Musse is a young woman with olive-green hair, with what appears to be short hair. During the events of Trails of Cold Steel IV as part of Class VII, she wears a long-sleeved dress and short skirt, with predominant shades of various blue colors. She also carries a small leather pouch that with a leather strap on her right shoulder.

As Mildine, her hair is significantly longer, down to her waist line, but it is unknown if it is her actual hair or not. She sports a blue flower decoration on the left side of her head and wears more formal attire appropriate for that of a duchess, with blue still being the most prominent color theme.

In her debut, Musse is shown to be playful and quite teasing, often messing around with Rean Schwarzer, much to his discontent. She continues to maintain this personality around him even after her intentions were exposed; despite this, she does admit that she prefers his type.

She is also a tactical genius, being able to quickly analyze the situation at hand, either formulating a plan well in advance or improvising on the go in an emergency. She dislikes relying on others and miracles, considering the latter dangerous to her planning. Likewise in battle, Musse prefers staying in the back, analyzing her opponents and supporting her allies with arts.

She appreciates Eastern culture, most likely passed down from her mother, as the kimono she wears was originally a keepsake from her.

Musse was born in western Erebonia as the daughter of Alfred de Cayenne and his wife, the daughter of Count Theodore and Suzanne Egret. During this time, she met Archduke Albert von Bartholomeus who was a friend of her father's as well as his niece Lif who became a friend of her's. She lost her parents in a maritime accident when she was 6 years old, after which she lived with her grandparents.

With her father dead, Alfred's brother Croire inherited the title of Duke Cayenne and transferred Musse to Heimdallr, where she would be entrapped in St. Astraia Girls' School's elementary courses for the next 10 years of her life. She became acquainted with Elise Schwarzer and Alfin Reise Arnor.[3] She dropped out soon after the Erebonian Civil War. During this transition, Mildine changed her name to Musse, the pet name used when she was still a child.[3]

Following her uncle's arrest, Musse contacted Aurelia Le Guin who had been an acquaintance of Count Egret since childhood and demonstrated her ability by informing the general of both the Northern War and the imperial government's proposal.[3] This demonstration convinced Aurelia that Musse should inherit the title of Duchess Cayenne instead of the greed-driven Wilhelm Ballad.[3] By this point, Musse had also already reached out to Vita Clotilde.

Gifted to see the current political situation within Erebonia like the pieces of a chessboard, she was able to predict the possibility of the National Mobilization Law, the war with Calvard and the spread of Erebonia's curse by the end of S.1205.[Note 1]

Musse's strategy against Osborne's schemes were twofold. The first was to ensure the position of principal at newly instructed campus would be filled by Aurelia. The second was to claim the seat as Duchess Cayenne and secretly gather volunteers for the Weissland Army, which would start its operations after the start of the Great Twilight. She decided to call the plan Mille Mirage.[3]

She signed up for the Class IX of Thors Branch Campus under Instructor Towa Herschel half a year later, supposedly inspired by the Imperial Army. Her actual reason for attending was to get close to Rean Schwarzer, the instructor of Class VII, hoping that his status as Osborne's son and the "Sacrifice" would benefit her strategical thinking. She eventually transferred to Class VII 18 August S.1204 in an attempt to get closer to him.[3]

While she has the grace of a noble and receives good grades in class, there is something unfathomable about her, as she is set on seducing Rean, for which her classmate Ash Carbide compares her to a jorougumo.[4]

During the provincial council in Ordis in Trails of Cold Steel III, Chapter 3: "Pulse of Steel", it is revealed that her name is actually Mildine Juzalith de Cayenne. She is tentatively elected as Croire's successor following Wilhelm's incompetent response to the Juno attack. Representatives of the Four Great Houses, such as Jusis Albarea, Angelica Rogner and Patrick T. Hyarms, as well as the imperial family, were aware of Musse's real identity. She kept it a secret from Class VII and the other students at Thors Branch Campus.

As preliminary Duchess Cayenne, Mildine reveals the plans she has been preparing with the other Four Great Houses. The imperial government is preparing for a war with the Calvard Republic, and they have set a number of actions in motion as a counter-measure. One of these includes reviving the former Noble Alliance's military prowess as the so-called Weissland Army, led by General Aurelia and Lieutenant General Wallace Bardias. She also realized a collaboration with Vita.

Musse eventually left her classmates once the Great Twilight started to begin her plan, using one of Grianos' feathers to leave the Gral of Erebos. She sent her grandparents away to a remote villa for their safety, aware that their current home would be marked. Musse was eventually picked up by the Pantagruel and met with Aurelia and Vita, expressing regret for her failure to stop the Great Twilight and ridden with guilt for enacting a plan that would sacrifice millions. She eventually comes to terms with this and decides to meet with her classmates one final time. Having Aurelia accompany her, she decides to head to Osgiliath Basin where she leaves behind clues for them. When they arrive, she indifferently tells them her intentions. Her classmates don't fully believe she would be capable of such an act, just as the tense reunion is interrupted by Cedric and his cronies. Atter they are driven off, Mildine decides to return to Class VII as Musse, entrusting Aurelia with the Weissland Army for the time being.

Musse accompanied Class VII for a visit to her hometown when they decided to settle on Ordis to start their search for Thors affiliates and certain VIPs. They arrived on foot, causing the guards to become suspicious. The group claimed to be soldiers making use of their free day; Musse convinced the guards by telling them she was Rean's fiancée.

Upon learning from Celestin that Theodore had gone missing alongside Fernand Hyarms, Musse contacted the family maid, Setsuna, to assist in rescuing her grandfather. She stopped the one of the Imperial Defense Force members from firing on Marquis Hyarms and later saw her grandfather off at Raquel.

Musse later suggested a "meeting spot" which she and Aurelia had organized after Elise and Tio were rescued, gathering representatives from Calvard, Liberl and Remiferia to discuss the inevitable war. In a private meeting, Musse eventually decided to entrust her plan to Cassius Bright. The meeting was interrupted by Ouroboros forces that greatly outnumbered the party; seeing no other choice, she opted to ram the Pantagruel into the Glorious, intending to go down with the ship; however, the Courageous II arrived before she could do so. She was later scolded by Rean for attempting such a dangerous method to resolve the situation.

She later attended the wedding of Olivert and Scherazard Harvey.

Musse is present at several events take that place before the main story, including the Branch Campus Academy Festival, the tasting of food for the Imperial wedding, aiding Tita Russell with the Orbal gear and the Erebonian Martial Arts Tournament. She also is involved in solving a mysterious case at St. Astraia Girls' School, going undercover and eventually foiling a devil's plot.

In her first main story appearance, Musse accompanies Rean with the rest of new Class VII to Ymir where Claire had invited them. There they are tested by Matteus Vander and Claire to see if they are strong enough for the important mission of finding the missing Prince. Claire, aware of Musse's strategical thinking, traps her and Ash in an electric force field. Despite this attempt, Musse eventually manages to find a way out of the barrier and heads with the rest of her classmates to assist Rean and Kurt.

Musse joins Rean in the Nord Highlands where they hunt for the missing Prince Olivert. The group encounters Darlton and the 23rd Armored Division, and solve a case involving automated tanks, the revolt of the 23rd Division and the rescue of the prince. The events that transpire seem to outpace even Musse's predictions, although she quickly realises that they must be missing something. Musse then witnesses the arrival of a giant Divine Knight in white which disables their aircraft and a strange occurrence with Rean's hair turning white and eyes changing.

Musse is present for the final battle against Elysium at Reverse Babel. 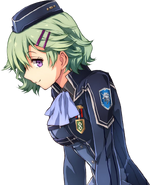 Flashback, Musse with her parents 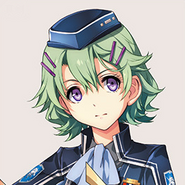 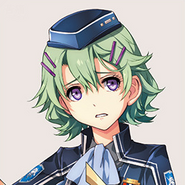 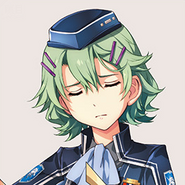 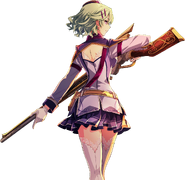 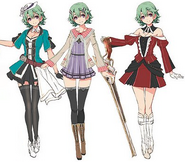 Promotional Screenshot of Musse with Sara Valestein and Gaius Worzel.