Time
v · e
Nacht Weiss (ナハト・ヴァイス), also known as the Silver Wolf (銀狼), the Silver Strike (銀撃) or Silver (白銀), depending what name the player chooses, is a junior bracer and protagonist of Akatsuki no Kiseki. He wields an orbal halberd gun.

Nacht is an average young man sporting white hair with light red eyes. He wears a patterned azure jacket, a crimson handbag around his right waist, khaki pants up below his knees and dark brown boots.

At the beginning, Nacht appears to be an average person who prefers to do things normally one at a time. After being paired with Chloe who prefers to push the envelope, Nacht always states his disagreement with her over-achieving mindset.

Before becoming a bracer, Nacht was a squad leader of the Nidhoggr jaeger corps. All his friends died on an operation and he deserted.

A man with an unknown nationality, Nacht Weiss strives to stray from his tragic past as a former Jaeger member to restart for a normal life as much as possible. Having originally intended to just take up a steady stream of small jobs upon becoming a Bracer, those plans get thrown out the window once he is paired up with Chloe Barnett for his partner, whose personality happens to be diametrically opposed to his. He is highly proficient in combat techniques while adapting to his surroundings around fighting with an Orbal Bayonet, whilst possessing knowledge of guerilla warfare from his usage of Orbal landmines. 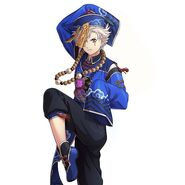