Sabre
v · e
Neithardt (ナイトハル), also known as Neidthardt the Mighty (のナイトハルト), is introduced as a major at the 4th Armored Division of the Imperial Army of Erebonia and a former instructor at the Thors Military Academy.

Neithardt is a tall well-built man with spiky lush blond hair and pale blue eyes. As an instructor, Neithardt wears a purple double breasted suit with white trousers and tall brown boots. He wears a matching purple cape with a gold trim. Neithardt is also frequently seen in his purple and gold officer's Imperial Army of Erebonia uniform as well. Neithardt uses a great sabre in battle.

Neithardt is a man who takes military conduct seriously. He is serious, stern, and he insures that students at Thors receive a valuable education. Neithardt carries expectations of his male students, making certain the 'men don't lose out to the girls' through use of the 'Man Way Method'. Nevertheless, he will toughen up all his students whilst showing them ways of how to handle one's self on a battlefield. He can be a bit rough around the edges around those irritate him or fail to show the demeanour of their station. but he also shows a seldom seen caring side beneath his stern exterior.

He also has the odd habit of wearing his uniform everywhere, even when teaching a swimming class.

Neithardt originally served the Imperial Army under supervision of Colonel Beatrix. As an excellent soldier, Neithardt reached the rank of Major at a young age. He is considered the ace of the 4th Armored Division, which is praised for its prowess under commander Lieutenant General Olaf Craig. Through Olaf, Neithardt has known Fiona Craig for ages and refers to her as "Miss Fiona".

Neithardt is on good terms with Major Mueller Vander, with whom he once served in the same battalion. The two share a healthy rivalry.

Neithardt is introduced as an instructor at Thors Military Academy whilst also an active member of the Imperial Army's 4th division. in addition to his teaching duties, Neithardt also takes it upon himself to train the male students in Swimming techniques as to not let them be surpassed by the female class members, an action that earns him some rebuke from fellow instructor Sara Valestein.

Neithardt is present at Garrelia Fortress, including during the raid by the Imperial Liberation Front. He leads half of Class VII to confront Vulcan at one of the compound's Railway Cannons. Upon the attack of the Noble Alliance and the onset of the October War, Neithardt remains at the academy to take on the Panzer Soldats, holding them off with his sword.

During the Fiona Craig hostage incident, Niethardt learned of her situation from an anonymous source the day before and immediately came running over in his military instructor's uniform during his journey to the 7th Armored Division. After assisting in freeing her, his odd stuttering conversation with Fiona in front of Class VII that bewilders them. He is implied to have a budding relationship with Fiona Craig, the daughter of his commander and idol of the 4th Armored Division.

During the Erebonian Civil War, Neithardt was mostly active in the west of Erebonia alongside Olivert Reise Arnor and the 7th Armored Division. he manages to obtain a Soldat of his own at the Twin Dragons Bridge where he duels Rean Schwarzer who compliments him on his skill and mentions how he has surpassed the level of proficiency that most members of the provincial armies possess.

Neithardt participates in the battle at the base of the Infernal Castle, reuniting with long time comrade, friend and rival Mueller Vander as they fight manifesting Magic Knights.

Neithardt, now a Lieutenant Colonel, continues to alternate between active duty in the Imperial army and work as an instructor at the main branch of Thors Military Academy. He is seen Chaperoning their Class I around on their field studies, including at the Imperial Capital during the preparations for the Summer Festival. During the Summer Festival, Neithardt has a short date with Fiona. He is part of the operations taking place to apprehend Calvardian agents hiding in the city. When The Gral of Erebos is summoned and Cryptids and Magic Knights appear in the capital, Neithardt is part of the forces acting against them.

After the start of the Great Twilight, Neithardt returns to the army full-time stationed at Dreknor Fortress. There, he and Olaf Craig safe keep Tita Russell and Elise Schwarzer until Rean and his companions infiltrate the fortress and overcome the 4th division who have slowly been giving in to the Erebonian Curse and are eager to overcome it. Neithardt and Olaf confront Class VII but are defeated. They allow them to go free. With Fiona's sudden arrival, Neithardt subconsciously reveals to the others his established relationship with Olaf's daughter by calling her "Fiona" unlike his previous "Miss Fiona".

Fiona gives Neithardt a charm on the last day before the Great War.

Neithardt and Fiona are mentioned by Elliot as having 'made progress in their relationship' however he does not appear in person.

Neithardt and Fiona Craig attending at the imperial wedding 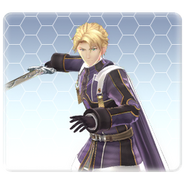