Male
v · e
Nial Burns (ナイアル・バーンズ,) is a journalist who works for the Liberl News Service.

Nial is a man of slender build, often sporting an unshaven, unkempt appearance. he has spiky green hair and brown eyes. Nial wears loose fitting trousers kept up by suspenders and a mauve long sleeved shirt with a metal arm ring and yellow neck tie. He wears brown and navy loafers, a wristwatch and can usually be seen with a cigarette in his mouth.

Nial has a coarse attitude and penchant for binge drinking and chain smoking that gives him a poor initial impression on people. Nevertheless, his exterior hides a sharp intellect, keen investigative skills and an unsurpassed passion for his work and he manages to more than live up to his title as the Liberl News' ace reporter.

He can go days doing research on a topic, while forgoing sleep and eating at the same time. Nial can be rough around the edges to people, but deep inside, he is a really kind person. He also deeply cares for his friends, and likes to help them out when they are in trouble.

Nial's relationship with his colleague is a little shaky. While Dorothy manages to take breath-taking photos, her airheaded personality and proneness to accidents frequently drive him up the wall and he curses his boss for putting Dorothy's training on his shoulders on several occasions. Nevertheless, Nial is willing to bail Dorothy out of trouble, suggesting that despite his exasperation with her antics, he's still determined to be a good mentor.

Nial Burns is a journalist who works alongside his partner, Dorothy Hyatt with the Liberl News Service.

Nial meets Joshua and Estelle Bright early on in their careers as junior bracers. They help each other out on numerous occasions, often with the former giving the latter information, or the latter escorting or coming to the aid of the former. Nial and his Partner Dorothy play a key part in the investigation of the missing airliner Linde, the Mercia Orphanage incident and coverage of the martial arts tournament in Grancel.

After the Martial Arts Tournament, Nial arranges to meet with Estelle and Joshua at the Liberl News Headquarters. There, she shows them information on Intelligence Division Members, Alan Richard, Kanone Amalthea and Lorence Belgar. He then tells the two that he is going to meet an informant who can tell him more about the Intelligence Division's plans.

Nial is caught trying to sneak into the Erbe Royal Villa and is thrown in the same room as the other prisoners. He is then rescued when Estelle and co. break into the villa to save Princess Klaudia.

After the Coup D'etat is thwarted, Nial writes up a huge expose on the coup and it is released in a special issue of the Liberl News. During the actual celebrations, Nial is then heard (in one of the drama cds) conducting interviews about Estelle and Joshua with all of their friends. Realizing that he can't publish their identities because of the Bracer Guild, Nial instead decides to write a thank you note at the end of one of his articles.

After the Queen's speech, Nial meets up with Estelle and Joshua at the Liberl News headquarters. There, he happily declares that his special edition is flying off the shelves and tells them about his little thank you in the newspaper. In S.1202-04, Nial managed to win a Fuelitzer Prize for his special coverage of the coup d'etat during the Queen's Birthday Celebrations.

As Estelle and her partner enter the Bracer guild in Ruan, Nial greets the two of them with Dorothy Hyatt. Estelle happily runs over to them and ask what they are doing in Ruan. Nial replies that they were here covering the election, of course, but then they heard about the ghost; so they stopped over at the Bracer Guild to get some info about it.

Jean suggests that working with the media might help the bracers with the situation and starts an information sharing meeting between the two groups. Hearing the sound of a potential scoop when a man starts screaming, Nial immediately runs of to the bridge, with the others behind him. At the bridge, Nial is seen watching the two groups blaming each other for the ghost's appearance and getting ready to brawl. As the fight is about to get started, the sound of a loot suddenly rings out and a man's voice is heard. Nial turns around with everyone to the river and he sees that Olivier Lenheim is back and travelling to the bridge on a boat. Sweat dropping, Nial and everyone else on the bridge decides to break up the fight and go their separate ways. Olivier then turns to the four and brags about his performance and asks the reporters to write about his miracle. Nial then turns to Estelle and Agate and asks if they still want to continue their earlier conversation and Estelle says okay. Nial, Estelle and Agate then head off to the Bracer Guild.

In the Guild Hall, Nial watches as Estelle and the others reconnect and then get back to the topic at hand. Estelle and her partner explain everything that they know. After the explanation, Jean praises the two for gathering a lot of data and Nial rules out that it is a prank against one of the mayoral campaign parties. Nial suggests that Dorothy goes with the party to investigate the potential source of the ghost sightings: Jenis Royal Academy, since he'll be busy covering the election. Happy, Dorothy declares that she will do her best to capture the ghost and Nial yells at her to just help solve the mystery.

Happy with the arrangements, Nial leaves the group to conduct interviews with both of the mayoral candidates. Before he leaves though, he mentions to Estelle that he heard about Joshua and that he will do his best to help her, so she must cheer up. He then exits the building and Estelle is touched by his awkward words.Dorothy turns to Estelle and tells her how it was a big shock when Nial had heard about it from Cassius and that he's been looking for a way to help her. Estelle proclaims that he's so sweet.

Nial was watching the chaos at Grancel unfold, commenting about the jaeger attack, when he saw Special Forces led by Kanone Amalthea arrive in the city. He told Dorothy to take as many pictures as possible until she couldn't do so any more, using the pictures to help clear up Kanone and the Special Forces' reputation.

Nial accompanied Dorothy and the others on the Arseille to infiltrate the Liber Ark. They attacked by Loewe and barely survive a crash-landing on the floating island, but they remain fine. After Nial regained consciousness, he woke Dorothy up. As Estelle and company continued to explore the Liber Ark, Nial decided to look around the Ark with Dorothy, warning her not to waste too much of their photo quartz on a single location. Like Dorothy, Nial appeared to appreciate the beauty of the Ark, even if it was deserted, claiming that the pictures could be useful in a special edition. 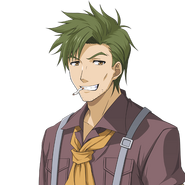 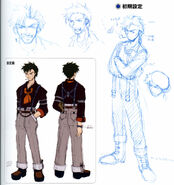 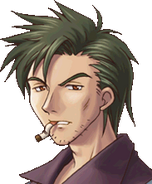 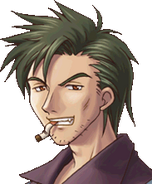 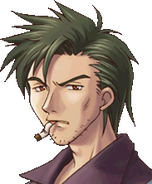 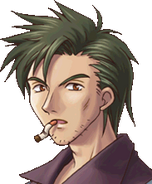 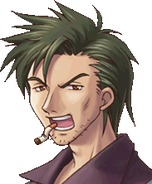 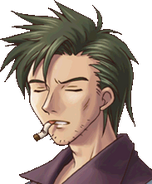 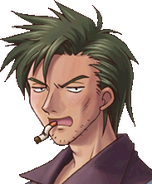 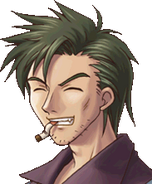