Nicholas is a tall young man with brown hair combed over to one side. He usually has the appearance of having both eyes shut. As a commoner student, Nicholas wears the green uniform of Thors Military Academy, consisting of a green blazer, brown trousers, white shirt and red tie. He is also commonly seen with a white apron on.

Nicholas is a kind hearted and compassionate individual. He never seems to be fazed by anything that goes on when he's in the Cooking Club's kitchens. He is warmly encouraging to all his fellow aspiring chefs, fostering good relationships with fellow Cooking Club members Millium Orion and Margarita Dresden even when they prepare unorthodox dishes. Nicholas seems to encourage them to do their best in making food. He has a love of cooking, and has learnt many recipes.

Nicholas is a commoner student at Thors Military Academy, and also the captain of the schools cooking club, located in the main building. He is exceptionally talented at his chosen pastime, having the ability to discern ingredients and quantities by taste alone. Nicholas is involved in several missions involving other members of the cooking club or ones which involve tracking down and acquiring recipe ingredients. During the October War, Nicholas makes meals on board the Courageous in its canteen.

After graduation, Nicholas takes employment with the Zemurian Railroad corporation as a chef in one of its buffet cars, where he gains great renown, appearing in Imperial Chronicle culture columns.

During the Great War, Nicholas is one of the unseen Thors Graduates that helps on board the Ark Royal. He is in charge of the dining and the supply train. 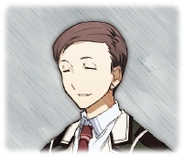