Nord Highlands (ノルド高原) is a mountainous region to the North-East of Erebonia and the North-West of Calvard.

Historically, the Nord Highlands have deep ties with Erebonia, yet they are not formally part of the Empire. The Eisengard Range serves as a natural barrier between the two. Apart from two imperial military bases, the Zender Gate and Imperial Watchtower, and one unnamed Republic base, the Nord Highlands consists mainly of vast expanses and a nomadic settlement.

Nord Highlands is known for their breeding and raising of horses. Most of the war horses used by the Imperial Army of Erebonia descended from Highland stock. The horses raised for Erebonia are one of the nomads' primary sources of income. The Golden Stallion, Erebonia's coat of arms, is said to depict a Nord-raised warhorse.

The Nord Nomads live in the Highlands in the northern part of the Empire. They are known throughout Erebonian history as people of spiritual faith, living their everyday life hunting and stock breeding. The people of this region have been nomads since ancient times, with their livelihood revolving around tending sheep and horses in these pastures.

Noteworthy landmarks include a great statue in the northern field (the empty shell of Lost Zem, an ancient quarry in the north-east, the triangular Rock at the center of the southern fields, and the Stone Circle, a ring of standing stones in the southern field. The stone circle acts as an access point to the Spirit Path.

According to the legends, the enormous statue represents the Guardian that once sealed away an evil djinn in the ancient quarry. Other legends suggest that this is the same guardian that gave the nomads' ancestors permission to inhabit the Nord Highlands.

The statue reminded Jusis Albarea of a tale that originated in the Dark Ages and spread throughout the Empire: "When the land roils with the tide of war, a colossal knight, wreathed in flame, come forth to quell the conflict."

Ruins spread through the Nord Highlands have revealed that it was once inhabited by a Neolithic civilisation, presumably prior to the Great Collapse. The presence of the Animist stone circles, Ancient Quarry and the winds importance in Nordic culture are all remnants of this ancient civilisation. Around 1,200 years ago, the empty shell of Lost Zem, the Sept-Terrion of earth landed here after a great clash with Ark Rouge, the Sept-Terrion of fire. Nordic legends tell of a great guardian of the land when referring to the statue. Emperor Dreichels, an illegitimate son of the deceased Emperor Valius Reise Arnor V had been shunned by his family, moving to the Nord Highlands. There, his noble nature and disposition endeared him to the locals and he was accepted. After the War of the Lions started, Dreichels was visited by his childhood friend Roland Vander who revealed the plight of the empire and the worsening war. Dreichels resolved to enter the conflict, joined by several trusted spear-wielding warriors of Nord who formed the core of his army. The descendents of this group, such as Wallace Bardias can still be found in the empire in the present.

On the evening of the 2nd day of Class VII group A's field study in the Nord Highlands, Private Zats and his comrade are attacked by a mysterious group that also attacked the Republican base. On the final day, the Elder alerts the camp to the attack on the Watch tower.

Rean Schwarzer and his friends head out to the southern section of the highlands. After dropping off an accompanying cameraman, they immediately head to the Watchtower to investigate. Class VII espy a suspicious figure after discovering the site of a mortar used to attack the tower, and they give pursuit. They are led the Stone Circle, where it turns out it is Millium Orion whom they have been chasing. She challenges them, to see if they can take out the Jaeger dropouts responsible for the attack.

Class VII are victorious and Millium accompanies them from thereon. They're led to the Ancient Quarry, in which they spot the Jaeger dropouts, led by an unknown individual by the name of G. The new figure is able to escape by using an artefact, the Demonic Flute to summon a huge arachnid spirit: Ginosha-Zanak. It devours some of the dropout jaegars before it is finally stopped. With the arrest of the jaegars, peace in the highlands is restored but the other mysterious group remains at large.

Rean and his allies are led to the Nord Highlands to scout out three more members of the scattered Class VII. They come across Gaius Worzel when Rean's team has been ambushed by Jaeger soldiers. Just like the Garrelia Fortress, the Watchtower has also been occupied by the Noble Alliance. This leads Class VII to do battle at the Watchtower against Bleublanc and Duvalie who are working with them. They are ultimately victorious and manage to destroy the signal jammer, preventing war with Calvard once again.

On Class VII's return trip to the Nord Highlands, they spot Mint at the entrance. She requests Rean search for her wristwatch. Class VII proceed to do so, finding several shiny objects throughout the facility. They head to the rooftop and they find the watch to be stuck on the antenna. Request the soldiers' assistance, Class VII delivers the watch back to Mint, and she boards the Courageous.

The Nord Highlands are mentioned as being the site of lots of tension between Calvard and Erebonia. A patrolling Calvardian gunship had inadvertently attack the nomadic settlement, mortally wounding Barkhorn in the process. Gaius, present at the time witnesses the death of his mentor before being bestowed with a stigma, prompting him to leave and train as a Dominion of the Gralsritter.

The Nord Highlands also features as the location for some final bonding events.

Rean and his allies return to the Highlands on the tip-of that Scherazard Harvey and Olivert Reise Arnor might be located there following their disappearance along with the Courageous II. They reunite with the Worzel family in the settlement and soon discover Calvardian tanks infiltrating the region. After confronting them, they discover them to be unmanned and apparently operated autonomously. After several more strange events including fighting a Simulacrum of Arios MacLaine atop the watchtower, they discover the Courageous II hidden behind a huge cloaking field, much bigger than any current technology on Zemuria should be able to produce.

By the time they reach the ship, Olivert has already mostly freed himself, his wife and the other crew members from the curse-affected dissidents that took them hostage. After retaking the ship, they suddenly come under fire from autonomous tanks from both Calvard and Erebonia. The ship manges to escape with the assistance of Aurelia Le Guin.

During the search for 'something they missed' and the source of the control behind the war machines, Sara Valestein discovers an autonomous Railway Cannon. Rean also confronts the damaged Simulacrum of Aidios, destroying it after a battle around the stone colossus. They are too late to stop the railway cannon from firing and it nearly destroys the Nomadic settlement. Grasping some unknown power, Rean summons his new Panzer Soldat, Tyrfing and destroys the ordinance just in time, crashing to the ground in the process. Above, a mysterious, Divine-Knight looking figure teleports in using spatial control and disables the Courageous II and Gaius's Merkabah before leaving just as quickly. Roselia and Zeit arrive in time to prevent catastrophic damage and injuries. Later, while discussing the evnts in the elder's tent back at the settlement, they make plans to head to Mishelam where Olivert's missing Sonorous Seashell has been traced to.

The Nomadic Settlement is a settlement that exists between the North and Southern sections of the Nord Highlands. While it is mostly stationed there during the calm periods, it is also easily disassembled and packed - so it can quickly be moved by the people of Nord depending on the seasons or circumstances.

Lake Lacrima (ラクリマ湖畔) is a lake in the northwest of Nord Highlands. The nomads settle here for a set amount of time during the year. Gwyn Reinford also has a cabin near the lake.

Ancient Quarry is a quarry built by the Neolithic Civilisation in the Dark Ages. Local legends dating back from the Neolithic era suggest that the Guardian sealed away an evil djinn in the quarry. This being was later revealed to be Ginosha-Zanak.

Cave Shrine of Aria (風霊窟) is one of the mysterious ruins scattered around Erebonia that once served as workshops for the Gnomes. Sealed within is a huge chunk of Zemurian Ore. Accessible in Trails of Cold Steel II.

The Watchtower (監視塔) is a military installation located in the south-east of the Nord Highlands. They are considered the first line of defense for the border with Calvard, overlooking one of their bases. 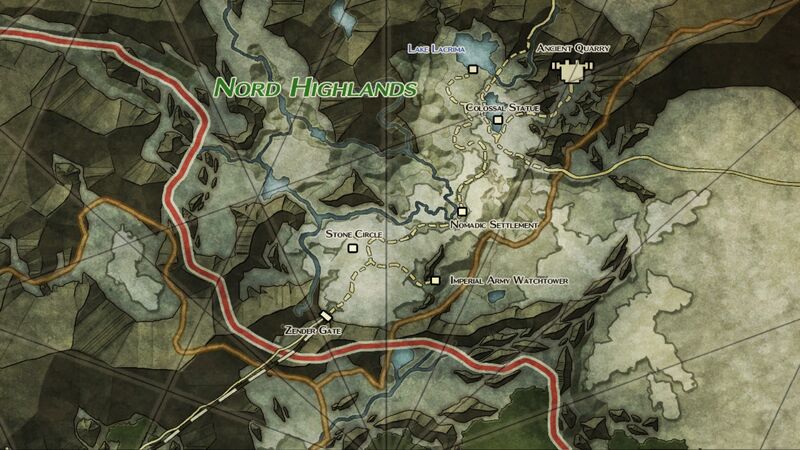 Stonehenge
Add a photo to this gallery

Concept art
Add a photo to this gallery

Retrieved from "https://kiseki.fandom.com/wiki/Nord_Highlands?oldid=50531"
Community content is available under CC-BY-SA unless otherwise noted.