Kiseki Wiki
Register
Don't have an account?
Sign In
Advertisement
in: Characters, Imperial Army of Erebonia, Trails of Cold Steel Characters,
and 5 more

Glaive (CS4, Reverie)
v · e
Olaf Craig (オーラフ・クレイグ), also known as Craig the Red (紅毛のクレイグ), is a military officer with the Imperial Army of Erebonia, holding the rank of General, and commander of its 4th Armored Division. He is a direct disciple to Vandyck. He is the widower father of Elliot and Fiona Craig.

Olaf is a very well built man with a stern expression and bright red hair, a trait he shares with his children. Olafs hair is spiky and short in contrast to the long and straight hair of his children. His sports a mustache that fuses with his short red goatee and sideburns. He wears the standard officers uniform of the Imperial Army of Erebonia, a purple greatcoat with gold and black trims and epaulettes.

When he was young, he had his scar, but with a clean shaved face exhibiting his youthfulness.

Olaf has a reputation as a the most fierce and intimidating general. However, in truth he is relatively easy going and quite cheerful, especially when it comes to his two children. Although he questioned Elliot's desire to pursue a career in music, he nonetheless gives him the freedom to explore it and is proud of how he matures throughout the series, often trying to hug him whenever he has the chance, regardless of his surroundings. He has the continous habit of trying to smother his son Elliot with a bear hug everytime they reunite without any embarrassment to those around him.

Olaf does not keep his cheerful disposition when on the battlefield. His fearsome skill in battle has earned him the nickname "Craig the Red" among the troops of the Imperial Army.

In his youth, the soldier Olaf Craig was originally part of the same military unit as Giliath Osborne, under Olaf's commander and teacher Vandyck. Through his wife Liana, Craig has developed a strong background in music.

Lieutenant General Craig is considered the most formidable general of the Imperial Army. His unit, the 4th Armored Division, boasts the greatest firepower among Erebonia's armed forces. He is often seen accompanied by Neithardt.

In S.1197, his wife Liana passed away, leaving behind Olaf and their two children, Fiona and Elliot. Elliot wished to pursue a musical career like his mother, but Olaf found this not to be fitting for an Erebonian man and urged him to join him in the military. Elliot was able to meet him halfway by enrolling in Thors Military Academy - even though he continued pursuing his musical career after graduating, Olaf showed no opposition, instead delighted by how mature he had grown.

Following the Hamel Tragedy, Olaf was one of two officials in the Sutherland Province authorized to allow visitors to Hamel, the other being Marquis Hyarms.

Olaf first met Class VII at Garrelia Fortress, where he was delighted to see Elliot. He showed the class a joint training session between his and the 5th Armored Division to showcase the power of Erebonia's military.

The following day, when several Achtzehn went rampant after engineers unintentionally added malicious programs to them, Olaf led several of his own Achtzehn tanks to intercept and destroy the rouge tanks.

During the October War, Olaf led his division in the fight against the Noble Alliance, eventually being reunited with his son a month after the end of the previous game. He was delighted to see him well once more and continued his fight, eventually seizing Twin Dragons Bridge with Class VII's help.

For his services during the civil war, Olaf was promoted from Lieutenant General to General.

Olaf would run into his son once again when Rean was tasked to investigate Ouroboros' presence in the region. Rean suspected that Olaf was hiding something if both the Imperial and provisional armies were not intervening. Olaf had heard of the archasisms roaming the region and expressed dismay that he could not help his fellow provisional soldiers. Seeing that a third party could potentially solve the situation, Olaf told the group that he was going to disclose state secrets to them, warning them not to let the public know or he would charge them with treason. He then sent them off to the other signatory, Marquis Hyarms.

Following the Great Twilight, Olaf had Alfin Reise Arnor and Tita Russell moved from Wilhelm Ballad's mansion in Saint-Arkh to Dreknor Fortress, to see what path Elliot and Class VII would take. As soon as they infiltrated the fort, he greeted them with Neithardt, informing them that Alfin and Tita were safe and that they had to come and rescue to the two themselves.

Upon arriving at his office, Olaf and Neithardt challenged Class VII to test their strength and will. The two were defeated after a long battle; Olaf was proud of his son's growth. The battle also gave him hope that the upcoming war would not be pointless, and he allowed Class VII to leave the fortress with Alfin and Tita. He saw them off as Alan requested to chase the Merkabah, but Olaf refused. He watched the curse manifest around Alan, commenting on how it was truly bottomless.

In preparation for the Great War, Olaf and his men were placed on standby as reinforcements for the 1st and 16th Armored Division's invasion of Liberl. His daughter Fiona is finally in a relationship with his most trust man Neithardt.

When he learned that Alan had been released from the curse, he was able to cancel Alan's request to transfer to the 2nd Armored Division, who would be seeing battle in the front lines.

He later attended the Imperial wedding of Olivert Reise Arnor and Scherazard Harvey.

On March 3, S.1207, the wedding day of Prince Olivert and Bracer Scherazard, a question came up about whom among the wedding guests are the strongest. This simple question ignites many competitive spirits, therefore, a friendly martial arts tournament is set up the next day as a informal celebration for the married couple. On March 4, S. 1207, the martial arts tournament is held in the Heimdallr Racecourse and watched by non-participating wedding guests. Olaf "Craig the Red" attends Erebonia's martial arts tournament where he teams up with "Black Whirlwind" Wallace Bardias and uses his glaive. They are defeated by Rean Schwarzer and Duvalie's team in the first round.

Flashback of the Craig family 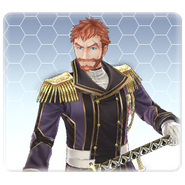