Ordine, the Azure Knight (の) is one of the seven Divine Knights of Erebonia.

Ordine is a large humanoid mechanical figure of azure color. Ordine is distinguishable from the other knights from its central horn, angular protective plates, many of which ending in spikes, and wing segments comprised of four tendril like appendages. in boost-mode, Ordine gains a luminescent set of blue glowing lines covering its body.

Black Alberich described Ordine, Valimar and Zector as being the three weakest of the seven Divine Knights. Ordine possess a so-called "Boost Mode" which increases its power. Crow once commented to Duke Cayenne on the non-omnipotence of Divine Knights, specifically commenting that Ordine wouldn't be able to annihilate Garrelia Fortress the way Crossbell's Aions could.

Just like its Awakener, Ordine wields a double saber.

Ordine's final (and only known) Awakener was Crow Armbrust. In S.1201, Armbrust, the leader of the Imperial Liberation Front, acting on the guidance of Vita Clotilde, successfully completed the trials to become Ordine's Awakener beneath Ordis, Lamarre Province in the Cayenne family's ancestral trial ground. He described the trials he went through to become Ordine's Awakener as identical to the trials Rean Schwarzer went through to obtain Valimar in the Old Schoolhouse.

Crow kept his Divine Knight and Awakener status a secret to the public for the next three years, including to his fellow classmates at Thors Military Academy. He finally unveiled it publicly when he revealed himself to be the ILF leader (previously masked and using the alias of "C") during the breakout of the October War. As a matter of fact, G. Schmidt used Ordine as the basis for the design of the Panzer Soldats, which became standardized Erebonian weaponry beginning with the war.

Ordine made its public debut to Railway Military Police Captain Claire Rieveldt. It flies towards off to Thors Military Academy where it relieves Scarlet from Class VII. He and Rean engaged in a battle which resulted in Rean's defeat, forcing Valimar to retreat and allowing the Noble Alliance to take control of the academy.

On two occasions throughout the war, Crow and Ordine effortlessly crushed the relatively inexperienced Valimar. Crow attributed this to Rean's relative inexperience. Towards the end of the war, they were finally defeated in the Infernal Castle thanks to Rean's bonds with his friends and newfound experience. Afterwards, Valimar and Ordine worked together to halt the Vermillion Apocalypse, but Ordine was struck in the heart during the process, causing the apparent death of Crow.

Because Ordine itself wasn't fatally damaged in the attack, Crow was later able to revive himself as an Immortal during his time as the Gnome agent Azure Siegfried. Ordine had been kept in a storage facility in the rebuilt Garrelia Fortress however George Nome was able to retrieve it. Ordine makes a cloaked appearance at Azure Siegfried's debut in Crossbell, flying away. It is later summoned when Rean and Siegfried confront each other below Heimdallr in the catacombs.

Upon the advent of the Great Twilight, Crow regains his memories and summons Ordine to restrain the rampaging Valimar. At this moment, six of the empire's seven knights were gathered.

Rean/Valimar and Crow/Ordine held the First Rivalry in the Bryonia Island Solar Shrine. Ordine lost, which would normally dictate the absorption of Ordine (and therefore the termination of Crow's immortality), but Valimar declared Ordine as its kin and refused to absorb it. Ordine went on to assist Valimar in every subsequent Rivalry. Outside of the Rivalries, Ordine saw engagements on board the Pantagruel, the operation to attack the shield-generating ship protecting the Draco Shrine and the battle to reach the Tuatha De Danann.

At the end of the Rivalries, all of the remaining Divine Knights activate the Sacrament program for Earth and Fire before they leave the world permanently. The Grandmaster states that the use of their powers was now 'almost impossible"

Elysium's ability to calculate and simulate alternate possibilities allows the spirit of Ordine to manifest in Crow's Tyrfing X temporarily where it communicates with its once awakener. 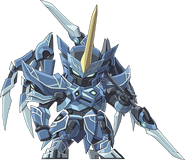