Osgiliath Basin (オズギリアス盆地), also known as the Forbidden Land (禁忌の地), is a depression in the central north of Erebonia.

The lamp-shaped artifact Eternal Kandelaar, capable of introducing higher elementals to a specific area, was found during an excavation in Osgiliath Basin.[1][2] It was immediately brought to the Imperial Museum in the Leica District, Heimdallr.

During the events of the Great Twilight, Class VII traveled to Osgiliath Basin to place one of the items needed to locate the Black Workshop and rescue their instructor Rean Schwarzer. While there, they receive a message sent by their classmate Musse Egret and meet up with her and Aurelia Le Guin to inform the of her motives for joining Class VII and creating the Weissland Army.

After her classmates convince her to come back and help them however, they are surrounded by the Thors Military Academy main campus and the Red Constellation led by prince Cedric Reise Arnor with Michael Irving now an instructor for the main campus and Shirley Orlando a student. While they attempt to arrest them and hold Aurelia in position with a sniper aimed at her, Class VII manages to defeat them in battle and Cedric calls on Testa-Rossa to take them out. Thanks to the use of their Panzer Soldats, they defeat Testa-Rossa as well and the Weissland Army arrives to help drive off the Main Campus and the Red Constellation Jaegers.

After the fight, Class VII places the item in the Basin and decide to return to Eryn. Due to Musse rejoining Class VII, she leaves Aurelia in charge of the Weissland Army in her place.

Following the rescue of Rean Schwarzer, Class VII return to Osgiliath Basin and find Beryl there as well. She hints at the Basin being the battlefield between the two Sept-Terrions in the past and tell the group that she senses a powerful Cryptid in the Basin and that defeating it might reward them. 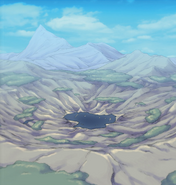 Cite error: <ref> tag with name "Sen4-060822" defined in <references> is not used in prior text.
Community content is available under CC-BY-SA unless otherwise noted.
Advertisement