The Pantagruel is a colossal aerial battleship measuring 250 Arge from stem to stern. Painted in silver with gold highlights and bearing the crest of the Noble Alliance on its hull, the ship's appearance is as striking as it is menacing, casting extensive shadows over the ground. The ship has significant cargo capacity, storing multiple Panzer Soldats despite their own bulk, having multiple docking bays for smaller airships and a network of passages and rooms.

The ship also carries significant armaments, primarily numerous vertical launch tubes that run the central length of the ship. It also bears two quadruple turrets mounted in casemates on either side of the ship's deck. After the Imperial Civil War began, two triple turrets were mounted on the underside, presumably to provide fire support for ground forces.

As befitting the flagship of the Noble Faction, the interior of the ship is lavishly adorned with fur carpets, wood panelled walls, and even a grand piano on its residential deck. It's forecastle boasts an expansive room as well, featuring luxurious furnishing, and a glass floor revealing a giant armillary sphere.

The Pantagruel first appeared publicly after the assassination of Chancellor Giliath Osborne on 30 October S.1204. After descending from the cloud cover and positioning the Pantagruel above the Imperial capital of Heimdallr, Panzer Soldats were deployed from the enormous airship's three belly-mounted cargo bays into battle. With the Pantagruel maintaining air superiority through its presence, the Noble Faction captured the Erebonian capital and took the royal family hostage.

The Pantagruel is thenceforth used as a mobile base of operations for the Noble Alliance, and is where leader of the alliance, Duke Croire de Cayenne deploys forces to counteract the 'unseen' opponents of the war. The ship is used in the Noble Alliance's attack on Ymir, where Rean Schwarzer and his divine knight Valimar are taken onboard. Rean meets several of the most significant members of the Noble alliance onboard, but resolves to escape after finding Alfin Reise Arnor who is also a prisoner there. After avoiding several Enforcers and facing Crow, Rean and Alfin are finally rescued by the timely appearance of Olivert Reise Arnor and the Courageous.

The Pantagruel and Courageous would later do battle above the skies of Heimdallr during the Imperial counter-offensive, dealing heavy damage to the latter.

Following the failure of the Noble Alliance's coup, the Pantagruel was seized by Imperial forces. It is then used as a transport ship for the Royal family, taking Alfin and several Erebonian delegates to the annexed province of Crossbell. The ship continues to float above the city and serves as both a sight of awe and intimidation for various citizens.

When the Gral of Erebos appeared, the Weissland Army, led by Aurelia Le Guin and Wallace Bardias seize the Pantagruel from Imperial forces, moving several Panzer Soldats on board. This was a part of their leader's plan to oppose Osborne's plans.

The Pantagruel now serves as the headquarters of the Weissland Army, mainly comprised of the remnants of the Noble Alliance and those loyal to its leader, Mildine. For a while, Ash Carbide is kept onboard but he manages to escape in his Hector unit. Vita Clotilde's powerful magic is used to cloak the ship from detection, which is very useful when it is used to rescue Class VII, Aurelia and Musse from Cedric Reise Arnor, Thors Military Academy and the Red Constellation near Osgiliath Basin.

The ship later serves as the meeting point for several nations involved in Operation Mille Mirage. They meet in neutral airspace between Erebonia, Calvard and Liberl and delegates from those and more countries attend. After a meeting and dinner which outlines the plan to oppose Operation Jormungandr and the Empire, the ship comes under attack from the only ship larger than itself, the Ouroboros battleship Glorious. Several Aions are deployed and soon Musse considers ramming the ship into the Glorious to score some mutual damage. The situation becomes a lot more favourable however when the Courageous II arrives to turn the tide of the battle.

The Pantagruel temporarily lands in the waters of Mishelam on the night before the war, protected by a forcefield. On the day of the Great War, the Pantagruel joins the front at the Nord Highlands alongside Wallace.

Concept art - The Pantagruel versus the Courageous 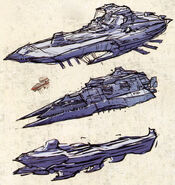 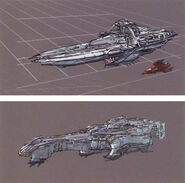 Weissland Army takes the Pantagruel back.

The Pantagruel alongside with Courageous II.