30 October S.1204
v · e
Panzer Soldats () are humanoid combat armours, developed in secrecy by the 5th Development Division of the Reinford Group on behalf of the Noble Alliance for the Erebonian Civil War in S.1204.

Initially described as "knights for the modern age,"[1] Panzer Soldats were thought to be modelled after the Divine Knight Ordine. Ordine was found in S.1201 underneath Ordis, provincial capital of the Lamarre Province, and was supposedly reverse-engineered by Professor G. Schmidt upon the request of Duke Cayenne. It was later revealed the Panzer Soldats were a 'graduation project' thought up by Franz Reinford to submit to Schmidt. After his death, Schmidt took the plans and developed them into something tangible to see the results of his first disciple's research.

Unlike the original Divine Knight's armours of Zemurian Ore, the Panzer Soldats are made of hardened steel. Reinford Group's 1st Factory had been dumping significant amounts of ore out of Sachsen Iron Mine in Roer into the black market for an unknown purpose. the secret 5th Reinford division manufactured the Soldats using the iron ore using Ordine and the Thirteen Factories' archaisms as a basis. The frame schematics were designed for feasible mass-production even with the Reinford Group’s technological capabilities.

Panzer Soldats were first employed in battle during the occupation of Heimdallr on 30 October S.1204. After the assassination of Chancellor Giliath Osborne, the Noble Alliance situated its flagship, the Pantagruel, above the Imperial capital and deployed Drakkhen units onto the city. The 1st Armored Division of the Imperial Army was powerless against the units and suffered major losses against them. As the war continued, the more advanced Panzer Soldats were slowly rolled out such as the Spiegel and the Hector.

Prototypes for the high manoeuvrability model, Kestrel and highly armoured model, Goliath were used in combat by Scarlet and Vulcan respectively. These prototypes were unstable and ultimately suffered engine failures after reaching their limits. After the October War, the Imperial Army saw the benefits of having Panzer Soldats and incorporated them from the Noble Alliance into their own, seeing effective use during the occupation of Crossbell, easily repelling all of Calvard's attempts to invade.

High-ranking members of the Imperial Army such as Olaf Craig and Neithardt gained Soldats of their of their own and new models of the old three (Drakkhen, Spiegel and Hector) were put into the mainstream. The Imperial Army was also able to create stabilized versions of the Kestrel and Goliath, although the latter continued to see very little usage. Specifications and information regarding these newer models were available in the Panzer Soldat Almanac (1206). Some units are also sent to both Thors Military Academy's main campus and branch campus, as training to pilot them has become part of the curriculum for most of the classes. Alisa Reinford, working in conjunction with Tita Russell of the Zeiss Central Factory developed jet propulsion booster attachments which allowed the Soldats to fly.

As the Zauber Soldats had sinister purposes behind their creation, Panzer Soldats continued to remain in the Imperial Army's arsenal. Makarov began creating a new series of Panzer Soldats - Tyrfing-class Soldats. Rean Schwarzer tests the S version against the Soldats of Fie and Laura in a training exercise in the Nord Highlands, and Gaius and Crow in Dreknor Fortress. Crow uses a Tyrfing X model.

The Soldats are metallically-framed at every mechanical limb with highly-refined alloy from the Sachsen mountains. Its presence on the battlefield is said to have a tremendous psychological impact to the human opponents, as they are easily captivated by fear of humanoid-resembling giants. What they may lack in firepower and armor compared to tanks, they make up for in mobility and versatility.

It was initially suggested the metal to be Zemurian Ore for it was the same alloy material to create the Divine Knights, but was substituted to the current metal due to being incredibly rare and hard to locate. The alloy was designed with integrated arts resistance to shield them from all Orbal Arts attacks. New model engines were implemented for mobility, articulation, and maneuverability to balance the weight of the refined metal, while improving strength to escape all sorts of restriction, especially steel wires.

Its only weaknesses are in terms of defense. Its physical weakness is the pivotal joints where its vulnerable enough even for over-capable humans with strength and skill can take one unit down. Its other weakness is special defense if their art-shielding capabilities are nullified, then Orbal Arts can deal damage. Soldats are known to have Reactive armor- a protective field to defend all attacks stronger than tank-fire, and coated with arts-resistance features to reflect all Orbal Arts. Makarov believes it is possible to circumvent this protective measure however. 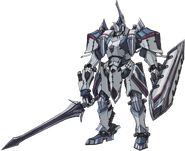 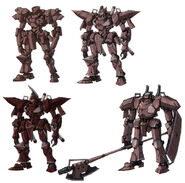 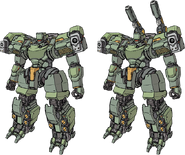 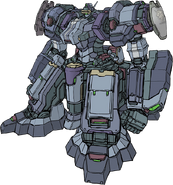