Patrick is a young man with straight neatly kept blonde hair of medium length and blue eyes. As a student, he wears the noble uniform at Thors consisting of a white blazer and trousers, with purple and gold accents. Later upon graduation, Patrick chooses to continue to wear a white suit, complete with a red cravat and a blue and purple waistcoat with tails.

When first met, Patrick behaves like a typical noble; very proud of his family name and thinks he is above all the others (apart from Jusis). He seems to be jealous of Class VII - he probably wanted to be part of it as well. For most of his first year at Thors, Patrick puts on an arrogant front and verbally degrades all of the commoners. Despite constantly maintaining a proud side, he can also lose his composure whenever he feels ashamed or his dignity is being attacked.

According to Celestin, even though Patrick may act like an arrogant idiot, he is very sensitive and easily hurt. That is seen when he feels obviously bad about what he said to Rean after their fight or what he did to Alan. Patrick is a nice person, but his pride generally prevents him from showing a kinder side.

It is also shown that Patrick has had a crush on Elise ever since their first meeting. He will often act insecure and even stutters around her. He has a hard time finding true friends, but after graduating from the academy, he has been on good terms with his former classmates.

Despite him being only a commoner, Patrick cares deeply for Celestin who is his sole friend and closest confidant. Through Celestin, the deeper qualities and layers of Patrick's character are revealed.

Not much is known about his past, except that he knew his personal butler Celestin since he was a child. Patrick has two older brothers named Ryan and Alex.

The first time he appears is when he tells Rean Schwarzer and Elliot Craig to step aside in order to let the nobility through on the first day of school.

He later introduces himself to Rean during Makarov's class and invites him to the noble's saloon, stating that even if he isn't a noble by blood, he is by name. Elliot explains to Gaius Worzel that the Hyarms family is very prestigious but slightly lower in the class system then the Albarea family, after that sentence, Patrick glares at Elliot. When Jusis Albarea comes to help Rean to turn Patrick's request down politely, he also asks him why he was not invited first. Patrick justifies himself saying that Jusis had been invited plenty of times but he always turned them down. After the conversation, Patrick leaves.

On June 23, when Thomas Lysander lets Class I study for themselves, Patrick and some of his "lapdogs" decide to challenge Class VII who have their practical exams on the very same day. When Sara Valestein hears the idea, she is willing to accept. Patrick refuses to fight the girls or Jusis, so Rean ends up having Elliot, Gaius and Machias assist him. The four easily defeat Patrick and his lapdogs. Refusing to believe that the commoners are better than him, he went on a tirade on the whole class, including Rean by stating that he's a nobody as he doesn't have a drop of noble blood in his veins. Gaius then asks him why he thinks nobles are better than commoners, in which he explains that the "superiority of nobles is self-evident" because of their long family line and distinguished lineage giving them dignity and pride. Gaius calls him out on this claim, which completely stuns him. Sara then explains to him what self-studies actually mean and that she wants them to point out what they did wrong today (with all the shameful play-by-play). The next day, Patrick is forced to talk with his classmates over what they did right and wrong.

Later (in July) he still struggles with what he said to Rean and his classmates, but would never be honest about it. Even Celestin realizes that something is wrong about Patrick. One day, he fights Alan in the fencing club and completely crushes him after pretending he was having a hard time against him. This completely crushed Alan's self-confidence. Patrick felt bad, but he never admitted it to anyone; however, he did skip the remaining fencing sessions as a sign of guilt.

While wandering around on the school yard, he suddenly runs into a girl from another school. Seeing her uniform, he is able to tell she must be from St. Astraia Girls' School. Patrick doesn't know what to say and stammers who she is and that he should have introduced himself first. After he learns that her name is Elise Schwarzer he realizes that she must be Rean's sister. But he blurts out what he thinks which allowed Elise to realize that Patrick isn't on good terms with Rean. He attempts to apologize but she leaves before he could muster one.

Shortly after that, Rean and Crow Armbrust cross his path and asks him if he saw Elise, and Patrick told them the direction Elise went. The three of them wonder how Elise was able to go into the Old Schoolhouse but after hearing her screaming, they sure that she is inside Alongside Rean and Crow, Patrick enters the Old Schoolhouse and takes the elevator down. There, they witness Elise being attacked by a giant suit of armor. Patrick now witnesses Rean's Ogre Power and comes to Elise's aid when Crow and Rean fight the opponent together.

Later, Patrick participates in the summer festival in Heimdallr. He meets Rean and asks if Elise will also be there (making it clear that he has interest in her) but Rean wants to know nothing about it.

When most of the students visit their home in October, Patrick was also told to come home but his "pride" as a member of the Hyarms family forbid him to do so (or so he claims). When he is at the station, he meets Crow and asks him where he might be going. Crow tells that he wants to hear the chancellor's speech in person - Patrick accepts the fact, yet finds it strange.

Shortly before the speech is held, he meets Rean and Millium Orion and tells them where he saw Crow and where he went. Later he and Ferris Florald listen to Giliath Osbornes speech via radio broadcast. With the rest of Class VII, he witnesses Osborne getting shot by C as a result of Vita Clotilde's life vision.

Rean later orders Patrick to defend the academy, leaving him baffled and unsure of what to do.

Despite the instructors and Class VII's attempt to defend Trista, the Noble Alliance manages to capture the small town. As Fernand was Patrick's father, who was also a member of the Four Great Houses, Patrick was put in charge of maintaining the academy. He created the "Order of the Lion" to help him in this regard, but his experiences with Class VII, particularly Rean, left Patrick conflicted about his role as a noble and the ongoing war. He loosely enforced the rules to make it look as if he was complying with the orders given to him, but allowed some of the instructors and students to secretly escape.

When Class VII resolves to retake Trista and the Academy, Patrick leads the Order of the Lion against them on two fronts. He is defeated and acknowledges the resolve of the others, henceforth cooperating and standing down. Patrick joins the other students in the assault on Heimdallr.

Following the civil war, Patrick decided to remain for his second year at the academy, realizing and accepting his shortcomings. He develops a close bond with Rean and the two graduate from the academy together, upon which he finds employment as the deputy of Marquis Wilhelm Ballad in Ordis. Patrick accompanies Rean on his first day as a instructor at Thors Branch Campus before leaving him at the station. He also helps out Class VII from time to time.

Patrick is present in Ordis, helping out when the bombardment of the city is taking place. He provides support to Rean and the new Class VII through his remote Brave Order.

Patrick is also present in the capital when the Gral of Erebos is summoned. He helps defend Elise and the students of St. Astraia Girls' School, and is left in charge of the defence when Vita Clotilde leaves to assist the Weissland Army.

Following the events in the capital, Patrick disappears and no-one knows his location. He makes a brief reappearance with Ferris Florald coming to the aid of Class VII in Ordis and occupying the RMP, but remains tight lipped on what he has been doing, and vanishing again afterwards.

It is not until the debut of the Courageous II that Patrick is revealed to have been helping the hidden Olivert Reise Arnor behind the scenes. He leaps down from the cruiser and engages the jaegars in combat.

Patrick joins the number of people gathered at Mishelam and is part of the conversation the male characters have about not having any regrets. He is later seen talking with Celestin about how he has been assisting Matteus Vander and his secret activities in the East of Erebonia.

Patrick is part of the efforts to bring Alan around before the start of Operation Jormungandr. Learning of Alan's plight by Rean, he uses the experiences he had from both the Fencing Club and his fellow classmates to show how far he has come. After defeating the enraged Alan, they help him come to his senses.

Patrick is present at Cassius Bright's martial arts tournament. He feels slightly out of his league in the presence of so many mighty warriors, but resolves to do his best, forming a team with Ferris, Vincent and Celestin. He states it would be a good opportunity to cross blades with old rival Rean once again. Patrick's team is eventually knocked out of the tourney by Cassius and Zechs Vander. 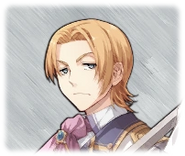