Paula is a young woman with dark blonde hair and brown eyes. She wears her hair up in high pony tail, tied with a red band. Paula wears the standard green uniform for commoner students at Thors military academy- a green blazer, white shirt, red tie and a plaid skirt.

Paula initially seems very critical of the ways of the nobility; she is frequently annoyed by Jusis, believing that he thinks he is better than her because of her status as a commoner. She shows a determination to out perform Jusis in the Riding Club, but even she acknowledges that Jusis is skilled at taking care of horses. Over time, she begins to have a more positive view of Jusis, and is more friendly towards him.

Paula decides she would like to try joining the horse riding club, despite her being a beginner. She is critical of the noble Jusis, believing him to be arrogant an egotistical, although over the course of the year and beyond, she eventually changes this view.

During the outbreak of the October War, Paula flees the academy with some of the horses. She looks after them but panics when she loses Lambert's prize horse Winston. Class VII help recover the horse and Paula joins the rest of the students in their efforts. Upon returning to the academy, she becomes much more skilled at riding and eventually succeeds Lambert as captain of the horse riding club.

During the Great War, Paula is one of the unseen Thors Graduates that helps on board the Ark Royal. 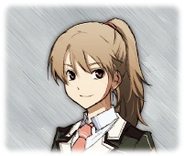 Add a photo to this gallery
Retrieved from "https://kiseki.fandom.com/wiki/Paula?oldid=65192"
Community content is available under CC-BY-SA unless otherwise noted.