Phantasma (影の国), also known as the Court of Shadows is another world created by the Aureole and is affiliated with another dimension. To keep up with the wishes of the Liber Ark citizens, the Aureole created Phantasma as a subsystem to process all these requests. It became a self-governing world capable of realising multiple possible worlds.

To fulfil the wishes of Liber Ark citizens and therefore to justify its existence, the Sept-Terrion of Space, the Aureole, created Phantasma as a fictional world. It is a reflection of the material world, albeit with a number of changes and with its own rules. For example, the normal rules of space and ontological geography do not apply here, and the manifestation of otherwise theoretical beings such as Fiends and Devils is possible.

It came into existence as a subsystem of the Aureole to help process the vast amount of wishes being made. This duality of the Aureole was something faction ruler Celeste D. Auslese kept in mind during her creation of the Sealing Mechanism. In order to have the plan succeed, they developed the Recluse Cube mechanism, a unique terminal which could directly communicate with Phantasma without having to rely on the Aureole as a medium. Using this artifact, Celeste implemented a fragment of herself into the Recluse Cube to act as its system operator.

Whilst a powerful artefact in its own right, Phantasma was still reliant on the energy provided by the Aureole to sustain its existence. Upon its apparent disappearance from the world, Phantasma sought the nearest feasible power source it could to sustain itself, in this case- the stigma of Kevin Graham, who was present when Campanella teleported away with the Aureole contained within Georg Weissmann's staff on the Liber Ark.

After lying dormant for hundreds of years whilst the Aureole is sealed onboard the Liber Ark, The Recluse Cube reactivates and Kevin Graham, Ries Argent and Gilbert Stein are drawn into the world of Phantasma. Starting in the Hermit's Garden, Kevin is tasked with navigating the seven planes of Phantasma and facing the adversarial Lord of Phantasma and their underling, the Schwarzritter. As they progress, they are joined by several of Kevin's companions and they face an onslaught of challenges and enemies placed before them in what becomes a race against time to stop Phantasma's effects affecting the real world.

Kevin is ultimately successful in coming to terms with his own self-worth and challenges, identifying the new source of Phantasma's power and true identity of the Lord of Phantasma as a copy of his Stigma. Kevin's party defeats this manifestation and managed to find a way back home to reality. Without a suitable power source, Phantasma begins to collapse and will eventually fade out of existence.

Later in the series, several comparisons are made between the world of Phantasma and unusual events in the real world, such as the manifestation of spirits, the compulsion to fight brought about by the Erebonian Curse and the existence of phase spaces.

This is the first place the group enters in Phantasma. As the world is a construction based on Kevin's consciousness, many of the features are recognisable to him such as the great tree, fountain and books from the library which he remembers as some reference to the sacred texts. When a glowing cube is found, the group takes it back to the Garden of Recluse to summon another companion. When they arrive, the heroes are made aware of recent events and their mission by a mysterious voice, later revealed to be Celeste D. Auslese, the original creator of the Garden.

The first plane that Kevin and Ries investigate, it is here where the Memory doors are introduced. Various monsters must be fought, deemed as 'fiends' and the glowing cubes discovered, allowing a Door to unlock that will lead them to the next area. The cubes for Tita Russell and Julia Schwarz are found in this area. At the end of the corridor, Kevin and Ries meet the mysterious Schwarzritter a servant of the Lord of Phantasma. The group face off against Bennu, one of the 77 devils mentioned in the Septian scriptures as a final adversary.

Despite thinking that they had made it back to reality, upon noticing the different gate and fiends, the party realises that they are still in Phantasma. The party must visit the Erebonian Embassy, the ship harbor and finally the arena in order to unlock the castle's gate. As they progress through the plane, the time of day rapidly changes from day to afternoon to night with more undead spirits changing to match. They find a replica of the Bobcat in the Harbor. After entering the castle, they reach a copy of the Sealed Area which has been drastically altered in scale. It is here they confront the Lord of Phantasma who summons Rostrum, another of the 77 devils. Defeating this devil, they are allowed to move onto the next plane.

After realising the purpose of the two gates, one on each road, the party separates into two groups guided by Kevin and the other by Ries. Kevin's group encounters a copy of Ries while Ries' group encounters a copy of Kevin. It is revealed that Schwarzritter placed the copies here, each made out of a grimoire- a shapeshifting fiend. The group eventually reaches the library back in the Garden of Recluse and decides to rest there, allowing Kevin to lead the mission. Joshua attempts to cheer up Kevin after confronting Schwarzritter. The party gains the cubes for Olivier and Zane during their journey on the roads.

The party must compete a mock version of the bracer training, visiting each area as it manifests on the map whilst facing Beastmen. The group must travel around the Balstar Channel, where the water here is replaced with lava, and fight a copy of Anelace. They then explore the Saint Croix Forest where Gilbert is held captive by monsters and they fight Shadow Scherazard. The party then reaches the Grimsel Fortress and are challenged by Shadow Agate. All cubes found in these three areas summon the characters whom the group fought their Shadows before. The group returns to the canyon but finds it is now suspended in space. They are assaulted Astarte and held captive within a force field. Ries arrives and tries to defeat the devil but falls to its strength. Kevin is forced to unleash a power that breaks the force field and defeats the devil. The Lord of Phantasma appears and mentions Kevin's guilt, bidding the group farewell. The group is given a cube that summons Estelle. Joshua activates it and Estelle appears. Because of his sudden released power, Kevin faints and Ries takes over his role for a while.

Ries, Estelle and the rest of the companions go on to explore the two labyrinths of Light and Shadow. In the first, they find Richard's cube and in the second, Renne's cube. Renne quickly deduces the nature of their situation and cooperates to reach a solution. Defeating the Arachne sisters and their mother allows the party to access the final cube which summons a purple haired woman who was the voice guiding the heroes through their trials in Phantasma. The woman reveals to the party that she's an ancestor of the Auslese Royal Family and a founder of Liberl Kingdom. Kevin, who just regains consciousness, apologizes for making everyone worry and listens to the woman who informs them that they are almost finished but that in order to leave this realm, they must first break several seals that are kept by powerful guardians - the duplicates of some of the most important people they had met in Liberl. Schwarzritter, who had appeared at the end of the plane, states that he will be among them.

Kevin and the party must face the four guardians of the sixth plane to continue. Each is accessed by bringing a specific person to a special stone monument and then completing a challenge in one of the plane's sub realms.

In the Monochrome Schoolhouse, where Kloe is needed, they must restore colour by defeating the monochrome knights to acess the Old Schoolhouse where they face the Raven Gang and Phillip Renard. In the looking Glass, Anelace is required here and heroes must fight the shadows of the Bracers Grant, Karna and Kurt in order to reach the top of the giant structure where Kilika, the receptionist of the Zeiss branch, awaits. The Impenetrable Fortress is where Richard is required. The group will have to visit each section of the fortress in order to find keys. The group confronts Maximillian Cid, Kanone Amalthea, General Morgan and finally Cassius Bright. The Black Ark is where Joshua is required. The group frees Gilbert and fights shadow copies of the Capua Family. In the command room, the group confronts various Ouroboros members, such as Walter, Bleublanc and Lucciola.

When the Seal of Blakc Ark is broken, the party can transport to the Farewell Arena. There they fight the Swarzritter and his Black Reverie Dragion. Joshua had already found out that the Schwarzritter was in fact a copy of Leonhardt, who was only hiding his idnetity due to Joshua's doubts. It is revealed Leonhardt knew Rufina. After defeating the guardians, Kevin and company can pass the mist in the Erbe Scenic Route and access Kevin and Ries' childhood home- Aster House. It is here that the two flal into a crevice leading to the final seventh plane- a one way trip to Gehenna.

Kevin falls into the Seventh Plane, followed by Ries who leaps after him, losing her habit. They are cut off from the others and must traverse a landscape based on kevin's understanding of Gehenna. This area has many bridges leading to several platforms that float in a Hellish void. Kevin is confronted with corrupted copies of those he has slain in the past including his mother, a child and a copy of Weissmann. Weissman summons the two gatekeeprs of Gehenna which Kevin is able to defeat when he comes to terms with his Stigma. They are rescued when the gates are openned and the rest of the party storm in to save them from flocking demons.

Another part of this area is a bonus dungeon called the Abyss, where four bosses can be fought.

Using the mechanics of Phantasma, the party activates the copy of the Arseille in the Jade Corridor and uses it to escape the seven panes. They emerge into a vast unending wasteland. They are pursued by Black Dragions from the planes but Gilbert summons his G-Apache and heads them off to give the others a chance to escape. Someone in this landscape stands the castle of Phantasmagoria where Kevin splits his party into four and confronts the copy of his Stigma once and for all. It takes the form of 'Anima Mundi' and threatens to envelop the real world in Phantasma should any one of kevin's companions fail. A golden Pater-Mater, red Ragnard and Reverie(Annilation mode) are amongst its guardians. Upon victory, Celeste summons the Gates of Heaven(天上門) which takes everyone, Gilbert included, back to reality. Phantasma is finally deactivated on their departure. 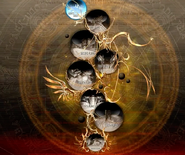 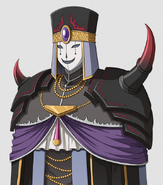 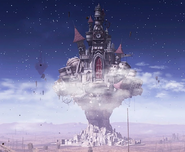