Phillys is a woman with red eyes and long black hair which sports a green headband with gold pins. She wears a fuchsia long sleeved blouse with a darker section at the top and gold buttons, as well as a white skirt. Phyllis wears a green shawl with tassels.

Phyllis is a cheerful and kind young woman whose excellent cooking keeps the bracers at the lodge in shape during their training periods and Estelle admits she loves the meals so much she frequently eats more than she should.

Phyllis is first introduced when she interrupts a training session between Estelle and Anelace in order to call the two of them for breakfast. After breakfast and before heading out on some field training, Estelle and Anelace Elfead speak to Phyllis who tells them that it's a good idea to keep their strength up in the field by taking food ingredients along and cooking up a quick meal. She then hands over a recipe book, the Nature's Bounty recipe and some ingredients so the two trainees can make more.

After Estelle's and Anelace's training sessions in the Balstar Channel and Saint-Croix Forest, Phyllis cooks them up another hearty meal and advises Estelle to stock up on supplies in advance in preparation for the next day. That same night, Estelle and Anelace are woken up by commotion outside and find a distraught Phyllis downstairs who's worrying over Kurt who seemingly suffered injuries while holding off a Jaeger attack on the lodge. Before Estelle and Anelace can get their bearings, a Jaeger comes in through the back window who they manage to subdue before being knocked out by a gas canister from a second Jaeger. After the two Bracer trainees wake up in Saint-Croix Forest, escape from there and return to the lodge, they find the place a mess with Phyllis nowhere to be seen, so they conclude she's been taken prisoner by the attackers.

When Estelle and Anelace pursue the hostage takers to the nearby Grimsel Fortress and defeat a third Jaeger waiting for them at the top, they discover the entire attack and hostage situation was a performance by Kurt, Carna and Grant to test their ability and judgement in a real-life crisis situation. After Kurt explains that this sort of simulated crisis is a tradition at Le Locle, Phyllis walks onto the scene as well and reveals that she, too, was in on everything and that her distress during the attack the night before was faked. After Kurt proclaims that both Estelle and Anelace have succesfully finished their training, Phyllis tells the two bracers that she'll whip up a special meal to celebrate.

Since Phyllis remains in Le Locle after Estelle returns to Liberl, she takes no part in any events in the game beyond the prologue.

Phyllis is a co-worker of Robert. 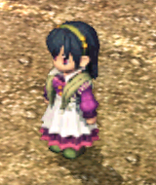 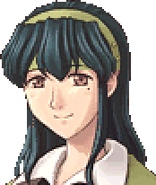 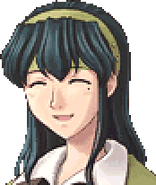 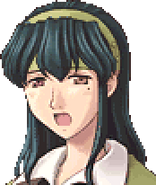