Female
v · e
Polly（ポリー）is one of the young orphans who lives at Mercia Orphanage with Matron Theresa.

Polly is a young girl with short blonde curly hair which is tied with a red ribbon acting a a headband with a bow on top. Polly has green eyes and is usually blushing with bright red cheeks. She wears a pale blue frock with a pink lacy trim,white ribbon, white socks and smart brown shoes.

Polly is the understanding one out of the orphans. She maintains a good level head. She knows when Clem has been up to no good and acts as the younger sister to the other orphans.

Polly is a young orphan who lives at Mercia Orphanage with Matron Theresa and the other orphans. She lost her parents at some unknown point prior to the game.

Polly is first seen when Estelle and Joshua come to Mercia Orphanage to get Estelle's badge back from Clem. She is not exactly seen during the events surrounding Clem, but can be noted to have partaken in the Apple Pie and is officially seen playing in her room with the other kids. If spoken to, she will apologize for Clem's behavior.

Later that night, as Polly and the rest are sleeping, Matron Theresa smells a fire and runs in to wake everyone up. Polly wakes up and follows Matron Theresa and everyone else downstairs in a attempt to escape. However. as they are about to reach the door, the roof collapses and they are trapped inside. Praying for help, a silver-haired stranger comes in and saves them. The stranger then calls for help from the nearby town and when they arrive, they put out the blaze and escort Polly and the rest to Manoria Village.

Polly is one of the children seen during Jenis Royal Academy's school festival. She comes along with Matron Theresa and the other kids. After having fun at the school festival, she goes with Matron Theresa and the other kids to watch Estelle, Kloe and Joshua's play. After the play, Polly goes backstage with everyone to congratulate Estelle, Kloe and Joshua about their play and appears delighted when Dean Collins comes in with a bag of donation money to rebuild the Orphanage with.

Polly then goes with Carna and the others back to Manoria Village. However, along the way, her group is attacked by bandits who knock out Carna and Theresa and run off with their money. She is unhurt, but stays with the Matron until a passerby comes along and helps them by taking them to Manoria Village. She is then seen crying in Kloe's arms when Kloe and the rest come into the inn worried, after hearing about what happened to them.

After Mayor Dalmore's arrest, Polly is seen happily playing with the other kids in Manoria Village.

Polly is first mentioned by Matron Theresa as being one of the ones who saw the "white ghostly shadow," but she is not seen until Estelle and her partner come to see her in Manoria Village where she is attending Kevin Graham's Sunday School.

Polly is amongst the orphan listening to Clem's story about a happiness stone when the topic of getting Matron Teresa a gift is brought up. Daniel and Clem rush off to find a happiness stone and Polly breaks Mary out of her trance-like state. Later, Polly is accompanying Mary along the Ruan coastline path to search for a present. They search the beach for shells and visit Manoria Village as well. On their way back, Polly is distracted by something and the two are separated.

Polly later finds Mary with the assistance of bracer Grant. They return to the orphanage and have a great party. 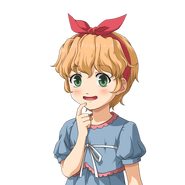