Female
v · e
Professor Seiland (セイランド) is a practitioner at St. Ursula Medical College in Crossbell. She originally worked for the Seiland Company but moved to Crossbell as Joachim Guenter's successor.

Professor Seiland is a tall woman with dark wavy blonde hair and blue eyes. She wears her hair tied back into a pony tail although some is loose and forms bangs. She wears a bottle green turtle-neck sweater with a pinstripe pattern over a purple shirt and white trousers. She wears purple stilettos. She wears a doctors pale blue coat with her name tag placed in the chest. Around her neck, Professor Seiland wears a gold necklace with a large amethyst.

in contrast to her predecessor who often absconded from work to go fishing, Professor Seiland takes her medical work much more seriously. She expresses frustration at the existence of mystical powers which heal others, saying one hand how she should feel rejoiced about Shizuku MacLaine's miraculous eyesight recovery, but mixed feelings on the other and how she doesn't like losing to such things as a medical practitioner, calling it it 'the stubbornness of the medical profession'. She claims to have great ambition for the doctors of the future, stating, 'To perform their work quickly and flawlessly. ...I want the young doctors be like that in the future.'

She is a rational thinker, summarizing that the most likely solution for the transformations induced by red Gnosis is mass hallucination, and expressing her limits of explaining the effect of Gnosis on biochemistry.

Professor Seiland is a pharmacology and neurology professor. During her time at the Medical University in Remiferia, she was a classmate of Joachim Guenter. After graduating kept in touch by writing each other letters. Once she found out that Joachim abused his medical knowledge which ultimately led to his own downfall, she was overwhelmed with regret.

Professor Seiland takes over from Joachim at St Ursula Medical College. The Special Support Section are enlisted to help her recover medical supplies after several supplies were stolen from the college and also gather survey results from those affected by Gnosis. When a case of 'Riboten poisoning' is diagnosed in a patient by Albert von Bartholomeus, Professor Seiland acknowledges his help and knowledge of a rare condition. She claims it is a 'disgrace' that her patient Shizuku was taken away from her, no matter how important the person doing so was and expresses her mixed feelings about how Shizuku recovers her sight.

Professor Seiland treats Eugent Reise Arnor III for his gunshot wounds as matter of state secrecy. She operates under strict patient confidentiality and doesn't report Class VII, fugitives of the state for their appearance in the college. She is present as Eugent reveals details about the Erebonian Curse but does not make any comment.

Professor Seiland is scheduled to attend a conference in Remiferia but went missing after being abducted by the Black Guard to assist F. Novartis alongside Erika Russell on a research and development project. She was taken to the Reinford factory where she was forced to work in exchange for the safety of the patients at St Ursula. Lloyd Bannings's team successfully rescue her after confronting a Simulacrum of McBurn and escaping the factory as is self-combusts. After her rescue, she remains as a field doctor at the base of the mountain temporarily. She treats Mireille for her gun shot wounds. 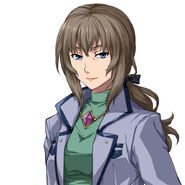 Akatsuki no Kiseki
Add a photo to this gallery
Retrieved from "https://kiseki.fandom.com/wiki/Professor_Seiland?oldid=50267"
Community content is available under CC-BY-SA unless otherwise noted.