Pulse gun & Orbal drone
v · e
Quatre Salision (カトル・サリシオン) is a young researcher enrolled in the Master's program at Basel Institute of Science. He was introduced in Kuro no Kiseki.

Quatre is a young man with effeminate features, medium-length silver hair and violet eyes. He wears a gray and black outfit consisting of a long coat over a black shirt with turquoise accents and a white tie. He also wears white shorts, thigh high black boots and a headset appearing device around his ears. Quatre uses an orbal pistol and is accompanied by two orbal drones, FIO and XEROS.

Quatre's neatly trimmed silver hair and effeminate face emit an atmosphere that makes him easy to approach. He gets quite annoyed when mistaken for a girl. Quatre can be flustered when speaking to attractive girls of his own age. He usually keeps to himself but diligently completes any tasks assigned to him. He is naturally curious about scientific phenomena and maintains a strong degree of loyalty for Latoya Hamilton who acted as his guardian, along with her other disciples.

Quatre is heavily implied to have suffered to an unknown extent at the hands of the D∴G cult, before being rescued presumably during the D∴G Cult Extermination. He is said to have come a long way in his recovery from the ordeal, having a family looking out for him in Basel. No conclusive links between Quatre and the personality of the same name in Paradise have been determined.

Quatre was taken in by L. Hamilton and was looked after by her disciples, members of the Basel Institute of Science, the Craftsmen's Street and people at the Verne Company. He came to view them all as family. Quatre is regarded as the Professor's favorite disciple. His major is researching and developing Orbal Drones that use the new Xipha and hollow cores for the basis of their artificial intelligence. He also helps out in the physical and bio-engineering labs, and has a strong attachment to the observatory, which is the symbol of the university and his link to Hamilton following her departure from Basel. Quatre was left in charge of her home and the observatory.

Quatre spends most of his time in the Basel Institute's observatory, completing his assignments and wondering when the professor will return. Concerned individuals such as Giscard ask about his well-being, but Quatre is taken into the employ of Bill Tausend who is desperately trying to reduce his workload and sees Quatre as the most pliable of Hamilton's disciples.

Tausend and Quatre meet with Van Arkride and the solutions office when they arrive in Basel to investigate the peculiarities in the city, as requested by Prince Sherid Asverl, their client. Tausend provides the bare minimum assistance he is obligated to, but Quatre is much more amicable and exchanges contact information. He is curious about the nature of Van's hollow core. They reach a misunderstanding when Van mistakes him as a girl due to his effeminate appearance, enraging Quatre. He later greets the students from Aramis High School, granting them access cards and talking with Renne about their contacts and affiliations. He accompanies them through the city.

When the solutions office tries to increase their access, they decide to call Quatre, who urgently hangs up in the middle of an unknown task. They hastily make their way to the mines and rescue him from a variation of Abyss Worm, earning the cooperation from him and Giscard of the Craftsmen's Street. Quatre had been investigating the abnormalities in the orbal lamp network. He then accompanies the party and acts a a guide around the city as they investigate the abuse case and network abnormalities. At the Institute they talk with professor David Callaghan. Quatre is surprised at the latter's shift in personality and liability to lash out, having known a different side to him previously. Having noticed some irregularities with Callaghan, they decide to investigate him, coming across Kaela MacMillan in the process who is also investigating the oddities in the orbal network. They become especially concerned after receiving an omnious call from Callaghan involving a plea for help and the flash of the Oct-Genesis.

The following day, Quatre is brought into the fold regarding the Genesis and formally joins the party. They speak with Yang Cronkite‏‎ and Quatre starts examining the Genesis. They head to the Auge canyon in search of Callaghan, encountering a Cryptid before reaching natural sciences field work site where they find Callaghan's research and his dead body. They soon realize they may have been a distraction as they hear word Basel is under attack from Archaisms and rush back. They make their way to the Institute and confront Melchior and Olympia. Quatre tries to rush in to save the Aurora supercomputer but is saved by Risette Twinings who takes the blast.

They finally resolve the incident with Callaghan, Almata and the Genesis when they track down the prototype Aurora and put a stop to Callaghans' plan to develop a reactor weapon. He had uploaded himself to the terminal to complete the calculations by abandoning his human limits and become an AI. After the Genesis which facilitated this is removed from the Assault Frame he was using, he is doomed to be deleted and gives his condolences. In his last moments, he repents and gives over all his research in a effort to do some good. A returning Hamilton and many others pay their respects, including Quatre.

Quatre later appears at the Solutions Office back in Edith, having accompanied Risette to make sure things are alright following her medical treatment. He recognizes incidents involving technology are becoming widespread across the continent and after being urged to be Hamilton, joins the Spriggans as a tech consultant.

Quatre would accompany the party through their request in Oración and during their time in Longlai. During the events in Edith, Quatre is absorbed by a Diablo sphere and forced to relive traumatic experiences from his childhood. Whilst in the Genesis Tower facing Gerard Dantes, Quatre is confirmed as being a survivor of the D∴G cult. He afterwards joins the efforts to retrieve Van from the Endless Boundary.

Quatre intends to return to Basel to complete a course over the New Year, but then plans on coming back to assist Van at the solutions office, much to his chagrin. 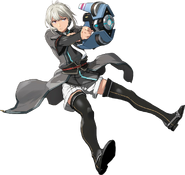