Historically, Raquel has played an important role as hub of the Lamare Province.

It is the nexus where railroads and highways from the provincial capital, Ordis, in the west and Jurai, Aragon and North Ambria in the north converge toward Erebonia's centre. Raquel Station is connected to the Transcontinental Railroad, the Lamare Main Line as well as the norhern Ober and Dnieper Branch Line.

This positioning led to the formation of an entertainment district. Theatres, casinos, gambling dens and high class clubs define the cityscape of Raquel. With the very nature of entertainment at its core, Raquel's public order is incredibly low and acts of violence are an everyday occurrence.

Maison Ecaille (メゾン・エカイユ) is a multiple-storey apartment complex. On the first floor live Rick and his wife, Meritxell. They were travellers who met each other in Raquel and decided to marry late S.1205/early S.1206. On the second floor lives Old Woman Esumi with Mona, the sister of Yuta who works in Ordis. Near the entrance of Maison Ecaille is the dog Barracuda constantly barking.

Casino - Alisha (カジノ《アリーシャ》) is a branch of the main casino in Heimdallr, Receptionist Runx inform. Peugot also serves as a receptionist. Customer Frederick says a couple of days earlier, he met Marjorie in the casino. Outside, Mimika and Kiruka to draw customers in their bunny costumes.

Ikaros Mart (イカロス・マート) is ran by Clark. He is assisted by Jan and Clark's younger sister, Kati, who serves as a tout outside the store. Jan says they were originally living in a rural area. Jan takes over at night when Clark's negotiations with Kleist Mall in Ordis take longer.

Pub & Dinner - Decken (パブ・食堂《デッケン》) is ran by Morley, a close friend to Ash Carbide's foster mother, assisted by Sireugh. A frequent customer is Brad, who's had a bad influence on Ash.

Pawn Shop - McEnroe (質屋《マッケンロー》) is ran by McEnroe, who, like most pawn shops owners, also serves as an important source of information on working of secret societies.

Bar & Inn - Hermit (バー・宿泊《ハーミット》) is ran by Julia. Her customers include Bianca; Gaspar, a traveller from Heimdallr; and Jozef, the father of Maya. Jozef was once a lieutenant colonel in the Imperial Army of Erebonia with remarkable skills, from which his daughter inherited her sniping abilities. He retired after the Hamel Tragedy, to which he appears to have some kind of connection. At night, Danny tried his luck at the casino and forgot his girlfriend Clonette whom he left somewhere in the city.

Club - Neue Blanc (高級クラブ《ノイエ＝ブラン》) can not be entered. Guide Jolies welcomes customers from all around Erebonia, including those who drive all the way from Jurai.

Raquel Chapel (ラクウェル礼拝堂) is the seat of Father Eaton, who is assisted by Sister Olfa.

Other NPCs in the area: Informant Miguel, an acquaintance of Ash, and Roza. At night, Clonette can be found looking for her boyfriend, Danny.

Introduction at Night in Trails of Cold Steel III 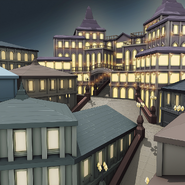