Revache was established around the same time as the Crossbell state, suggesting circa S.1134.[1][2]

It grew through practices like smuggling weapons and Mira laundering. As the armed conflicts between Erebonia and Calvard intensified, Revache expanded its services into the domain of human trafficking, drugs smuggling and mediating between jaeger corps.

In S.1196, Marconi assumes office as Revache's fifth boss. He starts a collaboration with former jaeger corps Zephyr commanding officer Garcia Rossi.[3] He also became acquainted with the Hartmann of Crossbell's imperialist faction. Together they would host the annual Schwarze Auction at Mishelam.

Cracks in the organisation's structure started to show up in S.1204, with the appearance of Republican Heiyue competing with Revache for Crossbell's underground scene, the Special Support Section invading the Schwarze Auction and Hartmann's general political incompetence.

In order to regain its foothold, Revache obtains Gnosis through the D∴G Cult and administers it to its members. The drug, however, causes its members to misbehave and act selfishly, which work in Joachim Guenter's favour in reviving the cult to its former glory. Eventually, all their members (except for Marconi and Garcia Rossi) wind up as demons before they are beaten by the Special Support Section.

Garcia re-appears as an underling of Supreme Leader Rufus Albarea. When challenged as to why he should support such a regime and takeover, especially following what he said to Lloyd Bannings in prison, Garcia claims his objective is to rebuild Revache, and helping to train the Black Guard is part of the process of doing this. It is possible this was not actually Garcia's true objective as later on he switches sides and assists liberation forces. 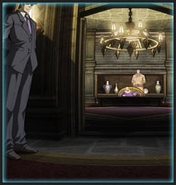 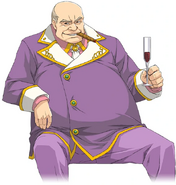