Male
v · e
Rex (レックス) is a photographer with the Imperial Chronicle and an alumnus of Thors Military Academy's Class V ('04-'06).

Rex is a young man with spiky red hair and yellow eyes. He is always seen wearing his woollen cap. During his days as a student at Thors, Rex wore the standard green uniform for commoner students, albeit usually with a camera hung around his neck.

Upon his graduation and subsequent employment under the Imperial Chronicle, Rex is seen with very casual clothing, sporting a chequered button-down shirt over a black long-sleeved turtle neck, a padded sleeveless jacket and jeans with red sneakers. He carries around an even more advanced camera and a pale green shoulder bag.

Rex is extremely passionate about his hobby, often to the point of others considering him naive about the implications of his actions. His passion for taking photos particularly shows in the quality and professionalism of his photographs. He appears to be particularly fond of taking pictures of women. This was initially done without permission and he sold the pictures to other students, which others considered to be sketchy and lecherous behaviour, fearing less than honest intentions.

Concerned for his under-classman, Fidelio succeeds in getting Rex to see a clear picture of what it means to be a photographer and what the pictures taken will tell the world. Rex seems to be holding onto a promise to get permission, expressing disappointment in himself for not realizing his mistake.

Rex is usually seen around Thors campus taking pictures as part of the Photography club. After it emerges that he has been taking pictures of girls without their permission and selling them, his friends and fellow club members fear the worst. After discovering the quality of his photos and convincing him of the true values of a photographer, Rex pledges to mend his actions.

With the start of the October War, Rex is amongst the number of students that flee the town into East Erebonia. Rex can be found at Garrelia Fortress's proving ground where he is excited taking pictures of everything that is going on, hoping to capitalise on being a wartime photographer and make a name for himself chronicling the war. It is due to this that he initially refuses to join up with Rean Schwarzer and the other students, not joining their efforts on board the Courageous until much later.

Rex returns as a photographer for the Imperial Chronicle, and a co-worker of Vivi. He is concerned by her disappearance but also asks Rean to take up her duties of finding scenic spots around the empire and taking photographs. in return, he gives some of his photographs of women to Rean. Some of his subjects include Ouroboros members like Shirley Orlando and Mariabell Crois, prompting questions as to how he managed to obtain them.

Rex was sent to take photos of Crossbell's independence ceremony when it was interrupted by Rufus Albarea, who declared himself the Supreme Leader of Crossbell. He was able to avoid Ilya Platiere's cursed dance, suspecting that the people were being affected in a manner similar to the Erebonian Curse a year ago, but was unable to contact Rean due to the blockade.

Rex as a student 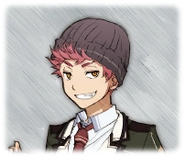