Chief Roberts is a middle-aged man with bushy brown hair, eyes and a moustache. he wears a long blue edged white jacket over a dark blue shirt and black trousers. He also wears a yellow neck tie and blue shoes.

Roberts is a very excitable and cheerful personality, although he can occasionally get very nervous and acts quite absent-mindedly . He cares for Tio Plato and looks out for her, but is easily teased by her. When panicked or nervous, Roberts often stutters and seeks excuses, begging for forgiveness.

Roberts moved to Crossbell after recommendation form the Foundation for his skills in network communications.

Guillaume is an old friend of his and they keep in touch occasionally. Despite this, he had no idea that Guillaume had opened up a repair shop.

Roberts is in charge of the Epstein Foundation's branch in Crossbell and the oversight of the installation and maintenance of the Orbal Network Project. He also helps with installations around the city and overlooking Tio's Orbal staff, which is is used to feedback data to the Foundation. He enlists the SSS's help to get testing for a new staff. He loves being the city of Crossbell and is eager to see all of its attractions. He is always looking out for Tio, asking her to check in often and making comments whenever he sees her out and about.

Roberts and his crew are very obliging to the SSS, allowing them to use the network to help solve their investigations and track down a mysterious hacker. He often looks after Jona Sacred, expressing his regret that Jona doesn't like 'delicious vegetables'. It is through Roberts that the SSS get permission to use the Orchis Tower's roof to search for the missing bracers. He also introduces the party to Pomto and asks that Lloyd collect various account details to help develop the network.

Roberts helps to hack the Orchis Tower later and undo the communications jamming.

Roberts is first seen in a discussion with Jona and Tio in the former IBC building, talking about obtaining the help of Reinford and Verne for the orbal network project. Lloyd overhears him receive a call from the Leman headquarters where he discusses that he came to Crossbell on a Urgent request, that something happened at the St. Ursula Medical College and something was on it's way to the conference.

Robert is later found helping at the Medical college after Supreme Leader Rufus Albarea takes over. He leaves the investigation of the Reinford Arsenal to Lloyd's group and handles information gathering. He warns them of Professor Seiland's disappearance as well. Roberts is called in to help investigate the huge terminal found behind the mirror in the castle of mirrors. He expresses his shock but nevertheless performs some analysis on the technology, believing his research will make great strides.

Robert is present on the Arseille II when it arrives for the final battle at Reverse Babel. 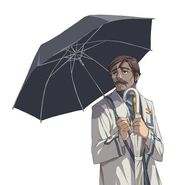 with umbrella
Community content is available under CC-BY-SA unless otherwise noted.
Advertisement