Wind
v · e
Ronaldo Griffin (ロナード・グリフィン) is a senior investigator at the First Division of the Crossbell Police Department in Crossbell.

Ronaldo is a tall young man with long ginger hair worn loosely and unkempt. He wears a black undershirt with a yellow double-breasted jacket on top, with a green combat jacket worn above that as well. He has navy trousers with a belt that is full of various key chains and has a holster with a sidearm.

As an investigator Ronaldo stops at nothing and will resort to violence if necessary, who lives by the principle to condemn the crime rather than the criminal and is an efficient partner to work with.

Hello there, beautiful. May I have a moment of your time?
Please be aware spoilers for Akatsuki no Kiseki may be present in the following section. Hit [Show] on the right if the show must go on. Adios, amigos!

Ronaldo grew up in a poor family in Crossbell City's Downtown. He was in the same class as Jillian Sky in Sunday School and, in spite of their rich-poor gap, they became childhood friends. Jillian's sister Sheryll even referred to him as 'big brother'.[1] One day, Sheryll goes missing on her way home from Sunday School and, sensing the impending doom in Crossbell, Jillian's parents move back to Erebonia. Ronaldo promised Jillian he would become a detective and track down Sheryll. Ronaldo kept his promise by studying hard and became the youngest ever to pass the CPD's detective exam.

Four years later Ronaldo meets Jillian once again. Their love for each other reignites and, as an elite detective, Ronaldo proposes to Jillian. At tha time, Ronaldo was also close to Jillian's superior, Samuel Leitner, but struggled with his often insane plans. Just before his wedding, he was pulled into Leitner's team for Sergei Lou's D∴G Cult Extermination. Among the bodies of children used for the cult's rituals, he found the corpse of Sheryll Skye. Ronaldo fainted and was carried out by Arios MacLaine. The state he found Sheryll in left him undecided on his marriage with Jillian. Associating Crossbell with Sheryll's death, he feared his home country and began travelling abroad frequently, looking for remnants of the cult as his love for Jillian gradually vanished.
There we go, the end of spoilers. Thank you for your time!

Ronaldo becomes acquainted with Nacht Weiss and Chloe Barnett during his investigation of the "N Fund", which targetted Genten's store manager Fernand. Their partnership had a rocky start due to misunderstandings and Nacht's suspicions, but after resolving the case he started cooperating with them in the Cross Project. As the only adult in the group, he watches over time and sometimes give them tactless advice. Over time, however, he warms up to the group.

In Chapter 2: "Robbery at ZCF", Rolando reunites with his old associate Samuel Leitner, who staged a terrorist attack to rectify Crossbell. In Crossbell's sewer system he confronts Samuel about what happened during the D∴G Cult Extermination. He is shot by Samuel, and loses consciousness as he begs for his life to make amends for Crossbell without running away. Fortunately, Ronaldo was carrying one of the charms against bullets he usually took on trips outside Crossbell, and was lectured by Jillian on recklessness afterwards. The charm that protected him against bullets, however, was only the engagement ring for Jillian he pretended to have thrown away.

Back in office, Ronaldo pursued Nidhoggr and investigates their involvement in Sheryll's death. 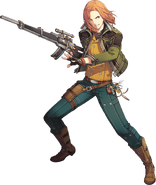 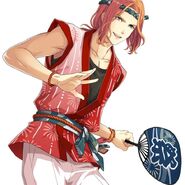 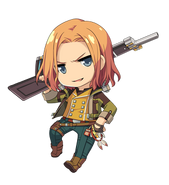