Kiseki Wiki
Register
Don't have an account?
Sign In
Advertisement
in: Pages with broken file links, Stubs, Characters,
and 7 more

Roselia appears as a young girl with blonde hair long enough to touch the floor, deep crimson eyes and an archaic way of speaking. Roselia wears a long sleeved white shirt with a red laced corset, long red skirt comprised of several layers and brown knee high laced boots. At times, Roselia can shift into her true adult form, which grants her additional height, and her clothing adapts slightly, with detached sleeves.

She carries her personal staff with has a large crystal on the red, glowing red when in her possession. She can float upon this staff in which case, it resembles a broomstick.

Roselia is secretive and cryptic by nature and often withholds information. She has a slight mischievous streak and irresponsible nature, and can get into clashes of personality with other opinionated individuals such as Wilhelm Ballad. Nevertheless, she has a long history of wise council and helping to guide others.

The name 'Roselia' originally belonged to the Holy Beast that fused with the elder of the Kin of Fire (now known as the Hexen Clan) in order to handle the Great Collapse.[4] The current Roselia is the second iteration; she was originally a familiar in a position similar to Celine's and after the first Roselia was betrayed by the Gnomes and perished in S.306,[Note 2] she followed her predecessor's instructions to visit the Luna Sanctuary to inherit her predecessor's memories and mission.[4]Now, she is the Holy Beast sworn to protect the Ark Rouge, titled the Burning Sphinx (《翼ある灼獣》ローゼリア).

Roselia collaborated with Emperor Hector Reise Arnor I to defeat the Dark Dragon. Together with the head of the Gnomes, they sealed the Hector's Divine Knight Testa-Rossa in the depths underneath Valflame Palace.

The next record of Roselia's activities are dated S.942, when Roselia guides Lianne Sandlot through the trial to become the Awakener of Argreion, the Argent Knight, at Lohengrin Castle.[2][5] Ten years later, she guides Dreichels Reise Arnor through the trial to become the Awakener of Valimar, the Ashen Knight, near Trista.[6][7][Note 3] Lianne Sandlot succumbs to mortal wounds during the conclusive battle with the Vermillion Apocalypse. Roselia took Lianne's corpse[2] with her back to Eryn, leaving behind only rumors regarding the disappearance of Lianne's corpse. Half a year later, Lianne revives before Roselia's eyes and leaves Eryn to wander through the world.[2]

Around S.1000,[Note 4] Roselia collaborated with the Septian Church to eradicate the rampaging vampires in Heimdallr. The last remaining True Ancestor of the race herself, Roselia defeated the Elder Vampires single-handedly and ended her own bloodline of vampirism. The novel Red Moon Rose is based on these events.

Although Roselia stayed on good terms with Lianne Sandlot for centuries until S.1186, when the latter met the Grandmaster of Ouroboros and decided to cut ties with Roselia, they would not meet again until twenty years later.[9]

Sometime around S.1203, Roselia ran into Ragnard, the Holy Beast sworn to protect the Aureole. Ragnard had been dismissed of his contract, so it is likely that the two simply had a casual conversation.

The two other witches in the series, Vita Clotilde and Emma Millstein, were both trained by Roselia. Vita lost her parents at a young age. She displayed great affinity for magic and Roselia adopted her as one of her disciples. Vita's talents make her Roselia's greatest disciple to date. Emma lost her mother, Isola Millstein, in an unfortunate accident and was raised by Roselia in her stead.

Roselia also created their familiars: Grianos for Vita, and Celine for Emma. Creating them drained a considerable amount of her life force, so she appears to others as a seemingly young girl. In areas with high spiritual energy, Roselia is able to harness it to temporarily return to her adult form. Vita eventually joined Ouroboros following an unknown incident, while Roselia sent Emma to Thors Military Academy to test Rean Schwarzer, who would be Valimar's Awakener.

Roselia makes her debut, first appearing a mysterious young girl that only Rean Schwarzer can perceive, at least initially. She visits him on Bryonia Island and in the Sutherland region near the Isthmia Great Forest. Roselia also has an encounter with Arianrhod in the Langudoc Canyon. Her true identity is revealed in Heimdallr when Emma introduces her as her grandmother and the leader of the Hexen Clan. Roselia promptly explains the dangers of the Dark Dragon, Zoro Agruga's reawakening and rushes into its lair after giving the party sealing tags that will suppress the possessed Calvardian unit. She helps to subdue and seal away the dragon, protecting them from the miasma on its defeat. After this, she withholds any information, teleporting away as Siegfried enters.

With the turbulent times in Erebonia of S.1206, Roselia decided to make an appearance before the protagonists and team up once again with the Septian Church, this time with Dominion Thomas Lysander. As the elder of the Hexen Clan, Roselia is tasked with the safekeeping of the Ark Rouge, the Sept-Terrion of Fire. She accompanies the party to the manifested Gral of Erebos and uses her magic to send Class VII inside. She grants Emma her staff before the portal closes, which transitions from red to purple as it does so.

When the Great Twilight began, Roselia assisted in the group's escape by teleporting both new and old Class VII to Eryn. Roselia trains the Class by granting them access to the Saint-Gral Labyrinth where she acts as the final trial. She helps them recuperate and assist Class VII new and old locate the Black Workshop through the planting of magical stakes at spiritual hotspots around the Empire. She then leads the Hexen Clan in performing the spell that transports them there. Roselia would continue to drop in and out of the village on her own missions.

It is during her absence that Gilbert Stein with the help of F. Novartis, who wants to test his new device, lays siege to the village. Roselia appears after Class VII oust him and Rose performs the final punishment before Campanella arrives to escort him away.

Roselia becomes a figure of key importance when she asks Class VII and Celine to come to the Lunar Sanctuary where they create the signs of conflict in order to activate the ancestral artifact of the Kin of Flames, the Spectral Moon Mirror, which reveals the history of the Empire. Vita, Aurelia, and Rose are the obstacles Class VII must face, with Roselia revealing her true form and duty as the Holy Beast of Fire. After learning the secrets of the empire, Rose thinks Lianne and Dreichels foolish for not involving her. She is particularity enraged when Rufus Albarea backstabs and slays Arianrhod, casting a high level fire art which does no damage to the impervious shield of El-Prado.

Roselia, with assistance from Emma and Vita, cast a barrier around Mishelam for the short break before the day of the Great War. During this overture, she enters her true form and takes part in a drinking contest, with Vita chaperoning her. Despite her power and age, she is swiftly outpaced and collapses from inebriation. Roselia joins one of the teams attacking the fake Salt Pales in Operation Shining Steel before helping to teleport everyone to the final battle against Ishmelga-Loge. Following the battle, Roselia, as the head of the Kin of Flames, orders the remaining Divine Knights to activate the Sacrament Program of Ark Rouge and restore Crow's and Millium's souls.

After the Great War concluded, Roselia confirmed that the two Sept-Terrions and the Divine Knights had left Zemuria. Sometime around March S.1207, the spirit veins began to act up once more, causing spirit paths to reopen once more. Unsure as to what was causing the calamity, Roselia also made contact with Zeit, who similarly to Ragnard had been dismissed of his duties as a Holy Beast.

Roselia accompanies Vita, Celine, and Emma to investigate the appearance of Isola Millstein's last diary, and the appearance of the White Shrine. There, they discover her familiar and after passing a trail, receive a message recorded by Isola herself.

Rose comes to the aid of the Courageous II in the Nord Highlands when its engines are destroyed by the Great One. She uses her magic to help get the aircraft down to the ground safely. Afterwards, through her and Zeit's magic, they locate the source of the communications black out, and location of the Sonorous Seashell, helping Rean's party to teleport there.

Roselia takes part in the final battle, teleporting the party onboard the Arseille II and then bringing five of Erebonia's strongest warriors on board, enchanting their weaponry and deflecting Reverse Babel's Keraunos. She then helps get the large assault party into Reverse Babel, and later their Soldats.

A copy of Roselia and her true form are encountered in the Infinity Corridor.

Roselia was revealed as someone who appears before Rean Schwarzer on numerous occasions, but his companions are unable to perceive her existence. She is not a normal human being and her powers are unlike any that have appeared so far. Her relation with Azure Siegfried and Rutger Claussell is unknown, but what the three have in common is that they should not exist.[10] 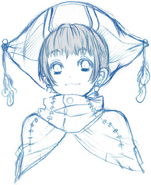 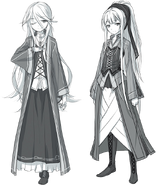 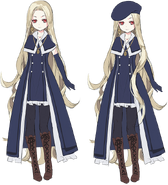 Rex's Photo of Roselia and Celine 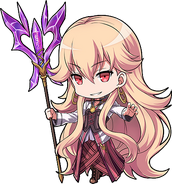