Rutger is a veteran, muscular man of tall height who wears the standard black-leather Zephyr uniform for its regimental members albeit with a few modifications. In Rutger's case, this includes a long black leather overcoat over a pale green shirt with white pants and black leather boots and gloves. Purple straps and harnesses hold a variety of ammunition and explosives for him.

Rutger is armed with a large buster glaive, a customised S-weapon that serves as both a powerful blade and a rapid-firing firearm. The two edges of the blade separate to allow the weapon to fire. The weapon has multiple handles to allow Rutger to hold it in a variety of ways, depending on its usage.

Rutger is a determined man with strong resolve. He gathered the members of Zepyhr together and shows strong leadership capabilities, to the extent that the corps almost fell apart without him. He treats his subordinates as friends, frequently going out drinking or gambling with them. He has a great deal of sportsmanship, willing to give opponents a fair chance even if he was already in favourable or advantageous position, in cards or on the battlefield.

Rutger is dedicated to the jaeger way of life, refusing to consider morals and personal feelings if they conflict his paid job. However, he has a caring, parental side, as shown by taking Fie into the group and adopting her, as well as making plans for her future should anything happen when he is no longer around. He claims to be immensely proud of what Fie has grown up to be.

As corps commander of the jaeger corps Zephyr, active in the northern regions of Zemuria, Rutger earned himself the alias of Jaeger King. In S.1196, Xeno was sent to assassinate Rutger, but failed. Rutger then invited him for a drink. When Xeno's organisation began going after him, Rutger personally intervened and destroyed them, gaining Xeno's trust and loyalty.

Sometime while leading his jaeger corps, he found and adopted Fie. Rutger trained Fie for jaeger duties, but also saw her as if she was his own child as she reminded him of what it meant to be truly human.

In S.1203, Rutger and his long-time rival Baldur Orlando of the Red Constellation corps fought each other until both lost their lives. It was revealed in Trails of Cold Steel IV that their battle was actually orchestrated by Black Alberich, near the resting place of Zector. The continuous battle for three days and night straight served for the reappearance of a pseudo-Rivalry.

After his death, the members of Zephyr each went their own way and Sara Valestein, who witnessed the decisive battle, took in Fie. Xeno and Leonidas hinted at Rutger's revival at the end of their battle against Class VII in the Infernal Castle during the Erebonian Civil War.

Rutger was indeed revived as an Immortal at the hands of the Gnomes to become the Awakener of Zector, the Palatinate Knight. After his revival, he resumed corps duties with Xeno and Leonidas. He followed the Gnomes' instructions to gather information, which led him to a chance encounter with Fie near the ruined village of Hamel. He stood once again before Class VII in front of Juno Naval Fortress, but stepped aside per Aurelia Le Guin's intervention. He got his chance to fight with the group in the Gral of Erebos, where he fought alongside Shirley Orlando, Kreuger and Siegfried against Fie and Sara, among others.

With the Great Twilight ushered in, Rutger continued following the Gnomes' orders and visited Hamel once again in his search for a stage for his Rivalry. He also wished to recruit Ash Carbide into Zephyr. Ash refused, and after a brief scuffle, Rutger called Zector in. Juna and Kurt piloted their Soldats and were able to hold Zector off, just as Sara, Fie and Elliot arrived. After Fie stated that she would help Rean to the very end, Rutger decided to give them a break, proud of his adoptive daughter's newfound resolve, but warned them that he wouldn't be as lenient in their next encounter.

He later participated on the attack on the Pantagruel.

In the end, the Draco Shrine would come to serve as the stage for his Rivalry. However, Alberich had sealed the shrine to prevent the Second Rivalry from starting prematurely. Rutger encountered Class VII by chance, stating that he wanted to see what Alberich had done with his own eyes. He told them that he would not mind starting the Rivalry early if they could unseal the shrine. When the barrier dropped, he was excited for the upcoming fight and ordered Leonidas and Xeno to prepare the stage for his Rivalry.

His decisive battle against the combination of Valimar-piloting Rean Schwarzer and Ordine-piloting Crow Armbrust ended in his loss. Rean attempted to spare Rutger as he did with Crow, but Rutger refused, having died once and wishing to move on. Rutger complimented Fie's growth and stated that he was proud to have been her adoptive father, just as Leonidas and Xeno arrived. He tasked the two regimental commanders with leading Zephyr in his absence as he peacefully vanished.

Flashback of duel between Baldur Orlando and Rutger 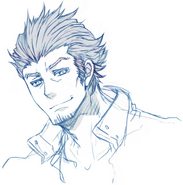