The Salt Pale (の) is a large unidentified structure which manifested in the Principality of North Ambria in S.1178. The widespread destruction and consequences of its appearance are collectively referred to as the North Ambrian Disaster (ノーザンブリア). While the cause of the disaster is still unknown, the Salt Pale originated from the Beyond.

The object appeared on Saturday, July 1, S.1178 at 05:45.[Note 1] Bishop Alexei of the Haliask Cathedral contacted the High Seat of the Septian Church in Arteria reporting an enormous, cloud-scraping pillar in one of the suburbs of Haliask. The High Seat immediately dispatched two Gralsritter, Dominion No. 8 Barkhorn and his squire, from a neighbouring nation. The object took its name from witness accounts, which described it as a pillar because of its height, approximately hundreds of arge tall and "capable of scraping the clouds".[1] The pillar was surrounded by a hurricane of salt. The hurricane expanded at a steady rate and salinified everything within reach, humans and buildings alike.[1]

After the second day, an enormous evergreen forest was crystallised and destroyed by the salinification process. Bridges collapsed and the foremost highways were no longer usable. The North Ambrian head of state sought refugee in a neighbouring nation whereas citizens were forced to flee south beyond the Graeve River, out of the hurricane's salinification effects.[1]

Although neighbouring countries were not directly affected by the salinification winds, North Ambria suffered major losses. Three out of five governmental districts, the City of Haliask included, were destroyed. One third of the North Ambrian population and many tourists fell victim to the salinification.[1]

The salinification process continued for three days in total. When the hurricane stopped, the Gralsritter in charge of the Pillar immediately started their investigation. They found the 2,5 arge tall remains of the original pillar, inscribed with peculiar engravings.[1]

Since the object still contained its original power to salinify, the Gralsritter carefully removed the object using the Gleipnir, a sacred high water pressure cutting tool, from a distance. They transported the object to Arteria where it was stored in the innermost room of the cathedral.[1] An unknown organisation working with the Imperial Army's Intelligence Division questions whether what remains of the Salt Pale is actually still in Arteria.[2]

In the meantime, the Septian Church immediately offered relief to the North Ambrian people and set about rebuilding the damaged chapels and healing both the physical and mental wounds of the population. Children who lost their parents during the disaster, such as Georg Weissmann, were taken into custody by the church and cared for in gospel facilities until adulthood.[1]

The northern part of the affected area was taken under the control of the Septian Church and was designated a restricted area for unspecified reasons.[1]

Kevin Graham uses a crossbow belt with a tip embedded with a piece of the Salt Pale to assassinate Georg Weissman. This method is noted to be particularly effective in ensuring the target is dead and Weissman expresses his surprise that such a thing would be utilised just for the sake of his own self.

Twenty-eight years after the North Ambrian disaster, five objects resembling Salt Pales emerged in the Erebonian empire. They emerged in Ordis, Saint-Arkh, the Nord Highlands, the Eisengard Range and Lake Ebel, alongside the Empyreal Fortress Tuatha De Danann prior to the Great War in Trails of Cold Steel IV. These structures appear to have been made from the residue left in the ground from the original pale. These Salt Pales did not salifinify their surroundings, but were spiritually linked to Tuatha De Danann, bolstering its defence with barriers.[3]

In order for the united Class VII to infiltrate the mobile fortress, their allies from various factions split up into five teams to investigate the Salt Pales. At the end of each, they found guardians created by the Salt Pales based on memories of places in Erebonia.[3]

The teams that infiltrated the Salt Pales included:

Upon defeating the guardians, the protection each pale granted unto the Empyreal Fortress was temporarily suspended and Class VII was able to infiltrate the Tuatha De Danann. 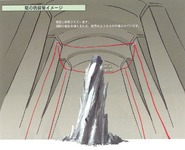