Sword and Gun
v · e
Sara Valestein (サラ・バレスタイン), known by the nickname Purple Lightning (; Eclair), is the instructor of Class VII at Thors Military Academy and a former bracer.

Sara is a strong woman with amber eyes and long cerise hair tied up behind her. In her regular days as a Bracer and her time as a teacher, Sara wears the same yellow and black minidress and brown high thigh boots. She also wears a steel blue overcoat with several white belts which she wears open and loose.

Upon resignation from Thors and returning to the Guild, Sara renews her outfit and allows her hair to grow out into a long pony tail. She adopts a denim corset and long slit skirt as well as a yellow long-sleeved shirt, brown gloves and laced boots.

Sara carries two weapons- an orbal pistol and a sword, both matching the cerise shade of her hair. Her sword is double edge like a falchion, but it has a few extra bladed attachments on the hilt the pistol is quite complex and features several interlocking plates. Both weapons have a green orbment inside of them.

Sara is a very laid back individual, reluctant to do any hard work if she can avoid it. Sara is a very caring individual, and is not afraid to give a pep talk or encourage students under her care, however her preferred method is usually to let others sort themselves out, stepping in only when necessary. She has a strong preference for older men, but gets sensitive when others bring up her age. Sara is very aggressive when she gets some alcohol into her system and although she can handle a great amount, she turns into a completely different person once she has had too much.

Sara lost her biological parents as the result of the North Ambrian Disaster. She was taken in by a former colonel of the fallen nation's army and the founder of the Northern Jaegers, Colonel Valestein. Sara grew up in an environment where she understood that her birthplace had fallen into ruin and that jaegers, who brought in foreign money to support the people, were considered heroes.

Admiring her foster father, she decided to follow in his footsteps by joining the Juvenile Jaeger Squad (少年猟兵隊) at the age of 10. After three years of heavy training, Sara was deemed experienced enough to be invited into the main squad. This was the first time she participated in actual combat. She later described her time there - continuous fighting covered in blood and gunpowder smoke - as "hell". Before long she earned herself the nickname of Purple Lightning.

At the age of 18, Sara had grown to the rank of company commander when she received a mission to participate in a proxy war between a noble family and a large enterprise in a remote region of Erebonia. Their opponents were the jaeger corps Nidhoggr. Although the Northern Jaegers were heading toward victory, the situation threatened the lives of citizens in the neighborhood and as they worked to ensure their safety, Nidhoggr struck back.

Driven into a corner, Colonel Valestein jumped into battle and saved them from the perilous situation. In his dying breath, he asked Sara to decide if she wanted to continue working as a jaeger. As Colonel Valestein passed away in her arm, she screamed and lost her consciousness.

She regained her consciousness in a camp of the Imperial Army of Erebonia, where she was treated by Second Lieutenant Beatrix of the medical battalion, who were sent to the region to review the damages caused by the jaegers. Lieutenant Colonel Neithardt and Lieutenant Colonel Mueller Vander were also there. Learning that her comrades had already returned to North Ambria, Sara fled the camp without a word of gratitude and follow their trails. When she returned home, she received a warm welcome from her comrades and the citizens. Although they had lost their supreme commander, they received an enormous amount of mira from the nobles they were fighting for so they knew no one had to starve to death in the upcoming winter.

Although relieved, Sara cried over the situation that they had to spill the blood of innocent neighbouring nations to feed their poor homeland. Recalling her foster father's final words, she ultimately decided that the jaeger life was not what she wanted and fled to Erebonia, finding employment with the Bracer Guild. Her experience in battle quickly landed her as an A-Rank bracer with a steady income, part of which she would send to her homeland.

During the attack on Erebonian Bracer branches in S.1202, Sara was in North Ambria at the time. She would have come to the guild's aid were it not for Enforcer Sharon Kreuger, who stalled her long enough that the Erebonian branches were forced to call on Cassius Bright for aid.

She witnessed the decisive battle between Rutger Claussell and Baldur Orlando in S.1203. Following the fight which left both men dead, Sara soon found Rutger's adoptive daughter, Fie Claussell, and began taking care of her.

While working as a bracer, Sara was soon scouted by Prince Olivert Reise Arnor, who wished to find an instructor that would help encompass the idea of Class VII - a class consisting of a mix of nobles and commoners. Sara accepted the offer to act as the class' homeroom instructor and temporarily left the Bracer Guild for her new job, bringing Fie along with her. Sara was known to unload large amounts of her paperwork onto Towa to complete for her, but did take her job seriously when it came to training the classes in combat on the Academy field. She used autonomous combat shells, and then when her students were ready, challenged them herself.

Sara's laidback personality caused some problems with Vice Prinicpal Heinrich. She was able to teach the class well, despite her slovenly appearances and her somewhat carefree attitude towards her students. She usually leaves the field assignments in the hands of her students while she visits the local tavern, only making a move if a situation emerges.

After the class dissolved, Sara returned to the Bracer Guild, with Fie following her.

Sara returns in the Lamarre Province, tracking the various jaeger corps active in the region. She identifies Nidhoggr, Red Constellation and Zephyr but the fourth remains a mystery until later. She is detected whilst spying but is allowed to go about her business. Sara would later join Rean in an information gathering exercise in the casino in Raquel, helping subdue an informant and trading information with the Jaeger King.

Not long after, Sara joins Rean's small group taking back Juno Naval Fortress from the Stahlritter and the Northern Jaegars. She confronts them about what they are doing, preventing them from taking their own lives. It turns out they had been humiliated after Erebonia annexed North Ambria and were trying to find some pride and a place to die. She is able to convince them through another perspective.

Sara later on joins the Class VII reunion and large scale, multi-agency operations to track down Calvardian agents operating in the capital. She is amongst the group that go to confront the reborn Zoro-Agruga. She also takes part in the assault on the Gral of Erebos, where she, alongside Fie, takes on the combined forces of Rutger and Shirley Orlando.

Sara later helps retrieve Rean from the Black Workshop, and from thereon joins the efforts of the Radiant Wings across Erebonia. She remarks how proud she is of the class and their development during the lead up to the final rivalry in the Tuatha De Danann.

Sara joins Rean in the Nord Highlands, helping to investigate the disappearance of Olivert Reise Arnor and his wife Scherazard Harvey. It is there they confront mysterious automated tanks from Calvard and a Simulacrum of Arios MacLaine. When the group discovers automated forces on the move, Sara is dispatched to disable the railway cannons, but finds that they are sealed shut.

Sara is later amongst the forces launching an assault against Reverse Babel. 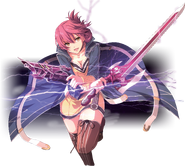 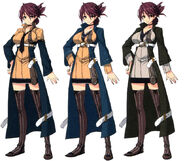 Sara and Fie Claussell during a flashback in the ending. 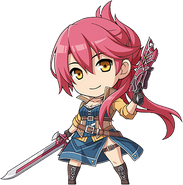 A screenshot of Sara.

A screenshot of Sara having drinks with Rean Schwarzer.

A screenshot of Sara.

A screenshot of Sara with Fie Claussell. 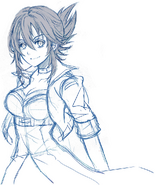 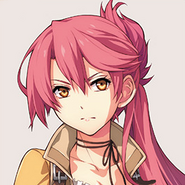 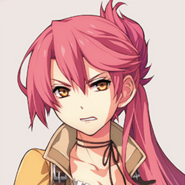 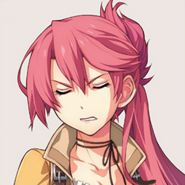 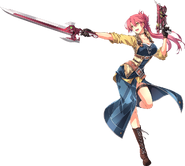 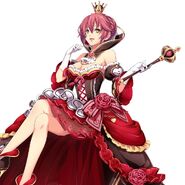