Scarlet is a tall woman with long orange hair, and emerald colored eyes, one of which is covered in a magenta colored eyepatch. She has a tattoo on her left arm. She wears a cerise and black minidress with two tails splitting on each side reaching her side ankles. the top of Scarlets outfit is decorated with white floral patterns and a lace trim around the translucent neckline. Atatched to her outfit are several belts with gold clasps as well as a series of golden rings and hoops. She wears brown fingerless gloves and black stiletto shoes which are visible beneath black woven leg coverings that split at the ankle.

In her Church attire, Scarlet wears a typical sister's uniform - a long black dress with headpiece and golden medallion.

She carries on her a Templar sword, a weapon typically used by members of the Gralsritter. This weapon can extends itself as it is composed of several interlinking segments attached to a rope, allowing it to act as both a whip and a blade. Scarlet also uses a Gralsritter crossbow, and in fact can be seen dual wielding both weapons in her later appearances.

Scarlet tends to display a somewhat mature, but bewitching personality with a playful side, and even as a charmer when she speaks out her mind. She expresses a preference for liking the muscular men that work for her in the Imperial Liberation Front. She is seen as a woman with confidence, cunning in battle performance, and can be as sly as a fox. She can be quite patronizing, calling the youths of Class VII, ‘My Little Darlings’ as a cute nickname and tease them. Nevertheless, she carries out her terrorist work seriously, to cover her grief for those she lost and cared for.

Scarlet grew up in one of the most pious families in mid-western Erebonia. Her family owned a large farm, making them relatively wealthy. They were also popular with both their workers and the local community.

At a young age, she was invited to follow training under the Congregation for the Sacraments (Gralsritter) at the High Seat of the Septian Church in Arteria. What she lacked in natural talent, she made up for with diligence and ultimately became a squire. There she learnt how to wield a Templar sword.

Before her first mission as a squire, Scarlet learned that her parents' farm had been taken by Chancellor Osborne, who had intended to construct a railway through it. Although her parents were given a large sum of mira as compensation, they could not find suitable land to continue their operations. Her father became an alcoholic and died in an accident. The rest of her family drifted apart, and Scarlet does not even know if they are still alive or where they are. In despair, she left the Church.

She soon met Crow Armbrust and discovered he shared her disgust for Osborne, eventually joining the Imperial Liberation Front as "Comrade S".

Scarlet makes her debut appearance as a member of the Imperial Liberation Front in the Heimdallr catacombs alongside Vulcan, Gideon and "C". She would later be seen carrying out several terrorist operations including the attack on Garrelia Fortress to seize control over the pair of railway cannons pointed at Crossbell. The plan was to assassinate Osborne during his attendance at the West Zemuria Trade Conference. Despite managing to fire the dummy rounds, they were ultimately unsuccessful at firing the cannons and retreated.

During the start of the October War, Scarlet accompanied a member of the ILF in their Drakkhen units, tasked to suppress Trista and Thors Military Academy. On the way, they encountered Class VII. Confident that they would win with their unstoppable Soldats, the ILF member attempted to take them down, but was defeated. This prompted Scarlet to intervene, who fought Rean's Valimar. The Divine Knight easily overpowered her Soldat, before Crow arrived with his own Divine Knight, Ordine.

As the war waged on, Scarlet learned that Vulcan had died defending the Schwarz Drache Barrier. As Crow had already assassinated Osborne and Michael had died during the attack on the West Zemuria Trade Conference, Scarlet simply looked for a place to die and meet with her comrades in the afterlife. She was given a chance when Class VII attacked Aurochs Fort to apprehend Helmut Albarea for razing Celdic.

Scarlet confronted Rean on a Kestrel unit, immediately expressing her desire to die and take Class VII with her. Despite her Kestrel's high speed, Valimar was able to hold off the Panzer Soldat. However, Scarlet's excessive use of the Kestrel's speed caused its orbal engine to overheat. Rean, wishing not to repeat his mistake after witnessing Vulcan's death, stopped Scarlet's suicidal attempt by cleaving the Kestrel into half, while safely extracting her from the cockpit. Denied the chance to die, Scarlet remarked on how Rean was too soft before passing out.

She was put into custody and put into the care of the staff at the Albarea mansion. When Class VII came by to visit her, Scarlet explained why she loathed Osborne, and admitted that they would be the only ones who could stop the war.

Despite her crimes as an ILF terrorist, Jusis was able to put her into protective custody. During this time, she also learned that Osborne had survived Crow's assassination attempt and that Crow had died, but was able to move on due to her encounters with Class VII. When she fully recovered, she decided to return to the Septian Church and was readmitted due to her former status as a squire. Upon readmission, she soon found herself working for Wazy Hemisphere, the ninth Dominion. She appreciated her new company, as Wazy and his other subordinates ensured that her work would not be boring.

Scarlet was eventually contacted by George Nome, who wanted to help Crow reach out to his former ILF members. She was surprised to learn of his circumstances, but promised to continue on for Michael and Vulcan's sake.[1]

Scarlet initially is attending Wazy in his business in Crossbell, but is forced to give him and his other assistant Wald Wales a scolding when she discovers the two had been brawling in the streets.

Scarlet is present when the operation to oust the Supreme Leader and the Black Guard from Crossbell City. She knocks some of the guard out whilst the crowd is distracted by the sudden performance of the Arc en Ciel on the display screens.

Scarlet participates in the battle against Reverse Babel, taking command of the ninth Merkabah in Wazy's stead. 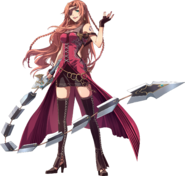 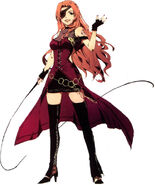 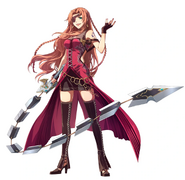 In Trails into Reverie