Septium veins (七耀脈), also known as earth veins (地脈), as spirit veins () among the Hexen Clan in Erebonia, and as dragon veins (龍脈) by East Zemurians and native Calvardians, are veins of septium ore that run deep beneath the surface of Zemuria. The energy flowing along them slowly moves the surface.

Septium veins have played an important role throughout the history of Zemuria. Since antiquity, the septium veins have been used as alignments of places of significance in the geography or culture of an area, often including man-made structures. They are comparable to ley lines .

One of the oldest structures built on septium veins is the Stone Circle in Zeiss, Liberl. The circle of stone pillars has been erected before the rise of the ancient Zemurian civilisation during the era before the Septian Calendar. It is believed to have been an important structure to a religion in those times.[1]

Around the Great Collapse, the Aureole-centred faction built their facilities on top of the septium veins in order to seal the Sept-Terrion of Space away. They found that the septium veins gathered most efficiently on the eastern side of Lake Valleria. There they built the facility now known as Sealed Area and later the Grancel Castle once they moved from the floating city Liber Ark to the land below, Liberl.[2]

Septium veins have also played an important role in the history of Crossbell. The alchemists used the septium veins to manipulate and power the alchemy circle underneath Crossbell City to realise their Azure-Zero Project. The D∴G Cult, which was originally founded by the alchemists, considered Crossbell as their Holy Land.

One of their reasons for that is because Pleroma Grass, the legendary plant that grows directly above septium veins and serves as the main ingredient for Gnosis, grows in abundance on the marshes south of Lake Elm.[3]

The Spirit Shrines in Erebonia have also been built on top of them, allowing high-purity crystals of Zemurian Ore to be formed within them over a long period of time. Divine Knights have the ability to use the septium veins to travel. This technique, called Spirit Path (精霊の道), can only be used between areas where animism had a hold (Ymir, Lunaria Nature Park, Legram and Nord Highlands) and consumes mana from the Divine Knight.[4]

Similar to Liberl, the peoples of the east are said to have built their greatest cities on places where septium veins converge since time immemorial.[1] 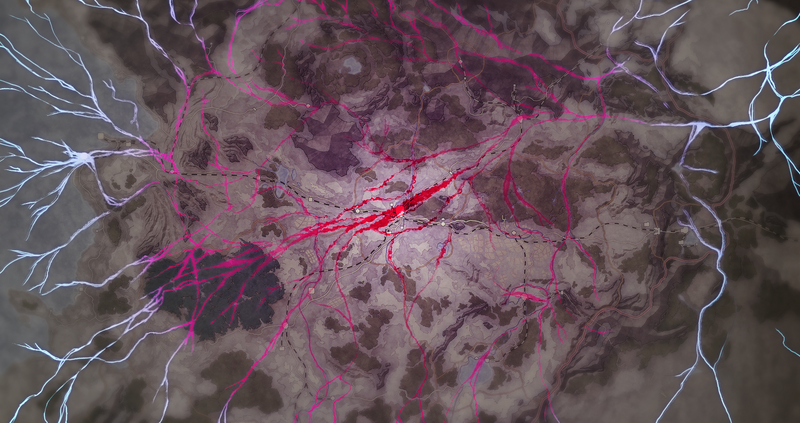 A map of Erebonia's Ley lines.

For Ouroboros's Gospel Plan in S.1202-3, Enforcer Walter was responsible for a test with a device that allowed him to manipulate the septium veins. If a Gospel was inserted in the device, it would stimulate the flow within the septium veins and enhance the natural, albeit minor tremors caused by energy flowing through the veins.