In her original appearance, Shirley is a young woman with bright blue eyes and striking red hair, a trait the Orlando bloodline usually shares. Most of her hair is kept quite short but for a single lengthy braid trailing behind her. Shirley sports several tribal tattoos around her torso and shoulder, easily visible beneath her preference for revealing outfits: in this a case crimson short shorts, a white bandeau (both held up with suspenders) and matching crimson heeled boots. Shirley wears crimson mismatched gloves, one short and fingerless and the other a full length up to her shoulder.

As an enforcer, Shirley has let her hair grow out, no longer keeping it in a braid. replacing her old outfit, Shirley now boasts thigh high boots, shorts and toned midriff-revealing top, all made of black leather. Her gloves remain mismatched but are now a violet, velvet material. She now has a sleeveless, fur lined coat, also in black with a high collar. When assisting Cedric Reise Arnor at Thors Military Academy, she wears the standard female version of the improved uniform, albeit with black thigh high boots.

In combat, she wields a chainsaw-flamethrower-rifle hybrid weapon named Testa-Rossa. This terrifying weapon allows her to land blows with flaming attacks and strike from any distance. It takes its name from the Erebonian demon of legend that wields a thousand weapons. When not in use, she keeps the weapon in a large steel suitcase, hauled over her shoulder.

Shirley is sadistic and energetic, taking great joy in the violence of combat, and is unrelentingly enthusiastic about harming her opponents. She is not above killing them, as shown when she massacres several members of the Crossbell Guardian Force, nor is she above harming non-combatants as shown when she launches an assault on the Derfflinger train in the Saint-Arkh region or mercilessly guns down defeated members of the Imperial Liberation Front. Like Angelica Rogner, Shirley is an open and aggressive lesbian, gleefully groping Elie MacDowell during her introduction (calling it "skinship"), and later doing the same to Duvalie. Both times, she uses an ability to nearly teleport behind her target in the blink of an eye (she doesn't seem able to do this for other purposes). She stated an intent to grope Estelle Bright aboard the Pantagruel, but never got the chance.

Despite her activities, Shirley is not entirely irredeemable and indifferent to certain moral standards. Although she admits that she wanted to smoke and drink, she refrains from doing so per her father's request as she is underage. She also showed some level of unhappiness in response to the destruction of the Courageous, helped the SSS find a lost cat (even resorting to torturing an uncooperative suspect during said investigation), and paid respects to Loewe at Hamel. Most notably, she finds herself concerned for Cedric Reise Arnor (despite admitting that he "isn't her type"), acting as his mentor and considering him to be her "little brother".

Despite her youthfulness, Shirley's lifelong training at the hands of her father Sigmund in the Red Constellation have enabled her to become one of the most powerful jaegers on the continent.

Unlike her cousin Randy, Shirley has always embraced the jaeger lifestyle and never had an experience that made her question it. She quickly gained a reputation for her skills and ruthlessness, earning her the nickname 'Bloody'. During her time as a jaeger, Shirley developed a rivalry with Fie Claussell of Zephyr. Just like Shirley, Fie was raised in the jaeger lifestyle as a child. This rivalry resurfaced after Fie left Thors Military Academy to become a Bracer. Shirley also developed a rivalry with former Northern Jaegers member Sara Valestein during this time.

Shirley, Gareth and Sigmund are contracted by Dieter Crois to create trouble in Crossbell (to further Dieter's agenda of ultimately keeping Crossbell independent). The Orlandos are also searching for Randy - due to the death of Randy's father Baldur Orlando (the previous leader of Red Constellation), Randy is now next in line to be the leader. Randy refuses, staying with the SSS, and faces Shirley in combat after she massacres several members of the Crossbell Guardian Force. Shirley also develops a rivalry with Rixia Mao after she launches an assault during an Arc en Ciel play which critically injures Ilya Platiere. She fights the party in a territory at Orchis Tower, her primary rival during the fight not being Randy, but Rixia. She escapes afterwards.

Following the conclusion of the Azure-Zero Project, she and Mariabell Crois are brought to the Celestial Globe, where they formally become members of Ouroboros. Shirley became Enforcer No. XVII, (although keeping her position as a regimental commander of the Red Constellation) and Mariabell became the new Third Anguis.

A year and a half after the Erebonian Civil War, Shirley was dispatched under Mariabell Crois's orders to recover the Phantasmal Blaze Plan from Chancellor Osbourne. To her, the mission was just another excitement in the premonition of another war and battle between kin.

She helps carry out the first Aion experiment in the Saint-Arkh region alongside Duvalie. She, Duvalie and a force of Archaisms launch an attack on the Derfflinger, during which time Shirley crosses paths with Fie again. Later, she and Duvalie are confronted by Rean Schwarzer and his team at Hamel, near the graveyard of Loewe. Shirley remarks that she heard that he was "crazy strong". Out of respect for the deceased former Enforcer, all of them pay respects to him before moving away from the grave to have their battle.

After they battle and Rean fights the Aion, the other members of Duvalie's Stahlritter appear, as do Gareth and Zephyr members Rutger Claussell, Xeno and Leonidas who seem to be working with them. Shirley asked Rutger how he survived as she saw him and Baldur kill each other firsthand, but Rutger declined to elaborate and they all left the area.

Later, Shirley helps fight off the members of Thors Branch Campus in the Ordis region. She spars with her cousin Randy, and Agate Crosner.

At the end of the game, Shirley, along with Rutger (ironically now working with her despite the historic rivalry between the Zephyr/Red Constellation corps), Azure Siegfried and Sharon Kreuger, serve as the second roadblock in the Gral of Erebos. Here, she is able to battle both Fie and Sara once again. When George detonated the explosives on the Courageous, Shirley was left questioning the order, believing it to be unjust.

During this game, Shirley dons the uniform of Class I at Thors Military Academy, as she is now fighting alongside them and its leader, Cedric Reise Arnor, who has chosen to work in service to Giliath Osborne.

Shirley fights alongside the rest of Class I (Cedric, Fritz and Ada) in the Osgiliath Basin when New Class VII reunites with Musse Egret. She later fights alongside Mariabell Crois and Campanella aboard the Pantagruel. Shirley can appear in a number of bonding events in this game, such as when she pays respects to Captain Valestein (Sara's adopted father), and the departed Rutger Claussell.

Shirley is faced a final time as the second roadblock in the Tuatha De Danann, alongside Cedric. Cedric appears to have a breakdown before the fight, prompting Shirley to convince him to see it to the very end. After she spars with Class VII to set the stage for the Fourth Rivalry, Shirley appears to step aside as the Rivalry begins. Cedric loses the Rivalry, and with it his Divine Knight. He faints due to exhaustion, but Shirley is still up and states that she believe she could defeat the party if she really tried. Rean surmises that Shirley has been holding back even since the Gral, because she wanted to look after Cedric. Shirley explains that she felt a connection to him, likening him to a "little brother", before she chooses to pass out rather than continue fighting, allowing the party further entry into the fortress.

After the death of Giliath Osborne, Cedric spoke with Shirley at the outskirts of the fortress. Cedric announced his desire to join the Society. Shirley asked him if he was certain, but was persuaded by his determination. She offered to guide him through the Society and would introduce him to her father as they left.

As expected, Shirley introduced Cedric to the Society as an Enforcer candidate. Despite Cedric having the necessary darkness to do so, he was still conflicted about his role as the Crown Prince. Shirley's initial attempts to train Cedric failed, as he ended up lagging behind due to said conflict.

Eventually, Shirley forced Cedric into a session against both Ouroboros' jaegers and her own by having Gareth threatening to kill him should he hesitate. During this forced session, Cedric realized that his pride was pulling him down and he subsequently abandoned it, fighting better without no regrets. Shirley watched as Cedric defeated Gareth and Gilbert. Gilbert refused to accept the loss and continued fighting. Gareth tried to intervene, but Shirley ordered him to stand down, wishing to see Cedric's potential. To her delight, Cedric defeated Gilbert a second time. 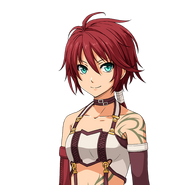 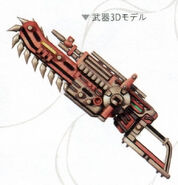 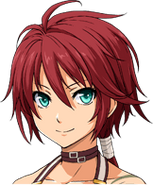 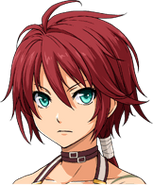 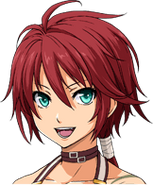 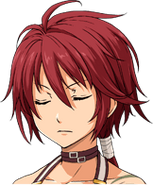 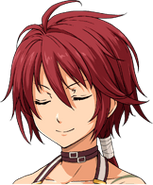 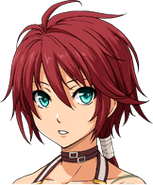 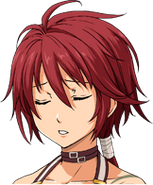 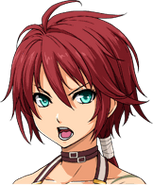 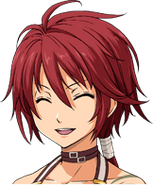 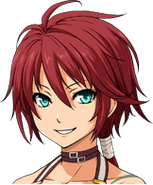 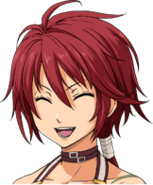 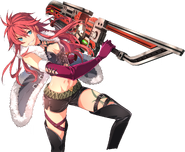 Shirley and Duvalie at Hamel 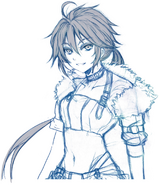 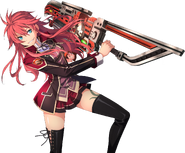 Cedric Reise Arnor joining Ouroboros with the help of Shirley 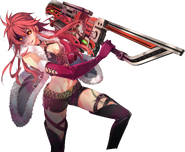 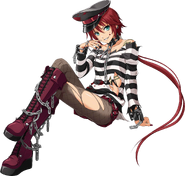 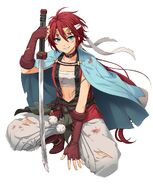