She is a silver-haired woman with pale blue eyes in her early twenties wielding an ebon odachi decorated with red and silver designs. She wears a combat suit that appears to be a mix of traditional Eastern styles and cutting edge technology. It features a long-sleeved white jacket over a sleeveless eastern style top and black leggings which openings at the thigh. A floral petal symbol is emblazoned on her top.

Despite her appearance, it was noted her eyes suggested a contrasting darker side. She initially seems playful and interested in her opponents, but also uses derogatory and mocking language to send unwanted visitors away from the Ikaruga's domain. Shizuna is extremely whimsical and acts towards whatever fulfils her interests. She will not back down from a challenge, but at the same time is open and friendly when someone garners her attention.

Shizuna was a secret disciple of Yun Ka-fai of the Eight Leaves One Blade and utilised the Zeroth Form, Twin Shadows (の型・) as part of the Black-God Lone blade Style. Despite her youth, Rean Schwarzer noted that she was on the level of a Divine Blade. Her title is later revealed to be the Divine Blade of Silver.

Shizuna is a vice-commander of the SSS-level Jaeger corps Ikaruga. They have been active in the Iska region in the east of the continent, where their skills are held high in regard. Shizuna's skills in particular are deemed 'unnatural' by Bergard Zeman. The exact cause of The Ikaruga's movements to Calvard and the Ishgal Mountains are unknown, but they share an employer with the Marduk Company which is implied to be the Calvardian Government.

In January S.1208, Rean heads to the mountains near Longlai, Calvard to search for his master, Yun Ka-fai. Here, he crossed paths with four Ikaruga members, including two scouts, Kurogane and Hime. They stated that their "contract" were to have them observe anyone who came by the area, unless they were a "person of special interest".

After Rean bested the two scouts, Kurogane engaged him. Before Rean could unleash a counterattack on him, Hime suddenly appeared and effortlessly snapped Rean's tachi in two, before allowing him to depart, informing him that he wouldn't find his master here.

Hime appears to be interested in Rean, considering him to be a "cute little brother" and her older seniors to be dull. Rean believes that Hime may have had a traumatic childhood full of bloodshed, as he noted that while she was beautiful, her eyes and odachi suggested otherwise.

Shizuna and the Ikaruga corps become active in the area around Longlai. Shizuna practises her skills and techniques whilst musing on their biggest ever contract and the new technique she developed after seeing Rean's Spirit Unification. She notices the presence of Eisen Schild and Geraint and they engage in combat. Later, Shizuna takes custody of the wayward Mare who had taken over Yumé's body and had fled into the mountains. Shizuna easily overcomes the tricks employed by Mare but the rest of the party, including Judith Ranster catch up and request her return. Shizuna initiates a fight, but after the first round, Judith calls out how unnecessary the ordeal is and she tones her aggression down, only for Arioch to appear. All parties withdraw from the area afterwards.

Shizuna and Ikaruga are amongst the forces deployed in Oración that are ensnared into Almata's death game. They make their base of operations upon a river boat. Should Van choose to align with the Ikaruga, Shizuna doesn't even hesitate to accept the offer of joining forces, although Kurogane insists on testing the party's worth beforehand. Both Shizuna and Kurogane will assist the party following this.

Should Van align with any other faction, Shizuna and Kurogane will be fought as opponents in the waterways beneath the city. After the fight, Shizuna activates Spirit Unification and a high level of power, only for her to detect the presence of the Heiyue Lai family concealed unit and force them to retreat. Feeling bored with events after this, Shizuna withdraws. She will later be found discussing her contract with Kasim Al-Fayed in the city.

Shizuna and Kurogane come to the capital, Edith on Revolution Day. Shizuna spends her time in the Darklight District's combat pits and joins Walter Kron, Lucrezia Isselee and Zin Vathek in a brawl where they cannot decide on sides. As Van prepares to go fro a drive, Shizuna knocks on his window asking for a lift and a tour and Van reluctantly accepts. They tour the city and Shizuna has a great time sightseeing and eating ice cream. She is with Van when Melchior contacts everyone and summons Pandemonium. They asses the situation and team up to face the fiends and Diabolos cubes. When Van encounters more allies, Shizuna departs to get a hold of the situation, but may return to help break the Diabolos pillars and allow Van's party to breach Genesis Tower.

Visual from Episode: "Beyond the Reverie, And the Sword Maiden Moves On" 創まりの先へ, そして、乙女は剣を手に進み続ける 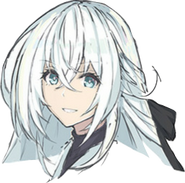 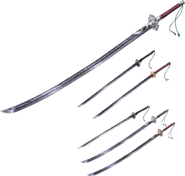 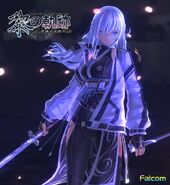