“Thors Military Academy, Class VII... Show me just what you can do”
— Azure Siegfried, Trails of Cold Steel III

Despite his original personality, Siegfried is dismissive of what the others think they know, stating his only allegiance is to his employers and that he only cares about his mission.

Siegfried appears at a distance on the top of the Stargazer's Tower. He is operating for a faction separate from the Imperial Army, the jaeger corps or Ouroboros. He appears in different locations across Erebonia to observe the actions of the Thors Branch Campus. He is accompanied by a mysterious orb that provides him with instructions as it floats mid-air besides him, wielding technologies not associated with the known manufacturers. He strongly resembles the deceased Crow Armbrust and can summon the Azure Knight, Ordine, which is later confirmed to be missing from where it was being kept in Garrelia Fortress.

Siegfried is encountered watching the party in the Sol Shrine, and then again outside the Juno Naval Fortress with Zephyr and Nidhoggr. They don't attack on the premise of Class VII stating they can handle it, but only after a 'leader' figure like Aurelia Le Guin joins with them. Siegfried has a one-to one showdown with Rean Schwarzer in the catacombs of Heimdallr after they put Zoro-Agruga to rest, but leaves afterwards in Ordine. During the climax Finale: "For Whom the Bell Tolls", Siegfried's masks breaks and reveals the face of Crow Armbrust. He immediately regains his memories and jumps down the Gral of Erebos to join the other Awakeners.

Siegfried was first teased alongside Rean Schwarzer in the artwork "Afterglow", as briefly seen in the Tokyo Xanadu eX+ commercial.[1] It remained unclear whether the depicted youth with his back turned toward Rean was Crow Armbrust, repeating the Rean/Crow rivalry from Trails of Cold Steel II's artwork, or whether it was a reflection of Rean during Spirit Unification.

In March 2017, directory diving of Trails of Cold Steel III's website revealed a leak of several still unannounced characters for the game.[2] Among them was a trio of characters referred to as "Those manoeuvering in secret". This group consisted of Siegfried, Black Alberich and Red Roselia. With Red Roselia alluding to the eponymous heroine of Red Moon Rose and Siegfried's written with the same Japanese characters as Crow's alias Chevalier, fans believed that Crow might be resurrected as Siegfried.

In May 2017, Trails of Cold Steel III Confidential Material Book ~Erebonian Empire 1206~ featured golden twin guns. The pattern on these twin guns matched the designs on Crow's twin guns as a Class VII member. Further analysis by fans[3] lead to the conclusion that the shape of the guns fit with the weapon held by the figure behind Rean in the artwork.

After teasing his reveal on August 7,[4] Falcom finally revealed Siegfried on August 10, exactly one year after he was first teased in the Tokyo Xanadu eX+ commercial. 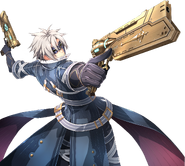 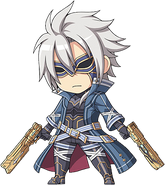 Weapon variations
Add a photo to this gallery

Retrieved from "https://kiseki.fandom.com/wiki/Siegfried?oldid=65031"
Community content is available under CC-BY-SA unless otherwise noted.