Kiseki Wiki
Register
Don't have an account?
Sign In
Advertisement
in: Characters, Trails to Azure Characters, Akatsuki no Kiseki Characters,
and 3 more

Sigmund is a tall imposing man with huge muscles, blazing red hair which reaches his waist and a full beard. He has an eyepatch over his right eye. Sigmund wears a form-fitting black shirt with white vein-like lines that accentuate his muscles, along with cream trousers, red skeletal armour boots and a fur lined sleeveless jacket. He uses two massive saw axes in combat, which can be thrown like boomerangs.

Sigmund is a brutal individual. He is someone who loves battle and is merciless in his duty as a jaeger. He also has no qualms about killing someone if his job requires it.

He has a rocky relationship with his nephew Randolph who doesn't approve of the Red Constellation's ways. Sigmund himself states that he is not fond of leading the corps, as he wishes to run wild on the battlefield. Nonetheless, because Randolph refuses to return to a life of bloodshed, Sigmund takes it upon himself to lead the corps.

Sigmund is very protective of his daughter, sending extra back up to assist her with Ouroboros's plans in Erebonia and not allowing her to drink or smoke until she becomes of age.

Since the death of their leader and his brother, Baldur Orlando, against Rutger Claussell, leader of Zephyr, in S.1203, Sigmund has been hailed as the strongest jaeger in Zemuria.[2] His raw powers have also been compared to a "human-eating tiger".[2]

Before arriving in Crossbell, Sigmund and the corps had been in the Eastern Quarter where they fought Heiyue before ultimately having to withdraw. He praises their soldiers and did not think that he would meet up again with them so soon in Crossbell.

before his true identity is revealed, Lloyd meets with Sigmund who asks him to watch a train pass. Following this he asks Lloyd how many passengers he saw on it and either praises Lloyd's insights or not depending on if the correct answer was given. It is also revealed he had torn through wanted monsters, hyping his strength up.

When the Red Constellation are revealed to have been moving into the city, having taken up the old headquarters of Revache for a branch of Crimson and Co, Randy and the SSS go to speak with him about his intentions. He mentions that these are two fold, firstly to fulfil a contract which he will keep confidential, and secondly to retrieve Randy from his 'holiday' so he can succeed Baldur as the War God and lead the corps. Randy refuses.

The Red Constellation's full might is on display when they are commissioned by Osborne to protect him from the terrorist attack the West Zemuria Trade Conference. Sigmund thinks highly of Ironblood Lechter Arundel and thinks he may be a match for Cao Lee. When the SSS chase the ILF terrorists, Sigmund and his men manage to trap and massacre a majority of them. He easily sensed a lone member hiding behind a support and ordered Shirley to kill him, but the SSS arrived before she could do so. Out of "consideration" for the SSS, he spared the remaining member, feeling that it was fine to leave one alive as his job had been done. When Randy tries to confront him over the senseless killing, he slaps him aside before leaving.

They then take up a second contract after the conference is over. The Red Constellation stage a huge attack on the city, in which Sigmund leads an assault on the Heiyue branch, where Cao is absent but Lau stands before him. Lau manages to escape but Sigmund blows up the building before moving onto the IBC. The SSS encounter him there having blown it up, and he gives them a sporting chance and time limit. Victorious, he praises their strength before withdrawing on the corps new airship, the Behemoth.

The Red Constellation are revealed to be working for Dieter Crois, and Sigmund apologizes for the trouble certain elements of the state are causing for the new regime, although he says that they wouldn't have been an issue if he had been allowed to do things his way, and presumably raze the city and wipe out all resistance. Nevertheless, he pledges to wipe out all remaining resistance. He isn't too fond of Ouroboros's efforts to recruit Shirley in front of him.

Sigmund is one of the four individuals fought in the Azure Tree's territories, where his is a blood and lava filled plane of carnage. Sigmund raises the merits of a world headed for war, and that jaegars will thrive, testing Randy and his new family. He loses the fight, which in turn allowed Randy to take the position of War God, but Randy refuses to and Sigmund allows Randy to remain with his new family as long as he shows his new strength. Sigmund is later picked up with Shirley by his jaegers, evading capture.

Despite his reservations with Ouroboros, Shirley eventually accepted the offer to join them as an Enforcer. Worried for her safety, he sent Gareth and a detachment of jaegers for her to use as she saw fit. He is later mentioned as moving abroad in an effort to support Operation Jormungandr. Arios and Rixia are responding to his actions, as are Sergei, Dudley and Noel. 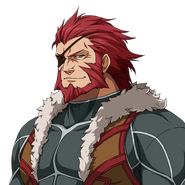 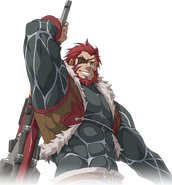 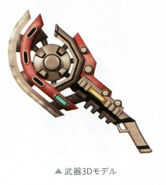