Sergei Lou
Lloyd Bannings
v · e
The Special Support Section (), abbreviated as SSS (stylized as S.S.S in the logo), is an early S.1204-established division of the Crossbell Police Department.

The department was founded by Sergei Lou and Guy Bannings in early S.1204. After Guy's death, Sergei runs as the section's chief.

Unlike other departments or bureaus, operations handled in the section consist of listening to every citizen's minor requests for assistance or monster hunts. At first, other departments of the Police Department criticize the section as imitating the Bracers due to the range of specialising anything. But it was planted as the police's last stand to regain the citizens' trust for the government's mismanagement of the spreading crime spree.

The person in charge of the SSS is co-founder Sergei Lou. Its core members consist of Lloyd Bannings, Elie MacDowell, Tio Plato, and Randy Orlando. In the second half of S.1204, Noel Seeker and Wazy Hemisphere join the group.

They made the Special Support Section Annex building their home.

The Special Support Section proved to be a worthwhile initiative. Immediately after it was founded, it deduced that two delinquent groups in the Downtown District were attacked and subsequently framed by the Imperial-backed mafia syndicate, Revache.

Other accomplishments include resolving the threatening letter sent to Arc en Ciel artist Ilya Platiere, preventing the assassination of Mayor Henry MacDowell, infiltrating and protecting KeA at the Schwarze Auction in Mishelam, investigation of the secret spread of Gnosis as a drug and putting a stop to its cause, the D∴G Cult, in their attempt to awaken KeA.

After a summer hiatus, the group re-establishes in August S.1204 with new, temporary members. They serve as security during the West Zemuria Trade Conference and deal with numerous incidents that greatly affects the composition of the SSS.

After the newly established Independent State of Crossbell declares its independence, the majority of the SSS is arrested. With help from collaborators, they manage to break out and get together again.

After they manage to thwart the Azure-Zero Project from reaching its ultimate completion, they split up once again due to the Imperial occupation in January S.1205.

In the spring of S.1207, the SSS get together once again in the liberated state of Crossbell. 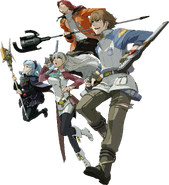 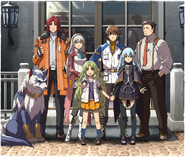