The spirit shrines were originally constructed from the period starting over 900 years ago by the Gnomes in the period of the their cooperation with the Hexen Clan following the creation of the Great One and its subsequent separation into the seven Divine Knights. Although the Gnomes were chiefly behind their constructed, at least one of the shrines was presided over by the Hexen Clan.

The shrines were constructed over particularly strong Septium veins which allowed them to affect the areas around them on a spiritual level. This included effects like supernatural mist, the manifestation of spirits, Magic Knights and Cryptids and the blooming of Pleroma Grass.

The spirit shrines are normally hidden to the normal human eye, and exist in a folded space, usually only becoming visible in times of great spiritual unrest or when the Septium veins are in disarray. The landscape around them is known to shift, allowing passages that did not previously exist to appear suddenly. Animist monuments were sometimes present in locations where Spirit Shrine were present, although it is unconfirmed as to whether they existed previously due to the concentrations of the Septium veins or were placed there afterwards. This is true of the Draco and Sol Shrines. Others, like the Stella Shrine, simply appear when passing through a linked cave which holds a folded space.

Those with a connection to the Empire's history are often granted visions in the depths of the shrines, as a result of the connected Spectral Moon Mirror which is connected to the history of the Empire and the Black Records.

The Aria Shrine is located in the far northeast of the Nord Highlands and is home to wind elemental enemies. The Aria Shrine is the second shrine that can be entered and is first encountered when part of Class VII has travelled to the northeast of the Highlands to reunite with Millium, Alisa and Gwyn. The shrine entrance is located further down the zone. The first stratum is similar to the Terra Shrine and at the end of this Rean has his second vision of Dreichels the Lionheart's past which details him deciding to take up arms with his new brothers and sisters from Nord to stop the ongoing war for succession in Erebonia.

The Aqua Shrine is located near Legram and is home to water elemental enemies. The Aqua Shrine is the third shrine that can be entered and is first encountered after the group meets up with Emma and Laura. The shrine is encountered when travelling from Legram to Bareahard from the Ebel Highway by foot. Like before the first stratum is similar to the earlier encountered shrines with an aquatic theme where systems of drainage or used to navigate through the shrine. At the end of the first stratum Rean has his third vision of Dreichels which details him meeting Lianne Sandlot the Lance Maiden for the first time and her pledge to serve in his army.

The Ignis Shrine is located near Roer and is home to fire elemental enemies. The Ignis Shrine is fourth shrine that is first found during the operation of liberating Roer as the party is on their way to the Schwarz Drache Barrier with Angelica Rogner. Unlike the other shrines the class does not enter the shrine due to time constraints instead electing to come back later when the third faction starts working towards building a Zemurian Ore Tachi for Valimar and Rean. Unlike the other shrines the first stratum either is skipped visually or simply does not exist at all with the party immediately opening the locked door to the second stratum on the way to the shrine itself.

The Terra Shrine is located near Garrelia Fortress and is home to earth elemental enemies. The Terra Shrine is first shrine that can be entered and is encountered when Rean, Toval, Fie, Machias, Elliot and Celine travelled through the Twin Dragons Bridge to Garrelia Fortress. Upon first inspection the entrance further in the shrine is locked but it is here that Rean gets his first flashback to memories of Emperor Dreichels during the War of the Lions. This flashback details Dreichels' entry to the war experiencing the pain and suffering of the commoners in this war.

The Glacia Shrine is located near Ymir. It is a special shrine that does not have any Zemurian ore inside. Instead it holds a strong Magic Knight, which upon defeat rewards the player with the strong Ice Crown accessory.

The Sol Shrine first appeared in Trails of Cold Steel III and is located on Bryonia Island. While it does not have any Zemurian Ore, it is still built on top of a notably significant cluster of Septium Veins and is stated to be one of the most ancient of its kind. The Shrine can be accessed after triggering five special Animist markers around the island, which will allow the Sol Shrine to appear. It is within this shrine that the Stahlritter and Arianrhod reside for the first half of their operations in the Lamare Province, as the site is a suitable place for the Aion Type-αII to charge mana. They capture Millium Orion here necessitating a rescue by Rean Schwarzer and the new Class VII.

In Trails of Cold Steel IV, Rean travels here to confront Crow Armbrust and Duvalie where they fight and begin the first Rivalry. Unlike the others, this does not take place in a special sanctuary phase space, possibly as the conditions were forced and it was not near enough to the time of the Great War and the prerequisite strife in the world.

The Luna Shrine first appears in Trails of Cold Steel IV, where it is situated near Lake Gala, in the vicinity of Milsante. New Class VII witnessed the memories of Dreichels on his deathbed and Lianne Sandlot at the depths of the Luna Shrine. This shrine is associated with the Moon and water, with Celine stating the link between the tides and the Moon. The barriers resemble falling water.

The Luna Shrine is the only shrine that the Hexen Clan have presided over since ancient times, with many wandering witches, Isola Millstein included, having watched over it. It contains an artefact bestowed to the Hexen Clan known as the Spectral Moon Mirror, and it is through this artifact that visions of the Empire's past are present in the other Shrines scattered across the Empire. Seeking the truth of the matter, Class VII are invited to pass a trial here to unlock the full power of the mirror and see the full truth of the Erebonian Curse. This takes place in the phase space known as the Luna Sanctuary. Vita Clotilde and Aurelia Le Guin are invited to take part in preparing the trial, and Roselia Millstein takes on her true form here due to the concentration of mana.

This is the site where Roselia took on the powers, responsibilities and some of the memories of her predecessor, and she notifies Celine Millstein that she may have to return to this location should the need for another successor arise.

The Draco Shrine is located on the Old Agria Road near Parm. New Class VII and Randy Orlando explore the first level and witness a vision of Zephyr and Black Alberich in the depths. When Rean and his party return to begin the second Rivalry against Rutger Claussell, they find the access to the sanctuary has been moved to Hamel and a large barrier is erected to prevent access. After disabling this barrier they enter the Sanctuary and Valimar is victorious against Zector, absorbing his power.

This shrine is themed after dragons and the wind, with an atmospheric green glow and several storms raging within the sanctuary. The barriers are formed of many swirling winds. Several draconic and reptilian monsters, fiend and spirits are present.

The Stella Shrine is located on the Ursula Road in Crossbell. It remains unseen until a certain threshold is crossed in a cave, triggering it to appear in a folded space. The Shrine can be explored and a memory of the Empire obtained. The Sanctuary, like the Draco Shrine, is moved to the Lake Elm wetlands during the preparations for the third Rivalry. The Sanctuary is themed after stars and fire, with flaming barriers that contain a fraction of time mana.

Arianrhod chose this Shrine due to her appreciation of the Marshlands beauty when she first arrived in Crossbell with the Stahlritter. It is here that Rean and Valimar defeat Argreion but lose out on its power due to a surprise attack from Rufus Albarea who steals it.

The Sanctus Shrine is located on the Auros Coastal Road. No Sanctuary is found here or Rivalry taking place, but it does contain the remaining essence and power of the Divine best of Earth, Argres. Following an investigation with Toval Randonneur, Rean and the party confront the Beast and obtain the Earthern Prison from its remaining power, reclaiming the beast's name in the process and laying it to rest after exhausting its remaining power.

This shrine's existence was a complete secret unknown to even Roselia. Isola Milstein discovered it and in an attempt to make the world safer for her daughter, lured an incarnation of Black Alberich there for a fight that ended in their mutual demise. It was ultimately futile, as Alberich had the ability to possess another Gnome body, however Isola was able to implant a memory of herself into the shrine and a message for Emma when the time is right.

Zeit discovered its location and guides Emma, Roselia, Vita and Celine here after they find A journal written by Isola. They explore the shrine, overcoming a trial of spirits summoned by white feathers and they find a memory of Isola in the depths, along with a spirit of her familiar, a white owl. 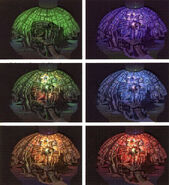 The crest placed upon spirit shrines