The Girls' School is named after the saint Astraia, who played a key role in the temporary transfer of the imperial capital to Saint-Arkh during Zoro-Agruga's reign over Heimdallr. Saint Astraia was in the possession of a mysterious ring, later identified as the artifact Ring of Relief, and used it to mend the wounds of Zoro-Agruga's victims.[1]

St. Astraia Girls' School has adopted the unicorn as its symbol. According to legends, these sacred beasts, pure white in colour with a single horn, are said to be capable of curing any illness and can only be touched by virgin maidens.

St Astraia Girl's School mainly serves as the location Rean Schwarzer and Class VII meet up with his sister, Elise Schwarzer, who happens to be the student council president. They also meet Alfin Reise Arnor, the Imperial princess and closest friend of Elise. Upon their first visit, they encounter Olivert Reise Arnor, a patron of both St Astraia and the head of the board of Thors Military Academy who greets them for the first time.

Throughout the rest of their travels through Erebonia, Rean and company would encounter students from St Astraia on numerous occasion, most frequently in the capital. There were frequent charitable events and festivals hosted by the students, including sales and performances.

After the Erebonian Civil War, admission fees had tightened due to the government's reformation towards the aristocracy, causing most noble students to drop out.

Sometime after the war, the school was involved in an incident in which Dario, the son of President Giscard, who sponsored the school, picked up students from the school for his and his lackeys entertainment. Rean and his students intervened, managing to get incriminating evidence against him, and he was subsequently banned from the school's festival and detained.

Later, the manifestation of the Gral of Erebos causes various Cryptids and Magic Knights to appear all over the capital, threatening the school. Vita Clotilde, Patrick T. Hyarms and a select few others fortify the school with a magic barrier and protect the students within.

It is revealed that at some point Elliot Craig had taken the position of music instructor at the school. Eventually, reports come out that students are suffering from mysterious fatigue and memory lapses, prompting New Class VII to return and make an investigation. Kurt ends up having to dress up as a student due to the school's female-only admission policy.

During the investigation, it is revealed that part of the Primal Ground that existed underneath the cathedral next door was connected to the school with a mysterious portal. This portal was the same one that created the Gral of Erebos, which harbored a manifestation of Yed Vanas, one of the Seventy-Seven Devils. Yed Vanas was sapping energy from students by luring them and enticing them to pick up the Ring of Relief, an artifact it had taken control over. The ring itself was once owned by the school's namesake, which had the ability to heal any wound. New Class VII exterminated Yed Vanas, collapsing the distorted space and the problem is resolved. 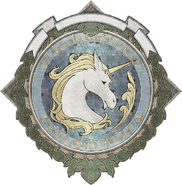 Emblem of the school Trails of Cold Steel III

Retrieved from "https://kiseki.fandom.com/wiki/St._Astraia_Girls%27_School?oldid=66887"
Community content is available under CC-BY-SA unless otherwise noted.