During the October War from October to December S.1204, although the Imperial Army of Erebonia and Noble Alliance exchanged fire outside Parm, no real large-scale battles took place in Sutherland outside the area surrounding Dreknor Fortress. Immediately after the start of the war, the Imperial Army stationed in Dreknor Fortress was attacked by the Noble Alliance's Panzer Soldats. With no opening for the Imperial Army to counterattack, they were forced to hole up until the end of the war. Sutherland accepted many refugees from the Kreuzen Province during the war.

In April S.1206, Rean Schwarzer was instructed by the Imperial government to halt Ouroboros' activities in the region. A battle between Class VII and Ouroboros unfolds near the ruins of Hamel, resulting in the destruction of Aion Type-γ.

Saint-Arkh, the Old City, is the capital of Sutherland Province. The city is known for its historical beauty. It served as the imperial capital for a century from S.270 onward until Heimdallr was reclaimed and rebuilt.

Parm, the Spinning Town, is a town in the that flourished through its wool cultivation and spinning workshops. While virtually all imperial cities and town have shifted to orbal technology, Parm's insistence on waterwheels proved to be useful during the Orbal Shutdown Phenomenon.

Eryn is a hidden village in the Isthmia Great Forest near Saint-Arkh. It is the home of the Hexen Clan. The village is ran by Roselia.

Hamel was a village located in the south of Erebonia, 120 selge near the border of Liberl. The village and its inhabitants were The attack on the village was then used as a excuse for Erebonia to invade Liberl and became the cause for the Hundred Days War.

Dreknor Fortress is a large military base. Its size is on par with the Garrelia Fortress on the eastern border with Crossbell.

Titus Gate is a military gate that serves as a checkpoint between the Sutherland Province in Erebonia and the Bose Region in Liberl.

Sutherland Province is Erebonia's southermost province, situated east of Lamarre Province, south of the Heimdallr region and west of Kreuzen Province. Flowing in from the north is the Trish River,[JP 1] which runs through the province until the mountain range surrounding Liberl's border.

Saint-Arkh, the provincial capital, is situated west of the Trish River. In the northwest of the province, taking up almost 20% of the province's land, is the Isthmia Great Forest, home of the Hexen Clan. A nameless river flows from the Balares Sea into the Great Forest. Immediately south of the forest is the Tyrrheanian Plateau.[JP 2]

East of the Trish River and situated northeast of the central Saint-Arkh is Dreknor Fortress. Southeast of the capital is Parm, which can be reached by train through the Sutherland Main Line. Just before Parm it branches off into the Titus Branch Line, leading to the gate it was named after on the southermost border of the province and empire. Heading east from Parm leads to the Agria Gorge[JP 3] and ultimately to the Arseid Viscounty. 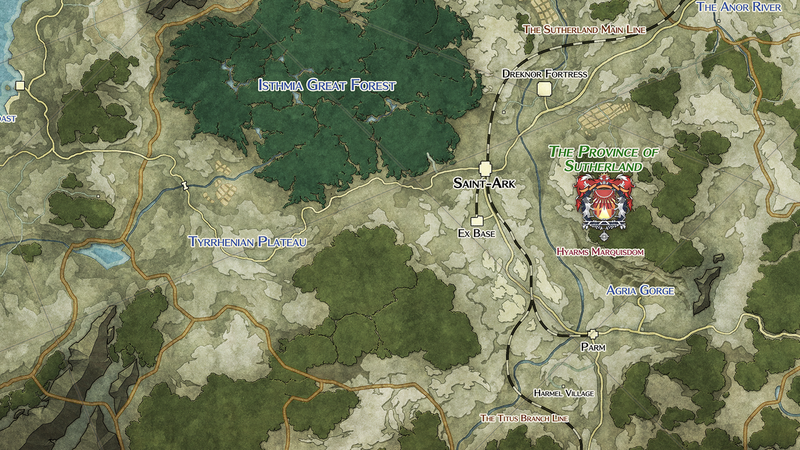