With his partner Nadia, Swin appears in Trails into Reverie as part of C's group.

Swin a boy with messy dark brown hair and orange-peach eyes. He wears a gray shirt, black trousers, dark brown boots and a blue jacket with a white hood. Across his chest and wrist are black straps with intersect and make a cross pattern. He also wears a black choker, gloves and has a belt with the numerals for '3' upon them. Swin carries a unique, Organization-made pair of blades which interconnect, and double as an orbment. The handles and plating are purple with the blade itself being gray and silver.

Swin is level-headed and thinks situations through in his head before acting. He is a capable actor, but nowhere near to the degree of his partner Nadia. he can be cold, standoffish and prone to pessimism, but will use any means to assure the safety of his partner. He has been troubled by his dark past, having nightmares about the screams and victims. Now, he is resolved never to take another life again.

In the novel, Swin is portrayed as a 13-year-old boy and the partner of Nadia. He entered the organization known as Garden at the age of 7 and graduated from Training School known as the 'Factory' at the age of 10. For the three years since his graduation, he's been working as an assassin under the alias of Three of Swords.

His previous partner was Ace, a boy one year over his age. They got along extremely well, and Swin thought of his as an older brother type figure. They shared their hatred for the organisation and planned to escape together. Fleeing to Erebonia, they did not realise the Organization had eyes there as well. They fought off two pairs of assassins sent after them but were forced to retreat when the Emperor came after them with his formidable gravity controlling abilities. Realising only one of them could survive, Ace knew Swin would want to lay down his own life, so Ace feigned a betrayal of Swin and attacked him, allowing himself to be killed for Swin could live and return to the Organization, as per their rules about killing traitors. Ace's death continues to haunt Swin. As fate would have it, Swin would next be partnered up with Ace's younger sister, unbeknownst to him.

Swin excels at swift close combat, dual wielding a longsword and shortsword that can be combined into a greatsword for greater power. The blades double as an orbment, with two intersecting lines 'marking' an opponent with a cross, and a final third blow capable of creating an instantaneous detonation.

Swin had been working as an assassin under the alias of Three of Swords alongside Nadia for about a year when they completed a mission to kill Haldor Baarn, a corrupt individual working with Heiyue. He played the part of an incompetent butler in order to gain access, losing the documents that would have been hard to forge. And disabling the ex-jaegar guards, Swin manages to destroy an Archaism deployed by Baarn by targeting its weak points with his weapon's unique ability, with guidance from Nadia. Swin then assassinates Baarn. After reporting on the mission, the Emperor questions Swin on his loyalties and whether he is planning to escape. As it happens, Swin was, but he manages to leave. Swin had booked a ticket to get to Liberl using an alias from a previous mission.

Not even twenty four hours later, Swin is re-summoned to the Emperor where apparently, Nadia has outed him, taunting him and showing him the tickets, as well as revealing herself as Ace's sister and how she has been out for his life since the beginning. Swin resigns himself to death, knowing he has no escape and lets Nadia wrap wires around his neck. Nadia instead reveals she had planted secrets wires to attack the Emperor and buries him under boulders. They flee upon witnessing his gravity powers but realise they will have no better opportunity to finish the job and otherwise he will pursue them forever.

Swin's attacks are ineffective against the Emperor, even with Swin accounting for the gravitational influence. The Emperor simply knew Swin's abilities so well that he could outmanoeuvre him. Nadia feigns a mortal wound in order to analyse him, and works out he is down to only three out of four of the Monarch's Regalia. The pair finally manage to slay the emperor after Nadia uses her wires to manipulative Swin's movements in a way the Emperor cannot predict. They then travel to Calvard and wonder about their next steps while moving around in a horse cart. During this time, they also meet Van Arkride who helps them out.

In Trails of Cold Steel IV, a novel about their activities is published, which Nadia later states is the Organization's way of putting out a wanted poster.

Swin and Nadia began a tour of contracted hired help, working (with a 'no assassination requests' condition) and traveling around West Zemuria. They begin by hiding the three parts of the Monarch's Regalia in different locations. Swin makes his debut along with Nadia in Crossbell. They first come to Crossbell in hopes of hiding the last piece of the Monarch's Regalia, and notice the book named after them doing well. Whilst in the city, they visit the Arc en Ciel theatre and witness Rixia Mao practising. Recognising her as the legendary assassin, Yin, Nadia's instincts kick in and she thinks of Rixia as a target to be eliminated. Swin restrains her but Yin detects the killing intent. Leaving the city, Rixia and the pair confront each other, but it soon turns out to be a misunderstanding- Yin thought the Organization (which hates Yin for an unknown reason) was after her, and Nadia and Swin thought The Organization had sent Yin after them. They part ways on amicable terms.

Around S. 1207 February 14, through a certain job giver, Swin and Nadia were contracted by Joerg Rosenberg to deliver a black trunk (containing Lapis Rosenberg) from the Temple of the Moon to a specific location near Crossbell and make sure a man by the alias C retrieves it. The contract also had them make sure C would check to contents of the trunk case in front of them to ensure the request's completion. One month later, around the night of S. 1207 March 16, Swin and Nadia managed to complete the request while being repeatedly hunted by the Supreme Leader (fake) Rufus' Black Guards to steal the chest. Upon discovering Lapis, C applied a advanced paid contract job to Swin and Nadia (an unknown amount to ensure a middle economic family a lifetime of no work as an advanced payment) to work for him and protect Lapis. While Nadia was happy with the advanced check, Swin established the contract to have a condition of no assassination requests during the contract job's tenure.

While in Crossbell, Swin encounters the Fisherman's Guild who give him a rod. Swin accepts as he sees fishing as a good way to gather information and blend in. The group travel to Heimdallr where they work to reveal surreptitious elements of the Erebonian Army. They are pursued by Rean's group into the catacombs. In the Himmel Cemetery, Swin helps fend off Crow Armbrust and Rean's party who have caught up, but after C's mask is smashed, revealing his identity, they flee onboard a Neinvalli airship.

The group's next destination is the Doll Studio to recover Lapis' memories. Whilst there, the group is Split up and Swin and Nadia encounter what appears to be the Emperor, seemingly alive and now with all four of the monarch's regalia, even after they had hidden three of them. This new Emperor is no longer interested in killing them, seeing them as the perfect tools and wanting to bring them back to the Organization. Swin is able to adjust to the gravitational effect after a while and comments it isn't as strong as it was before. After fighting for a while, Nadia deduces small differences and weaker strength than the original and works out that he is a fake. F. Novartis confirms this and Swin and Nadia are able to overcome the effect and destroy the Simulacrum.

At the Knox prison, they discover Lapis' true nature. The revelation is interrupted by the appearance of a monstrous form of the Emperor, who has been fully taken over by the orb artefact and is now obsessed with tracking the pair down. With help from Zeit, The group cut off the arm containing the orb and Swin and Nadia pierce it together, destroying the artefact and ending the threat once and for all.

Swin and Nadia take part in the operation to retake Crossbell City, and the subsequent infiltration party used to assault Reverse Babel. Swin and Nadia are separated during the final assault but reconvene towards the center. After the battle, they wait by C's beside join him on his travels through Calvard after his recovery. 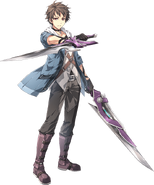 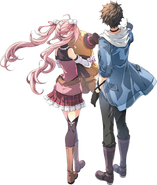 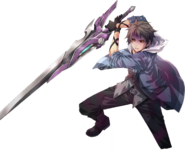 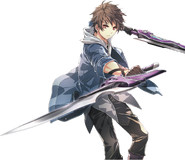 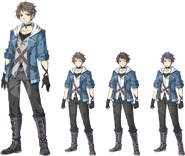 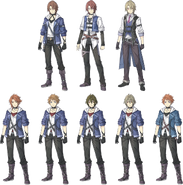 Promotional screenshot of Swin with Jingo and Lapis Rosenberg

Promotional screenshot of Swin with C and Nadia Rayne 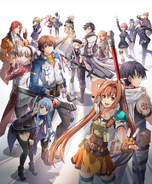 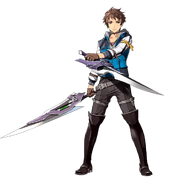 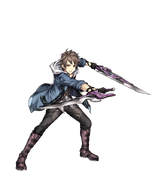