Female
v · e
Theresia Caroline (テレジア・カロライン) is introduced as a student of Thors Military Academy's Class II ('03-'05) and the daughter of Baron Caroline.

Theresia is a young woman with blonde hair and blue eyes. During her time as a Student of Thors Military Academy, she wore the female noble uniform consisting of a white and purple blazer with a gold trim, white shirt, purple tie, purple skirt and black tights. She wore her hair long and in a high pony tail.

After graduation, Theresia wears the uniform of the Imperial Army of Erebonia, a purple and black uniform with a skirt and black tights, along with a brown fleece-lined bomber jacket and pillbox hat. She wears white gloves, black boots and uses an orbal pistol in combat. Theresia has now cut her hair to a bob cut, losing the pony tail.

Theresia is the calmer and more temperate of the pair, and often has to calm her friend down. She prioritizes safety and looking after people. She claims to have low blood pressure which makes mornings a struggle. She is a sporty individual, and opted for Thors over St. Astraia Girls' School due to the wide offer of sports clubs.

Theresia and Emily are almost always seen together, and more often than not, this is on the playing field for lacrosse. Theresia is the vice-captain. Even though they differ in their social backgrounds, they get along strongly, although they argued heavily in their first year. She muses Ferris and Alisa reflect this and history seems to be repeating. Theresia's family live in the Kreuzen province, so she muses that she will probably get evacuated should war break out.

During the October War, Theresia flees the academy. She and her father are firmly opposed to the war, but Emily feels she can't just storm off, disobey her father and join the Courageous until Emily is there. She is very moody and her father tries to placate her by taking her to restaurants. She eventually stands up to her father, defending Emily and winning her position. Emily and Theresa run the ranged training room practice.

After graduation, Theresia started working as 2nd Lieutenant with the 3rd Air Fleet of the Imperial Army. She and Emily are stationed on a scientific research vessel that is producing a protective barrier around the Draco Shrine, preventing Rean from accessing it for the Rivalries. She and Emily face Class VII when they board, stating it is their duty as part of the air force, but are defeated.

Feeling uncomfortable with the direction of the war, They are re-stationed to the Independent Rogue Faction - a special force that is allowed to use its own judgement to defer criminal organizations that might infiltrate the Empire, by a sympathetic Vandyck. they use this opportunity to reunite with the others in Mishelam before the start of the Great War. She is asked to participate in the drinking contest, Edel represent her instead.

Emily and Theresa are invited to play tennis in the run up to Class VI's reunion. Despite never having played before, they transfer some of the skills they learned from lacrosse and turn out to be pretty good. Rean's party later meet up with them in Heimdallr where they have a home. They have been transferred to the Joint Staff Office by Vandyck. They cannot share any information yet due to military confidentiality, but are concerned for the events in Crossbell.

When Reverse Babel is revealed and fires Keraunos for the first time, Theresia signals to Vandyck onboard one of the Air force ships about a disturbance in Crossbell. They witness the beam travel past and obliterate the Juno Naval Fortress.

Theresia as a student 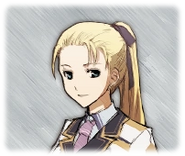