v · e
Thomas Lysander (トマス・ライサンダー), also known as the Partitioner (匣使い), is a knight of the Gralsritter, occupying the seat of Second Dominion as the right hand of Ein Selnate and a teacher of history and literature at Thors Military Academy.

As an instructor, Thomas wears a green and gold waistcoat, red neck scarf and tartan breeches. His most distinct feature is his large, circular thick lensed glasses which hide his eyes from sight. When in disguise or travelling, Thomas adopts a brown hooded coat.

As a dominion, Thomas wears a variation of the standard Gralsritter coat using the brown and black colour scheme over a black shirt and tie. He replaces the old glasses with a smaller circular version. He also wears white gloves and carries around a Gralsritter pendant.

Thomas's first appears as an epitome of carefree of all things around him, students and staff members alike. As a history instructor, he's very knowledgeable in folklore and legends between reading in the library while presenting his lectures.

His optimistic attitude and easygoing personality does seem to get on some folks nerves, such as stating Sara and Neidhardt's issues without pausing the consider the context. Nevertheless, he is a skilled fighter, deploying an Orbal Staff effectively on the battlefield to the surprise of his colleagues. After his true character was revealed in Trials of Cold Steel II, Thomas shifts between his old, goofy personality and his true sterner and serious demeanor.

Thomas Lysander is introduced as a jolly teacher, passionate about literature and history.

In Trails of Cold Steel II, he secretly aids Rean Schwarzer and his companions as they make their way throughout Erebonia, reuniting with lost friends and gathering strength. He appears in disguise and speaks using his normal voice, then shocks everyone when he reveals himself in Celdic, declaring "Tada! Tis I, Thomas, your favorite instructor!"

During a NG+ exclusive quest in II, he asks Rean to find the Black Records. Upon having Thomas decipher these, they discover the records contain the unabridged version of the War of the Lions.

Completing this quest unlocks a special scene on the rooftop of Thors Military Academy, where Thomas creates a so-called "partition", which creates a room separated of the actual time-space continuum, to have a talk with Rean and Rosine. There he reveals his identity as the Second Dominion of the Gralsritter and re-introduces Rosine as his squire. Because Rean is the Awakener of Valimar, a fragment of the Great Power, Thomas asks Rean for his cooperation.

After the partition resolves and Rean leaves the rooftop with Class VII, Thomas comments to Rosine that Rean's assistance is needed in uncovering Erebonia's two Sept-Terrion and the secrets of the Divine Knights system fashioned by the Hexen Clan and Gnomes. He also reveals that he and Rosine are in charge of eastern Erebonia while Barkhorn takes care of western Erebonia.

When Gaius Worzel returned to Nord with Barkhorn, the village was attacked by a Republic airship. Barkhorn died protecting Gaius and imparted his Stigma to him. Thomas then took Gaius to Arteria so he could begin his training as the Eighth Dominion. As Gaius lacked a crew to pilot his inherited Merkabah, Thomas loaned his squires for the time being.

Meanwhile, Thomas roamed the Empire searching for information, establishing contact with Roselia and Vita Clotilde. Together with the witches, Thomas reintroduces himself to Class VII in the Heimdallr Cathedral and briefs them on the situation. He would later join in on the attack against the Gral of Erebos, using his partitions in conjunction with Rose's magic to open a pathway into the facility.

When the Great Twilight began, Thomas requested for assistance to deal with the deteriorating situation in Erebonia. He had intended to bring Kevin Graham and Wazy Hemisphere, the Fifth and Ninth Dominions respectively, but neither of them were able to help as they were dealing with other situations. Thomas provided assistance transporting one of the teams into the fake salt pillars as part of the Radiant Wings' countermeasures against the war.

Thomas, as well as four other dominion, arrives in the climatic battle against Reverse Babel with a fleet of Merkabah, using their power to produce barriers that shielded the other participants from the tower's lasers. He would later use his partitions once again to help the party infiltrate the tower as well as summon their Soldat units.

A Hollow version of Thomas appears in the True Reverie Corridor, impeding the party's progress at the end of one of the levels. It supports a hollow version of both Wazy and Gaius, using partitions before finally being vanquished.

Thomas does not appear in person, but is mentioned as being in charge of clean-up operations in Oración following Almata's death game and the subsequent efforts to retrieve missing artefacts. He is present at the gathering of Dominion in the New Year in Arteria. 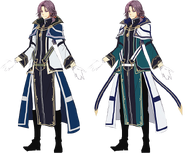 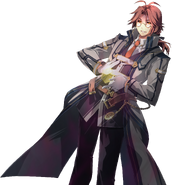