The Branch Campus was established by Imperial Prince Olivert Reise Arnor after the Erebonian Civil War. It is intended for foreigners, including students heralding from merged provinces Crossbell and North Ambria, and students who did not perform well in other schools. The school houses 20 students in total; 3 in Class VII, 8 in Class VIII and 9 in Class IX.

At the school's welcoming ceremony, Principal Le Guin declares the school a "trash bin," noting that both its faculty and students are those that have been deemed to be too troublesome or with backgrounds too problematic for the main campus, which is welcoming Crown Prince Cedric Reise Arnor. Despite this, she expresses the desire that the students will embody the ideals of Thors and warns that any who lack the resolve to reforge themselves in the fires of adversity should leave.

The students are quickly challenged by both the school's rigorous curriculum and their field exercises, in which they unexpectedly find themselves contending against the various forces of Ouroboros. Additionally, a rivalry quickly develops between Class VII and Class I of the Main Campus, spurred by a visit from Prince Cedric. Cedric expresses disdain towards the Branch Campus, offering both Rean Schwarzer and Kurt Vander a chance to transfer to the Main Campus. They decline and Cedric later challenges Rean and his students to a Panzer Soldat battle along with his classmates Ada and Fritz, only to lose.

Following the exams, the students of both the Main and Branch Campuses conduct field exercises in the capital city of Heimdallr upon reports of Calvardian agents having infiltrated the city. Though the Branch Campus students have always traveled to field exercises via the train Derfflinger, they learn that the Main Campus has now also been provided their own train, the Arc Royale. Upon arrival in Heimdallr, Rean's group and Cedric's group, led by Neithardt, are split across the city. Though they continue their rivalry, working together to resolve the crisis seems to mellow relations between them. Rean's group, together with the old Class VII, defeat the ancient Dark Dragon Zoro-Agruga under the city. Once the crisis is resolved, Emperor Eugent Reise Arnor III holds a ceremony honoring their efforts, with Rean accepting on behalf of the new Class VII and Cedric accepting for Class I.

On the evening of the Summer Festival, a party is held in honor of the resolution of the crisis. During this time, the members of both the Main and Branch Campuses take the time to get to know each other even better. The party, however, comes to a shocking end when Ash Carbide of Class VII, under the influence of the Erebonian Curse, shoots Emperor Eugent in the heart using a gun of Calvardian manufacture. The shooting of the Emperor sends the Empire into chaos. Heimdallr is placed under martial law and Ash Carbide is declared a suspected Calvardian agent. His actions are used as a pretext to declare war on Heimdallr.

The field camp of the Branch Campus is placed under guard by the Imperial Defense Force. Despite this, the new Class VII escapes with the aid of Emma Millstein's magic to reunite with the old Class VII to discuss the situation at the Heimdallr Cathedral. Their discussion is interrupted by the appearance of the Gral of Erebos, prophesied by the Black Records and, with it, the appearance of cryptids and Magic Knights throughout the city. Fighting their way past, the combined Class VII rushes to the Gral, where they are shocked to discover that the Main Campus have through their support behind Chancellor Giliath Osborne's plan. They brave the Gral and in its depths discover the Holy Beast as well as Cedric supporting the Chancellor and learn the truth of the plan. Altina Orion attempts to sacrifice herself by becoming the Sword of the End, but Millium Orion does so instead. Rean then loses control of himself and using the Divine Knight Valimar and the Sword, dispatches the Holy Beast, sending the Curse rippling throughout all of Erebonia and ushering in the Great Twilight. He is then seized by Osborne, piloting the Ebon Knight Ishmelga, who declares that they will write the end to the wretched fairy tale, in ink black as despair.

Following the events at the Gral, Musse Egret, secretly the Duchess Mildine Juzalith de Cayenne, manages to escape with the aid of magic learned from Vita Clotilde. She reunites with Aurelia, who has been keeping Ash Carbide in her care, and begins working on her plan, Mille Mirage, to oppose the newly formed Erebonian Operation Jormungandr plan to invade Calvard. Meanwhile, the other members of the new Class VII sleep within the secret village of Eryn. There, the three of them have a shared dream in which they continue their lives as students at the Thors Branch Campus, now attending classes together the members of the Main Campus like Prince Cedric. Juna, however, begins to realize within the dream that something is missing. Together with Kurt and Altina, they visit the room of a certain instructor and realize the name they are forgetting: Rean Schwarzer. Upon so doing, they awake in Eryn.

There, they learn that they have been sleeping for two weeks and that the members of the old Class VII woke up a week before them. The old Class VII has been in a slump, dejected by the death of Millium and the loss of their leader, Rean Schwarzer. Meanwhile, the members of the new Class VII are shocked by the revelation of Musse's true identity and, Juna in particular, by the realization that Giliath Osborne is Rean's father. Despite this, Juna shakes the entire group of a slump, declaring that Rean must be blaming himself for everything and it's up to them to find him and snap him out of it. Together, the entire group devises a plan to locate the Black Workshop of the Gnomes in which Rean is being held by using magical stakes to triangulate the spirit veins throughout Erebonia. As the old Class VII sets off, the new Class VII first spends some time training in the Saint-Gral Labyrinth to regain their strength, led by Randolph Orlando, instructor of Class VIII.

The new Class VII travels to the Sutherland Province to begin their investigation. As they explore, they begin encountering other members of the Thors Branch Campus, who have been working together to do what they can to resist Operation Jormungandr. They also discover that the Panzer Soldats that they trained with at the Academy are appearing at the old field exercise sites and are linked to them through the spirit connection of Valimar. Eventually, following a lead, they make their way to ruins of Hamel, where they discover their lost classmate, Ash Carbide, who escaped from Mille Mirage's custody, only to make his way back to his old hometown. They manage to rouse him of his stupor, telling him that he is a good person who was compelled to a single bad action by the Erebonian Curse. Just as they convince him, however, a group of jaegers appears, led by Regimental Commander Gilbert Stein, as well as the members of the jaeger corps Zephyr. The group manages to find them off, aided by the members of the new Class VII, who have completed their own task, as well as the other members of the Branch Campus. They then drive a stake into the ground of Hamel, as part of the triangulation process for the spirit veins. Class VII then returns to Eryn, but the other Branch Campus members remain behind to continue their own activities, with Randy staying to aid them.

The Branch Campus curriculum is design to have parity with the main campus, and as such shares the same classes with only minor differences. This includes using the Academic Point System to determine an overall grade. taught subjects include mathematics, Erebonian history, Military Science, Art, Orbal computing, Political Economics and Combat Studies. Furthermore, Panzer Soldat training was added to both campuses in line with developments in military technology.

At times, the entire school, as opposed to singular classes, would be deployed on field studies using a specialised armoured train, The Derfflinger. The students were expecting to be able to set up the camp and eventually operate the train itself, all the while helping provide assistance to various Erebonian regions.

Unlike the main campus which elected to disband student clubs, principal Aurelia Le Guin was keen on their implementation, believing them to be of merit. A variety of extra curricular activities are also made available through clubs. The known examples include:

The Main Building (本校舎) is across the entrance gate and consists of two floors with a clocktower built on top of its roof. Within the building are all sorts of rooms, including rooms for classes for the Music and Arts Club. Class VII, Class VIII and Class IX have classes here.

Upon entering the Main Building, one finds the Principal's Office, Faculty Lounge, Tactical Conference Room on the right, and the Library, Infirmary and Storehouse on the left. In the centre of the first floor is the stairs to the second floor. Following the hallway leads outside to the courtyard behind the main building. The Library holds older issues of the Imperial Chronicle. The chessboard in the Principal's Office reveals Principal Aurelia Le Guin's interest in chess.

On the second the Arts Club and classroom for Class IX can be found on the east side, the classrooms for Class VII and Class VIII can be located in the west wing. Taking the stairs up from the second floor leads to the roof, from where students can enjoy the woodlands scenery of Leeves, enjoy the flower beds or leisurely read a magazine on one of the benches.

The Clubhouse (クラブハウス) is situated behind the Main Building. On the second floor of the clubhouse is a salon for students to wind down, with billiards, sofas and even a vending machine. Many students use the clubhouse to relax after class. In the basement are facilities for students to hone their skills. There's a five-lane swimming pool similar to the Thors Military Academy, a shooting range and a training area for melee weapons.

The Einhel Keep (アインヘル小要塞) is a unique, indoor training facility designed and built under the supervision of Professor G. Schmidt. The Einhel Keep is located east of the Main Building. Enormous mechanisms allow changing the interior of the facility at will, making it a perfect place for students to practice their combat or give new weapons a try. With a terminal serving as a control panel, it is possible to adjust the difficulty level according to the party's growth. Quartz and Accessory can also be purchased from the terminal in the keep.

It is specifically built on top of a septium vein to allow its interior to have control over the higher elements.

The Hangar (格納庫), situated behind the Academy Field. On the first floor, the Divine Knight Valimar and Panzer Soldats are stored. It is also the home of Tita Russell's orbment factory whenever she is free from class. Professor G. Schmidt's study is located on the second floor, from where Tita regularly hears jeers.

The core staff of the Branch Campus consists of the following members:

Whereas Thors Military Academy continues to offer its traditional Classes I through VI, Class VII through IX are taught at the Branch Campus. The classes are Class VII: Special Operations, Class VIII: Combat Tactics, and Class IX: Military Finance. 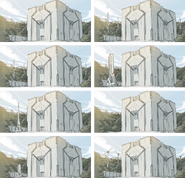 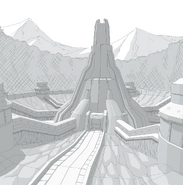