Tilia is a young girl with two blonde pigtailed braids and emerlad eyes. She wears a red dress over a black vest.

She loves reading, but doctors have recommended her to not read book with a small print. She still does it herself or asks others to read the books for her.

The Ring of Judgment

Tilia was first introduced when she bumps into Estelle Bright. She immediately apologises and admits that she is unable to see well.

After solving the incident with the artifact, Estelle and Joshua Bright leave for Crossbell to find Renne. Toval later returns to report that the client (Ein Selnate) specifically requests that the funds go the treatment of Tilia's eyes. Kai cries over the generosity while Tilia silently realises that her favourite book series is based on Ein and Toval - Carnelia

Tilia makes an appearance once again, working as a flower girl. She has come to pick flowers from the flowerbed she takes care of and wishes to bring them to Class VII as her way of thanking them for standing guard, she tells Altina Orion, who was stationed near the flowerbed.

Bringing the group sandwiches, she confesses that she feels guilty over he aspiration to realise her dream to become a writer when her brother is forced to make the money for the two of them.

When jaegers approached the time, Class VII successfully liberated their designated areas and guided the hostages to safety, but they were unable to locate Tilia's whereabouts. They find Tilia in the plaza being approached by a Panzer Soldat. When the Soldat dashes forward and smashes into building, debris starts to fall near Tilia's place. Appearing out of nowhere, Altina and Claiomh Solais protect the girl from the debris.

Later that night, Alissa provided comments on Tilia's story about flower spirits that go around saving desolate countries and filling them with flowers. The rest of the story, Tilia tells them, is about how the goddess loses her power, and that leads to fiends making the world become barren and lifeless, so the spirits have to work to try and restore her strength. She plans to have the goddess decide to fight alongside them at the end.

Tilia sees Pleroma Grass in Osgiliath Basin whilst gathering medicinal herbs and tells New Class VII so that they could use the information to help find their instructor, Rean Schwarzer. She also plays Vantage Masters. Rean is later able to visit her after being freed, in which he will find her writing a novel. Tilia is delighted to see Rean is okay. She, and the rest of the Alster residents, also listen as Rean and Princess Alfin Reise Arnor sing and play the Lute to honour Olivert Reise Arnor's death. When Phantom Thief B steals Lady Rimabella's dolls, he hides one of them in Tilia and Kai's house, to their surprise. A few days later, Tilia gives Rean a copy of Three & Nine/Chapter 7. A few days after that, she asks the Bracer Guild to defeat a monster that had been attacking Alster every night, though Toval Randonneur passes it onto Class VII instead. They learn the Mayor had been controlling the monster to try and have an excuse to evacuate to Aragon so that they would all mine there, helping the war, though in reality the Mayor and Wads planned to build facilities there to build weapons. After the citizens evacuate early as part of a plan to save the Town, Class VII try to stop the Mayor and Wads plan – though Wads summons a large group of monsters to destroy the Town and kill Class VII at the same time, as they needed to destroy the Town to be able to build said facilities – to the surprise of the Mayor as they were supposed to build them nearby the Town. Just as Wads is about to have more of the monsters take out Class VII – Tilia, Kai, Estelle Bright, Joshua Bright, Renne, and Toval arrive. The Bracers defeat the remaining monsters whilst Tilia and Kai save the hostage Wads had taken, saving the Town and foiling those plans. She later helps Sandy carry a table as part of the preparations for the Harvest festival then has fun with everyone at said festival. 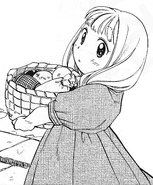 Retrieved from "https://kiseki.fandom.com/wiki/Tilia?oldid=66267"
Community content is available under CC-BY-SA unless otherwise noted.