Reachable via a 20-minute ride on the transcontinental railroad from Heimdallr, Trista is a somewhat old-fashioned town that maintains a cozy atmosphere with several shops built around a central park. Trista is best known for Thors Military Academy located in the north side of the town, with the students and faculty filling the streets. Thors Military Academy was founded by Emperor Dreichels Reise Arnor after the War of the Lions. The Old Schoolhouse behind the academy is site of particular spiritual strength.

Trista is also well known for the Spring time bloom of Lino flowers.

Trista plays a significant role as the location of Thors Military Academy where Class VII is formed and taught. The Old Schoolhouse becomes a site of particular interest to Class VII as each month they discover a new subterranean floor, eventually reaching the trial ground of Valimar and the Realm of the Great Shadow. Soon after the climatic assassination of Imperial Chancellor Giliath Osborne, Trista is swiftly occupied by the forces of the Noble Alliance using their newly unveiled Panzer Soldats. The staff and student fight back but many as soon forced to flee around the country.

Trista would remain under the control of the Noble alliance for the great part of the October War until towards the end of the conflict's climax, Class VII resolved to take back the Academy. After defeating the chosen guardians, the Order of the Lion led by Patrick T. Hyarms and selected other noble students, Class VII successfully liberate the town.

After the war, Class VII fast-track their studies and depart for new paths in life, with only Rean Schwarzer remaining to complete his studies.

The following is a list of locations found in Trista. 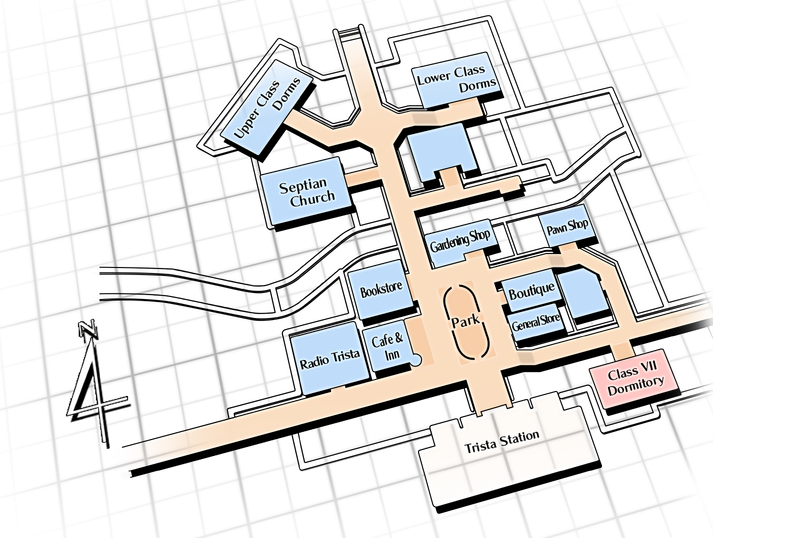 Trista as soon from Thors' rooftop