Tachi (per its Awakener)
v · e
Valimar, the Ashen Knight (《の》 ヴァリマール) is one of the seven Divine Knights of Erebonia.

One of the Divine Knights of ancient Erebonian legend, Valimar was created as vessel for a fragment of the Great One's power. Over the centuries, Valimar participated in several conflicts with other Divine Knights in practice for the day that they would all clash for the final time in the Rivalries. Over these years, Valimar was presumably awakened by many awakeners, but it is said to have come up short in the many battles it faced against its brethren-its achievements paling in comparison to those of such as the golden or the argent knights.

Valimar is the Divine Knight piloted by Dreichels Reise Arnor during the War of the Lions. Together they faced the might of the Vermillion Apocalypse and defeated it, sealing it below Valflame Palace. After the war, Dreichels would eventually seal Valimar itself in the basement of what is now known as the Old Schoolhouse behind Thors Military Academy, a special type of Spirit Shrine and it entered a deep slumber until Rean Schwarzer's arrival.

Valimar possesses the ability to increase its power by linking with secondary contractors associated with its chosen Awakener. These secondary contractors do not necessarily need to have been present at the trial, and others can be included later on should they develop a potent enough bond with the chosen awakener. As a Divine Knight, he has the ability to use stone monuments built from the Animist Traditions as a gateway to usage of the Spirit Path, with which he can teleport around the empire to areas with enough Spiritual Strength. As Valimar gains strength, it appears he gains the ability to do this to and from anywhere.

Valimar appears before Rean and his friends after they overcome the final trial in the Old Schoolhouse: the defeat of Loa Erebonius in the Realm of the Great Shadow.

Several days later, Chancellor Giliath Osborne is shot and the Noble Alliance starts its uprising. When the Panzer Soldats of the Noble Alliance march on Trista, although Class VII fights back, the Spiegel piloted by Scarlet is too much for them. At that moment, Valimar calls out to Rean, asking "Dost thou desire the power?" Rean responds with, "Heed my call, Valimar The Ashen Knight!" In response to his voice, Valimar is activated. Rean boards Valimar and easily defeats Scarlet in battle. However, Ordine, a second divine knight piloted by Crow Armbrust, proves to be an opponent too tall for Rean and Valimar. Rean is forced to leave the battlefield, leaving behind his friends in Class VII.

With its core wounded from the battle against Crow and Ordine in Trista, Valimar retreated to Eisengard Range and depleted its mana to restore Rean's health and vitality, making it unable to move from its resting location. Valimar would eventually regain its mana, but in the meantime, Rean was forced to proceed without his assistance. Until Intermission: "Aboard the Pantagruel", Valimar uses mana to open Spirit Paths to transport Rean and his friends to various locations in Erebonia. A student of Thors, Clara would eventually learn how to make customizations known as Ex-Orbs for Valimar that would improve its performance.

When the player first uses Valimar in combat, he/she has to fight enemies barehanded. After a few battles, Rean realized he could "borrow" one of the swords from the noble alliance, in which he steals one from a Drakkhen after defeating it. Rean will continue using this sword until his reunion with Crow, with Crow mentioning that if Rean wishes to defeat him, he would need to have a better weapon. Rean and the others then visited a random spirit shrine chosen by the player, obtains a Zemurian Ore after overcoming a trial and coats the sword with it. However, Rean realizes this upgrade wasn't enough, and tries to obtain all 4 ores from spirit shrines all across Eastern Erebonia. AfterClass VII accumulated enough Zemurian ore for renowned professor G. Schmidt, a leading orbal scientist and engineer, he started to create a powerful tachi for Valimar, and by using a weapon Rean was familiar with, the combat efficacy of the knight increased dramatically.

As the third faction in the civil war starts moving, Valimar is frequently summoned to participate in battle. Valimar is usually deployed to combat the Panzer Soldats deployed by the Noble Alliance. During the climax in the Infernal Castle in Heimdallr, Valimar has its rematch against Ordine, this time emerging victorious. The two knights are then used to combat the newly reawakened Vermillion Apocalypse although Valimar is the only one to escape the conflict unscathed.

Similar to Rean's growth, Valimar has regained its ability to speak coherently and express human emotions, noticably in his concern for Rean's well-being. Valimar is capable of linking with Rean's secondary contractors as they pilot Panzer Soldats themselves and taking these machines with him as he travels through Spirit Paths.

Rean often uses Valimar in training bouts with the students of Thors Branch Campus during their panzer Soldat training. The students of the new Class VII are able to put up a fight, but are ultimately unable to do much more than bring Valimar down to one knee. Mint, an alumni of Thors , acquaintance of Rean and budding mechanic is eventually brought in to help service the Campus' Soldat units, including Valimar. using the knowledge she gained from Clara, mint takes over Valimar's maintenance, and although he remarks that a Divine Knight does not require such attention due to their self regenerative abilities, Valimar states that he does have a greater degree of movement and efficiency following Mint's work.

Valimar would be called upon to fight against the Aion units deployed by Ouroboros as part of their ploy to 'retake the Phantasmal Blaze Plan' and see if a vessel could gain power through combat. The Aion's initially seem more than a match for a single Valimar, although with the aid of Class VII's Soldats, he is able to defeat each of them in turn. Notably, the Aion Type-α's spatial control abilities were enough to temporarily destroy Valimar's Zemurian ore tachi. using the channelled mana gained from its ability, Valimar was able to simulate the missing tip of the blade long enough to win the battle. Valimar was also used in battle against the reborn Zoro-Agruga, where it managed to avoid falling to the same miasma that cursed the Vermillion knight.

Valimar is summoned for the last time to help Rean fight off the Nameless One. The near-immortality of a fallen Holy Beast was far too much for Valimar to handle however and he is swiftly overwhelmed when the beast destroys his Zemurian ore tachi. Soon, Millium Orion's death in the Gral of Erebos causes Rean to lose his self-control. Valimar changes into a new form and, as feedback from its Awakener, assumes an evil-looking form.

Due to Rean's loss of self-control, Valimar is initially unable to speak at all. Valimar manages to return to his original state thanks to Arianrhod's power. Rean and Valimar win through the Rivalries and head to the final battle in Valimar's true form.

With the conclusion of the rivalries, and the defeat of Ishmelga, The remaining Divine Knights gather one last time before disappearing from the plane. Although it is said to be 'against the rules', the divine knights operate the Sacrament program at the behest of the leaders of the kinships of fire and earth to use their respective Sept-Terrion's power over physical forms and souls and restore Crow Armbrust and Millium Orion to life. Upon this act, the Divine Knights leave the plane for good.

Valimar is able to manifest his power inside of Tyrfing, Rean's new Panzer Soldat unit, when the manifestation of the great one due to Elysium's interference makes it possible for Valimar to crossover from the Beyond. This is but a temporary phenomena, but this timely intervention allows the heroes to gain the edge and buy enough time for victory to be obtained. Later on, a typed message appears inside of Tyrfing's terminal stating, 'YES REAN' suggesting that some trace may yet remain.

Valimar as he is sealed away in the Old Schoolhouse 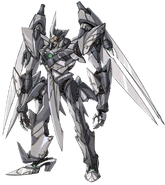 Introduction during Trails of Cold Steel II, Divertissement: "The Occupation" 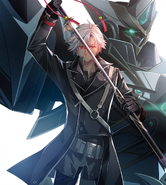 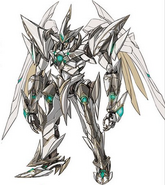 Rivalry between Valimar and Ordine 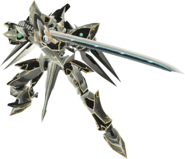 Hello there, beautiful. May I have a moment of your time?
Please be aware spoilers for Trails of Cold Steel IV may be present in the following section. Hit [Show] on the right if the show must go on. Adios, amigos!
There we go, the end of spoilers. Thank you for your time!