“Arise, o youth, and become the foundation of the world... Haha. That's all I have to say.”
— Vandyck, Trails of Cold Steel

Vandyck (ヴァンダイク) is the former principal of Thors Military Academy and a honorary General of the Imperial Army of Erebonia.

Vandyck is a very well built elderly man with brown eyes, and stark white hair and facial hair. Even in his advanced age his muscles can be seen filling the form of his uniforms out.

Vandyck carries an enormous glaive into battle, which stands taller on the ground than even himself.

Principle Vandyck is shown to an elderly gentleman of great physical built, who displays much wisdom for the younger generation to follow through. As a former Imperial general, his present role as Thor’s Headmaster portrays him as the upmost assurance to guide the promising young generation from his past military experiences. Being dedicated, humble, forthcoming, and observant, Vandyke provides the correct decisions to his colleagues, instructors, & towards his students, while being a bit sarcastic around certain cases and events. But at other times apart from his friendliness, he’ll show a serious side when occurrences that would endanger the lives of innocent civilians and his students take place. No matter what, Vandyke is a man of many surprises besides being Headmaster, for he will not hold back in the battlefield and admire the ’Spirit’ of others against the odds.

He is an extremely dutiful general, carrying out orders despite any personal feelings and shows great loyalty to his country, as seen when he resumes the position at the head of the army upon Giliath Osborne's request.

Vandyck was born in S.1134. He originally served the Imperial Army of Erebonia, where he ultimately held the rank of supreme commander and title of General. He was feared by his enemies, who could sense his presence and their doom from selges away.

In S.1194, after the Hundred Days War, General Vandyck retired from active duty at the age of 60. He requested Brigadier General Giliath Osborne to succeed him, but he declined the offer in favour of Emperor Eugent Reise Arnor III's plea for Osborne to become the new Chancellor.

Despite having retired at the time, Vandyck was still powerful enough to be considered one of Erebonia's most strongest men, alongside Matteus Vander, Victor S. Arseid and Wallace Bardias.

After retiring from the Imperial Army, Vandyck began teaching at Thors Military Academy and eventually became the academy's principal. Even as a principal, however, Vandyck had no direct control over the running of the academy.

In the spring of S.1203, Principal Vandyck offered former bracer Sara Valestein a job as an instructor. He also hand-picked the other staff members. Vandyck gave his former student, Olivert Reise Arnor, full backing to establish the experimental Class VII in S.1204.

He asks the Class VII to explore the changing interior of the Old Schoolhouse of the Thors Military Academy. Prior to the start of school year S.1204-1205, Vandyck had never witnessed nor heard that the interior of the building changes.

Since the building was erected by Emperor Dreichels Reise Arnor in S.985, strict orders regarding the building have been passed down from principal to principal ever since. He proclaimed that the old schoolhouse was to be preserved as is until the 'Promised Day' arrives, which appears to be related to the reunion of Rean Schwarzer's Awakening of the Divine Knight Valimar.

he moves to defend the academy during the onset of the October War, disbaling a Panzer Soldat unit in one swing. During the Erebonian Civil War, Principal Vandyck was locked up in the academy under protection of the Order of the Lion, led by Patrick T. Hyarms.

With the intensifying militarisation of the academy after the civil war, Vandyck was replaced as principal, returning to the military.

Vandyck returned to the military in part due to Chancellor Osborne's orders, requesting that he serve as the commander of Operation Jormungandr. Though he knew of the Great Twilight and the Erebonian Curse, he was obliged as a soldier to fulfill his duties. He first appeared alongside Governor General Rufus Albarea at St. Ursula Medical College for a secret visit to Eugent Reise Arnor III, who was being treated at the hospital.

After seeing off Rufus, Vandyck appeared to be aware of Class VII's presence and returned to the hospital to speak with them, informing them that he did not know where Rean was and pretended to be unaware of Eugent's presence in the hospital. He was impressed by new Class VII's resolve to rescue Rean and gave them words of encouragement before he left.

Vandyck is teleported onto the Arseille II as part of a line up of Erebonia's greatest warriors. After having their weapons enchanted by Vita Clotilde and Roselia, Vandyck and the others are capable of repulsing the concentrated blast from Reverse Babel's main armament- a weapon strong enough to eradicate Juno Naval Fortress in a single blast. 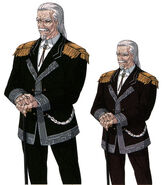 Vandyck and Cassius Bright agreeing to a ceasefire