190 cm[1]
v · e
Wald Wales (ヴァルド・ヴァレス) is introduced as the owner of the clubhouse Ignis in the Downtown District of Crossbell City and leader of the delinquent youth gang known as Saber Vipers.

Wald is a large muscular young man with brown hair (although the tip is styled and colored blonde) and brown eyes. He wears a small red sleeveless jacket which exposes most of his muscular physique and loosely fitting red pants covered with black belts and chains. There is a red choker around his neck and he wears studded wristbands.

As a knight, Wald wears a long red and black coat with white along all seams, a black waistcoat with a white edge, white shoes, brown trousers with white stripes and glasses. The medallion of the Gralsritter hangs from his neck.

Wald uses a wooden sword in combat. Previosuly this was wrapped in a chain., but his new version is plain wooden with the Septian Church insignia carved into it.

Wald is introduced as a muscular, impetuous martial artist, forceful in both appearance and personality. He is fiercely aggressive and loves to pick fights, but at the same time is an inspirational figure for his gang. he is passionate about his rivalry with Wazy and sunk into a depressed state when the former left their lifestyle. He is devoted to studying but will not stand for anyone who belittles him.

It is unknown where Wald was born. He was raised by only his alcohol addicted father. After his father's death, he moved to Downtown District. He felt really lonely, however, and therefore established the Saber Vipers. He resorted to raw power ever since.

The rivalry with Wazy Hemisphere, leader of the youth gang Testaments, appears to define his existence, a trait admired by his fellow gang members. Upon their first visit to the Downtown District, Wald makes sure to intimidate Lloyd Bannings and the rest of the Special Support Section. However, during Trails from Zero, Finale: "Crossbell's Longest Day", he fights off the brainwashed Guardian Force members together with Wazy so the SSS can make their way to the Sun Fort.

The life Wald has gotten used to drastically changes at the beginning of Trails to Azure, when Wazy joins the SSS as a temporary associate member, leaving his rivalry with Wald behind him. Wald challenges Wazy to a last duel. Wald loses and realises that Wazy had been holding back all this time. He falls into a depression and utterly humiliated, he spends his days indulging in drinking.

He is then scouted by Mariabell Crois. She provides him with blue Gnosis as her test object. As Gnosis enables the "spirit to stimulate physical change" and Wald hungers for power like no other,[2] Mariabell concludes that he has great compatibility with the drug and that he can Demonise without losing control.

During the Assault on Crossbell City, he destroys the Downtown District in his demon form. He even tries to follow up Mariabell's advice to destroy the other Saber Vipers in order to gain more power, but is stopped in his tracks by Abbas and Ashleigh.

Still anxious over his relation to Wazy, Wald comes to the realisation that it had been his best friend, not his sworn enemy, all along. He battles the SSS again in the Azure Tree, but Wald is overwhelmed by their immense growth since their last battle. Even when losing, Wald's deep inner strength allows him to push on. The battle concludes with a duel against Wazy, who now uses his Stigma, and results a loss for Wald. He wishes the group good luck before losing his consciousness. Wald realised he was a mere test subject for Mariabell, but did not particularly hate her.

Afterwards, Wazy and Abbas take Wald back to Arteria for medical treatment of Gnosis after-effects. In spite of several limitations, Wald studies diligently at the Septian Church during his treatment he becomes officially acknowledged as one of Wazy's Squires. Although his appearance suggests he has calmed down, Wald still possesses his aggressive ambitions as a delinquent and continues to see Wazy as his rival. The two return to Crossbell and reunite with their gangs who have all move on to careers, but after an ill-thought comment, the gangs are soon butting heads again, requiring Noel Seeker to sort out Wald and Wazy from fighting. Wald is part of the efforts to oust the Imperial Defence Force from Crossbell.

Wald participates in the final battle against Reverse babel, by supporting the battle form the bridge of Wazy's Merkabah. 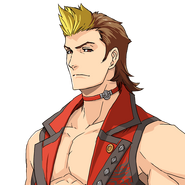 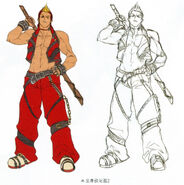 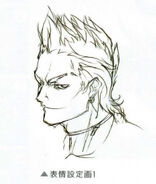 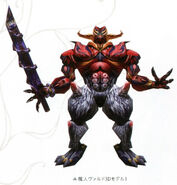 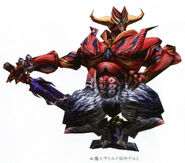 Demon Wald amidst the ruins of the Downtown District. (Trails to Azure, Chapter 4: "Crossbell's Fate")

Wazy defeating Wald in their duel in the Azure Tree (Trails to Azure, Finale: "The Path We Chose") 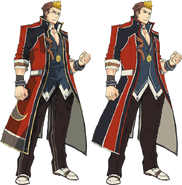