v · e
Wallace Bardias (ウォレス・バルディオス), also known as the Black Whirlwind (), is introduced as the Brigadier General () of the Sutherland Provincial army. He is known for his unparalleled spearmanship.

Wallace is a tall man with Nord Highlander features, swept back brown spiky hair and blue eyes. He has a scar on his right cheek. Wallace wears the uniform of an officer of the Sutherland provincial army, turquoise blue and white. He wears this uniform loosely, with buttons left unfastened and a navy blue shirt visible. he also wears white trousers and brown laced up boots.

Bardias is a jovial and honorable man, who is willing to fight for what he believes in. He follows the chain of command, even when his own experience and judgment suggests otherwise. Not one to shirk from a challenge, he offers to spar with newcomers regularly. He offers his friendship freely and listens to the considerations and feelings of others. He takes great pleasure in the arts and music.

Wallace is a descendant of the original Nord Warriors that assisted Dreichels Reise Arnor in the War of the Lions and subsequently moved to Erebonia. He is the successor of the Bardias school of spearmanship, originating in Nord.

Wallace attended Thors Military Academy and became the captain of the Riding Club. Aurelia Le Guin, as the Fencing Club leader, made it her mission to defeat all of the other clubs and bring them under her heel. He accepted her challenge and they fought on horseback. The duel ended in a draw, although her strength, beauty and spirit mesmerized him. Nonetheless, they still maintain a professional relationship and he serves as her right-hand man.

He is one of Erebonia's top 5 warriors (along with Vandyck, Aurelia, Victor, Matteus) after the Great Twilight.

Wallace is potted visiting Legram with Aurelia, and is noted to be the commander of the Sutherland provincial army. He is mostly active in the West side of the Empire during the October War, where the fighting is fiercer. He left for the East only to visit Legram and later when he is seen using his Soldat in the battle outside Heimdallr.

Wallace is stationed at Juno Naval Fortress as commander-in-chief. He is present when Rean Schwarzer and new Class VII present themselves for their field activities in Sutherland. One of the tasks includes a training battle after which Wallace spars with Rean.

He leaves the fortress when Wilhelm Ballad orders him to retrieve the railway guns stolen by Ouroboros. There he confronts McBurn, allowing him little leeway, and managing to deflect some of the black flames with his spearmanship techniques.

Wallace travels to Heimdallr for the Summer festival and is present at the party after the operation to Apprehend Calvardian agents is completed. Upon the summoning of the Gral of Erebos, he moves to secure the Pantagruel, beginning the Weissland Army.

He commanded the Weissland Army alongside Aurelia. He assists Class VII in various manners, piloting his Panzer Soldat included. During one of Gaius' bonding events, Rean contacts him to help Gaius out with his problem. Wallace duels Gaius on even terms, prompting him to call a duel on horseback in which he prevails. Wallace leaves to let his horse around, during which Gaius realizes what he was missing. When he returns, Gaius challenges him to another duel, which he accepts and the duel ends in a draw.

Wallace takes command of the Weissland Army's forces on the day of the Great War, taking the Pantagruel to the Nord highlands where he takes part in the battle in his Hector unit.

After the events of the Great War, he is promoted to Major General Wallace (ウォレス). He is later part of the Erebonian Martial arts tournament held after the Imperial Wedding where he teams up with Olaf Craig. The pair fight Rean and Duvalie's team, but are ultimately defeated in the first match.

Wallace is introduced as potential marriage for Mary Altheim after thoughts of settling down arise and due to Makarov, who was formerly courting Mary, seems to be going nowhere with their relationship. He is one of the most prominent bachelors in Erebonia, but had never accepted a matchup until now, stating their previous interaction in Mishelam was enough to pique his interest after a conversation with Aurelia. In a conversation with Mary, he states that he could not let the situation pass, that he was angry with Makarov for making her wait and that he was fascinated by her sincerity. He acknowledges Makarov' and Mary's feelings but offers her the Margaret's Corsage- representing true love to show his feelings. He gives her time to think about it.

The next day, Mary states he cannot marry him, as she loves Makarov. Wallace acknowledges this, asking why but also bringing up the possibility that the love is one-sided. Aurelia states Wallace's merits and soon Makarov himself arrives with the fruits of his project, where he finally makes a move. Wallace surrenders after seeing Makarov's conviction. Wallace and Aurelia's action suggests that his move was a plot by Aurelia and himself all along to help the couple out, with Wallace perfectly willing to step in should Makarov fail to prove himself. Afterwards, he and Aurelia chat and reminisce about their past, before going off to spar together like old days.

Wallace is one of the five 'greatest warriors of Erebonia' summoned to the Arseille II in the final battle against Reverse Babel. Wallace and the other 'greatest warriors' use their ultimate strikes to open the path for youngsters to destroy Elysium. His spear is enchanted by Vita Clotilde and Roselia, allowing him to help deflect the energy beam released from the Keraunos superweapon. 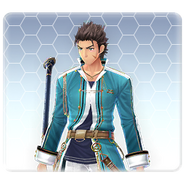 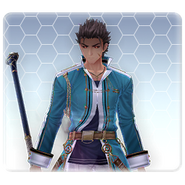 He is one of the disciple of Gunther Barkhorn.