Walter is a tall, and muscular man with a small well-kept beard and spiky, dishevelled orange hair. He wears a loosely buttoned shirt beneath a black suit which is adorned with a metal band around his upper arm. he also wears a metal pendant around his neck, visible through his loosened shirt. His eyes are typically hidden beneath round sunglasses. Walter wears fingerless gloves reinforced with metal plates, typical of other Taito users. In most of his appearances, Walter is also seen smoking.

Walter later returns with an updated appearance. He now wears a bright pink pinstripe suit with an upturned high collar, worn untucked and loosely buttoned. he also wears leather trousers with black cords and a matching jacket with the word 'Wolf' visible on the shoulder in silver. His shoes are now black and he wears matching jewellery consisting of connected silver plates. He keeps his armor-plated gloves with the Ouroboros emblem.

Although Zin Vathek and Kilika Rouran described him as being kind and competitive in the past, Walter is now much more cruel, sadistic, and sociopathic after falling to the allure of the "Murderous Fist" path of the Taito Style in which he began to lose himself.

He lives for the thrill of combat and does not like holding back. Walter is an extremely strong hand-to-hand combatant, displaying physical feats well beyond average, including jumping from incredible heights without injury and demolishing the considerable Grancel Castle gate in a single blow. While he does boast of his own abilities quite a bit, he notably does not toy with his enemies as much as his fellow Enforcers, preferring to cut to the chase. Walter is a hardcore fighter who loves to battle with challenging opponents. He is attracted to thrills and power and maintains the sharp predatory instincts and brutality of a wild animal. He will show no mercy to anyone regardless of whether they are women or children which earned him the nickname of "Direwolf."

Although extremely skilled, he rarely practices his craft, considering to be "good for street performances" and relying on it to defeat any enemy, most of whom are usually weaker than him. This in turn makes him overconfident, as he is unprepared to face an opponent stronger than him; even Zin admitted that he is Walter's lesser.

Prior to joining Ouroboros, Walter was in love with Kilika and shared a strong bond of friendship with Zin. Although it is implied he still has feelings for Kilika, he does not attempt to approach her out of shame due to killing her father.

Before joining Ouroboros, Walter practised Taito school martial arts alongside Kilika Rouran, his lover at the time, and his good friend, Zin Vathek, under the guidance of Master Ryuga who was Kilika's father. At one point in time, he was Kilika's lover and the expected successor of the Taito Style. However, Master Ryuga decided to give the successor seat to the other candidate Zin instead- something Walter couldn't accept. Walter asked Ryuga to let him fight against Zin but was told Zin would have just let Walter win unconsciously both in martial arts and affairs of the heart due to his own lack of self-confidence. Walter then started to become obsessed with the "Murderous Fist" path of martial arts

In S.1196, tragedy struck when Kilika's father challenged Walter to a duel, but lost, forfeiting his life in the process. Walter then chose to disappear and was soon recruited into Ouroboros. Unbeknownst to him, Ryuuga was terminally ill with cancer at the time. Ryuga's intention all along was to teach Walter and Zin the way of life of a martial artist by choosing to die by the hand of his number one disciple, Walter.

Walter once duelled the assassin Yin in Calvard, as the latter revealed during a conversation with Renne in Trails from Zero. It is unknown if this happened before or after the S.1202 Gospel Plan.

In S.1202, Walter arrived in Liberl on the command of Georg Weissman and urging of Leonhardt. He was then assigned to supervise the experiments involving the latest Gospel in the Zeiss region. The Gospel was placed into a large orbment that was capable of generating tremors and earthquakes by agitating the Septium veins, as well as attract abyssal worms . He used the device twice, once on Wolf Fort and the other on the City of Zeiss on the day that Estelle and co. arrived in the Zeiss region. Having previously heard that Estelle and co. were strong opponents, Walter decided to lure them out by making regular appearances at the earthquake sites. Done with the trials, he then uses the machine for real by attacking Leiston Fortress which allows Estelle and co. to track him to his base in the Hot Springs Fountainhead located in Elmo Village.

Estelle Bright's group confronts Walter and he introduces himself as Enforcer No. VIII: Walter the Direwolf. Walter expresses his desire to harm people and causes as much destruction a possible, citing how he likes thrills and suspense, especially the kind that pushes someone to the edge of death. Walter summons several Abyss Worms. After watching Estelle's group defeat the monsters, Walter mutters to himself that he may have overestimated them and declares to the exhausted party that their fight was pathetic. Estelle tries to stand up against him but Walter prepares to show no mercy. Walter is then surprise attacked by pounded on by Zin Vathek who comes to the party's aid. The two briefly exchange comments with Zin stating how the master would be disappointed, with Walter apathetic. Zin reveals Kilika is in Zeiss. Walter is surprised but pulls back, shutting down the device and leaving.

Walter is the seen again during the aftermath of the Mist Demon Incidents in Rolent, arriving to pick up Luciola at Emelas Tower in a airship. he is one of the enforcers present in the Sanctuary on board the Glorious when Estelle bright is taken onboard and also the enforcer assigned to Amberl tower to disable it. Walter accompanied his fellow Enforcers Bleublanc, Luciola and Renne to attack Grancel in order to capture Queen Alicia and Princess Klaudia, destroying the castle gate in the process. The Enforcers capture the Queen and Princess, but are confronted by Estelle's party as they attempt to leave. This in turn allows Maximillian Cid and Alan Richard to intervene, just as the Special Forces arrive to drive the jaegers out. Walter retreats alongside his fellow Enforcers, leaving their hostages behind.

Walter was the second Enforcer fought by the party at the Axis Pillar on the Liber Ark at the climax of the Gospel Plan. Should Zin be included in the player's party, after defeating him, Zin reveals to Walter the truth about his fight with Ryuga. Wondering how it is possible that Zin is so much stronger than him now, Zin replies that, as Walter was always his superior in martial arts ability, he would have won if he had kept practicing the Taito Style. As Walter abandoned Taito, Zin was able to continue perfecting his technique during his travels with Estelle and eventually surpass Walter's evil fist. Walter laughs, revealing that Master Ryuga always believed that Zin was the superior student, and only held himself back when fighting his best friend, Walter. After being told the truth of the duel between Walter and Ryuga, Zin replies that Ryuga already had terminal cancer, and used Walter as both a tool to show the dark side of fist, and as a way to die honorably in combat against one of his own students. Walter cackles in disbelief, seemingly on the verge of having a breakdown from this revelation

Walter and Zin then have a direct one-on-one battle, charging up their Taito before lunging at each other. Although it appeared as if Walter had won as Zin staggered first, Walter remarks that Zin held back yet again; He laughs, lights one more cigarette, asks why they have to "taste so good," and finally falls unconscious with Zin being the victor. Zin states that had Walter not neglected his own training, he would have defeated him, and that he was simply unconscious. The party decided to leave him there; fortunately, Walter was able to regain consciousness and escape before the Liber Ark collapsed.

If Zin was not included in the player's party, Walter simply leaves in anger upon being defeated.

Aboard the Glorious following the collapse of the Liber Ark, Walter, still tired from his duel with Zin, chatted with Bleublanc. Walter lamented Loewe's death, angered that he never got a chance to fight him and that he was always putting it off when Walter requested.

A copy of Walter is recreated in Phantasma's Sixth Plane and the Black Ark to act as a Guardian. He is fought in the Sanctuary alongside Luciola and Bleublanc. These copies are fully aware of Kevin Graham's true power and allegiance and mock him for being just as much of a monster as they are. They are ultimately defeated and Kevin's party proceed to the Farewell Arena.

Another copy of Walter is fought alongside Kilika in the The Arena, as part of 'Team Taito'

Although he has not appeared on-screen since this scene, Walter is confirmed to still be active in the Society. During Operation Jormungand, Campanella praised Estelle and Joshua for bypassing Walter's blockade off-screen, confirming that he had contributed to the Society's efforts during the operation.

Walter returns in Calvard and appears to be in pursuit of a young man. During these events, he encounters Van and the Spriggans. Walter mentions a certain "Arkride" whom he owes a lot to, suggesting he is familiar with someone sharing Van's name. 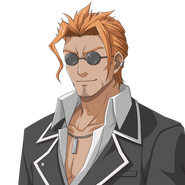