Zin's most striking feature is his middle-aged tall, muscular physique. He has long, brown hair tied back in a single pony tail. He dresses in the style of his home country Calvard, sporting loose-fitting trousers bound with metal bands, a purple sleeveless tabard over an open collar shirt, flat steel toe-cap shoes and a large yellow scarf around his shoulders. Zin's outfit features several features useful for defensive martial arts, such as bandages around his upper arm and shin, purple hand wraps and metal embellishments on his shoes.

Zin returns in Kuro no Kiseki with a predominantly dove grasy and blue outfit. he wears a long grey coat with purple panels and stripes and gold embellishments. he wears long baggy trousers tucked into eastenr style boots and wears a large white belt aroudn his waist with the two ends buckled to form a cross. Around his neck, Zin wears a thick blue scarf with a white zigzag clip.

He makes use of metal arm braces as his weapon of choice, featuring a blue colour, silver trim and red ties. The guard extend up to his forearm where it ends in a tapered point. Beneath his braces Zin wears padded yellow cloth braces which are in turn covering his purple hand wraps.

Vathek is a friendly and dependable man. He readily comes to the aid of others and is all too willing to lend his assistance to strangers and those he has recently become acquainted with. Zin has historically lacked self-confidence and resolve, once believed by his master to be holding back his true strength out of feelings of inadequacy and self-imposed doubts. Zin loves to drink a lot and often pulls out a large gourd shaped vessel to celebrate. He acts like a big brother figure to everyone despite his excessively huge and scary stature.

He is a practitioner of Wushu (martial arts), specialised in the Taito school. Although is he not considered among the strongest of the A-rank bracers, he is still able to rival Walter. Zin is an old acquaintance of Cassius Bright and Scherazard Harvey.

Zin was once a student training under the Taito Style in Calvard under Master Ryuga Rouran with his fellow pupils, Kilika Rouran and Walter. After his master's death, he continued to train and eventually became one of Calvard's A-rank Bracers, establishing many guild connections in and out of the Republic. His reputation grew to such an extent that the republic's shady syndicates consider him a threat. Zin was one of many bracers involved in the large scale, cross-national operation to dismantle the D∴G cult.

One of his connections was Cassius Bright, a fellow bracer whose rank was one grade higher. At one point during a joint operation, Zin accepted a request from his old friend as reciprocation for a favor owed. That request was to assist his children training to be bracers back in Cassius' home country of Liberl, where Zin planned to participate in the Grancel Martial Arts Tournament.

Zin is introduced when he visits Liberl per the request, and in absence, of Cassius Bright. Zin states that he owes Cassius a favour from his time in Calvard. He travels with Estelle and Joshua Bright and attends the martial arts tournaments in City of Grancel with them. He would later extend his assistance in helping the young pair access the Calvardian embassy and even played a great role in reaching the depths of the Sealed Area in order to stop Alan Richard's plans for a coup.

Zin makes his reappearance saving Estelle bright in Zeiss, from thereon joining her party once again to investigate the mysterious earthquakes that were troubling the region.

Trails in the Sky SC addresses the relationship between Zin, Bracer Guild receptionist Kilika Rouran and Ouroboros Enforcer No. VIII, Walter. Zin and Walter were originally disciples of Ryuga Rouran, Kilika's father, in the Taito school of martial arts. When a duel between Ryuga and Walter led to the death of their master, the two disciplines went into separate ways.

Now his enemy, Zin and Walter meet again during Ouroboros's execution of the Gospel Plan in Liberl. It turns out Walter had been behind the series of earthquakes affecting the area through the use of a large orbment that was agitating the Septium veins. Zin makes his reappearance saving Estelle from Walter, from thereon joining her party once again. Walter and Zin would come into conflict with other once more atop the Carnelia Tower but it would be onboard the Liber Ark and within the Axis Pillar where the fated pair would have their decisive duel.

Zin learns from Walter that before their duel Ryuga proposed that his his most talented disciple would inherit the Taito school. Walter demanded a match with Zin to determine the successor and after he kept insisting Ryuga proposed a deathmatch with Walter in Zin's stead. Walter's victory meant the death of their master. In turn, Zin informs Walter that Ryuga had already been diagnosed with a malignant tumour and wouldn't have had long to live. Their final battle in Liberl ends with Zin's victory.

Zin makes it known to the Liberl Bracer Guild branches that he will be leaving back for Calvard. He meets with Elsa Cochrane and Kilika at the Elmo Village Maple Leaf Inn to discuss plans for the future and their home country.

Zin is one of the 16 companions brought into Phantasma. Kevin Graham's party releases him from a crystal and from thereon, he joins their efforts to clear the planes and return to reality. Zin is required to be in the party before the The Arena can be accessed.

Zin has been working together with Fie Claussell. After cancellation of the Great Twilight, Zin was one of the guests at the wedding reception of Olivert Reise Arnor and Scherazard Harvey's wedding.

In late 1207, he is recommended to be promoted to S rank. However due to feeling neither his skills or achievements match up to Cassius Bright's, he remains hesitant about accepting.

Zin is one of the most prominent bracers in Calvard but has of yet not accepted the promotion to S-rank. Upon encountering Van Arkride whilst on patrol with felow bracers Alvis and Elaine Auclair, Zin is jovial and friednly, despite the other bracers' reservations about the way Van operates. Due to the high volume of workload the bracers have due to the activity of Almata, Zin invites Van to take on some of thier work which they would pay for, including monster exterminations. Van accepts this offer.

Later, Zin invites Van to join him in an information exchange in Edith's Dark-Light district, they meet with Cao Lee of Heiyue, Walter Kron of Ouroboros and A mysterious hooded figure. The topic of dicsussion is the activity of Almata, but Walter and Zin's history quickly rekindles their rivalry and the two want to start a fight, roping in Cao and Van. The brawl is stopped before it can start and destroy the area, with Kilika Rouran arriving with the rest of Arkride Solutions Office, Celis Ortesia and Rion Balthazar in tow.

Zin is amongst the forces representing the Bracer Guild in Oración and leads their efforts there when Almata threaten the city. accompanying him in the Death game are Fie Claussell and Elaine. Should Van choose to partner with the Guild, Zin will happily accept but wants to test the group first as he is not okay with civilians becoming involved. Should Van elect to align with a different party, Zin will be encountered in the ruins on the first day with the other bracers. They would otherwsie be happy to move on and not fight but Zin is similarly unhappy about van involving civilians and wanst to test him. The bracers through Zin offer to take anyone Van may capture.

Zin is present in the capital on Revolution Day, ending up in the Dark-Light District trying to get into a fight with Walter again. Lucrezia Isselee and Shizuna Rem Misurugi are also present and the teams end up shuffling. When Pandemonium envelops Edith, Zin may come to Van's assistance to help save Renne from the diabolos sphere. He also helps take down the diabolos pillars so Van's group can enter Genesis Tower.

In the approach to the New Year, Zin sees off Fie back to Erebonia at the train station. 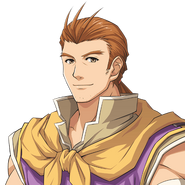 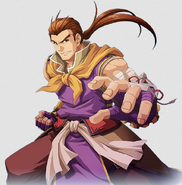 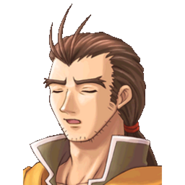 S-craft in Akatsuki no Kiseki 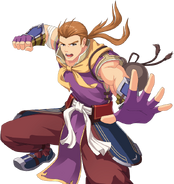